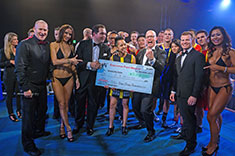 EFN IV continued to receive donations after the event, surpassing the ¥6mn mark.

Ever wondered how it would feel to get in a boxing ring in front of over 400 screaming fans? On 23 May in the Grand Hyatt Tokyo ballroom, 16 brave souls—five of them British—did more than wonder as they fought in the “Tony Evans and deVere Group Executive Fight Night IV: Fists of Fury” event.

Those who are successful in the try-outs are put through an intensive 12-week programme administered by former professional fighters-turned-coaches Ona Davaa and Jan Kaszuba. “It’s certainly not for everyone”, said Schmid, owner and personal trainer at Club 360. “But our executive fighters go through a journey that leaves them stronger mentally and physically”.

So far, the black-tie Vegas-style events have raised over ¥23mn for charities. Of the five Brits who competed in the latest contest, four of them emerged victorious: Andrew “Dragonbawl-Z” McKinley, Elizabeth “Hot Hands” Taylor, “Savage” Sam Yusef and Clark “Tornado” Johnson.

Their efforts, along with those of other participants, have helped Shine On! Kids in their work to assist children battling cancer and other serious illnesses. 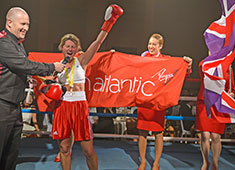 Taylor was a former inflight service manager with Virgin Atlantic.

At each Executive Fight Night (EFN), an overall winner of the evening is chosen by coaches and organisers. Elizabeth Taylor, a former inflight service manager with Virgin Atlantic, took the prize in the May event. Taylor is a mother of three young boys; the wife of Nick Taylor, Virgin Atlantic country manager Japan; and a karate black belt.

Why did you try out for the EFN?
Taylor: I did it for charity and for myself, to get fit. I’ve always been a runner, and I competed in a couple of marathons before having children. I love having goals and following a programme. This keeps me motivated.

Boxing was totally new for me. Training was the highlight—in a way being in the ring was like a performance, to see how much you learned in training. The experience brought back the fighting skills inside me.

How did your family react?
[My husband] Nick kept me motivated. We moved here about a year ago, and ever since attending our first EFN he had encouraged me to take part. The highlight of the night was my dad coming [from the UK] to watch. I did a dance out to the ring and blew him a kiss on the way.

What was a typical day like during the 12-week training?
We had to go to Club 360 twice a week, but I personally didn’t think that was enough, since I was new to boxing, so I had two extra sessions with Jan [Kaszuba] each week. I also ran five days a week. I found that running at 5am worked best for me, to still get my kids ready for their day.

I chose the evening training sessions, and then Saturdays we [EFN participants] would all meet at the Imperial Palace to do two laps, 5km each, plus some relevant pad work and shadow boxing exercises.

Tell me about some of your challenges.
Throughout the training, people go through lots of ups and downs, and there is a great psychological aspect to it. I lost my confidence at the beginning because I was new to this.

In the second round of my match against [my opponent] Maya, I felt rising pressure when she landed a few great punches. [My ring coach] Ona-san always psyched me up though, and I still laugh when I think about his words: “I will tell you again Liz, you are heavier than her, you have more stamina and you hit harder”.

Maya is 11 years younger than me and had better technique. I honestly believe that the only reason I was chosen overall champion is because it was such a great fight and we both did our absolute best.

How did you balance your other responsibilities with training?
It was definitely a challenge not seeing my husband very often and having the poor kids rotate through lots of babysitters! I didn’t miss one class, though.

I never got to do boxing class on Fridays, which I wanted to do, because that’s movie night with my boys. They always come first. I think mums are naturally good at juggling things.

How did the experience change you, physically and otherwise?
Boxing is a great all-around sport and keeps you really fit. I’ve got muscles in my arms now and even a six-pack! This also showed me that, when I put my mind to it, I can do anything. I always give 110% and commit fully to any activity.