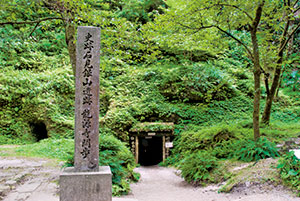 A monument marks the Ryugenji Mabu Mine Shaft.

Visitors to Shimane Prefecture would be remiss were they not to visit one of the region’s best-kept secrets: the silver mines of Iwami Ginzan in Oda City.

A trip to the preserved town, where the silver miners lived, is also recommended. It features an area designated an Important Preservation District for Groups of Historic Buildings. One can also visit the Iwami Ginzan World Heritage Centre, which exhibits items that have been excavated from the mines.

As Europe expanded its interests across the world during the 16th century, the silver mines of Iwami Ginzan became a supply hub for Europe and other parts of Asia, accounting for around one-third of global silver production.

Registered as a United Nations Educational, Scientific and Cultural Organization World Heritage Site in 2007, the Iwami Ginzan mines are a window onto a prosperous past. Although the mine stopped producing silver in the early 20th century, at its peak the town was home to some 200,000 people. Now, there are only 400 households in the area.

Digging for silver at the mine was done entirely by hand, and evidence of the work can still be seen today. There are around 600 outcroppings and mine shafts, as well as flat tracts of land where refineries and dwellings once stood.

By the 17th century, the mines were of such value that they were fenced in for protection, and tight regulations were put in place. 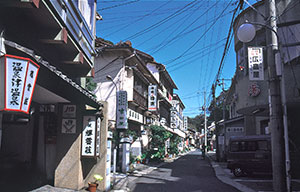 Yunotsu Town is home to many hot springs.

Today, visitors can walk through the tunnels of the silver mine and along mountain transport routes, which connected the mines to Yunotsu, a port town about 12km away. The area is surrounded by immaculately maintained nature, and the port area boasts a long history of hot springs.

After allowing a few hours to explore the mines, a 2km walk leads to a living museum of preserved dwellings where the miners and administrators lived—the Omori–Ginzan Important Preservation District for Groups of Historic Buildings.

The House of the Kawashima Family, for example, is a perfectly preserved residence of a local official. Dating back to the 19th century, it is a time capsule, showing the life of a high-ranking samurai.

What is more, at the Rakan-ji Temple’s Gohyakurakan Shrine, one comes face to face with 500 seated Buddhist arhats, each engraved with an individual expression. These sculptures commemorate the lives of those who died working in the mines, and honour the ancestral spirits.

Omori–Ginzan pays homage not just to the past, but also to the present. A number of businesses have sprung up in the area, including gift shops and restaurants. An interesting one is Iwami-Ginzan Seikatsu Bunka Kenkyusho Corporation, a family-run business that blends past and present through high fashion, household goods, a café, lodgings and a gallery.

If you seek a trip with a difference down memory lane, you cannot get much better than a visit to Oda and its illustrious offerings.