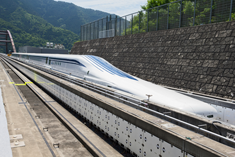 JR is going ahead with the maglev train despite concerns over a shrinking population and diminishing demand.

Central Japan Railway Co. has resumed trials for the world’s fastest magnetic levitation (maglev) train, while the UK is reconsidering its own high-speed rail projects, media reported on 29 August.

The maglev train will transport passengers between Tokyo and Nagoya in 40 minutes, compared with the current 95 minutes, according to JR Central. In the UK, projects such as a link between London and Birmingham have been derailed due to cost and demand concerns.

However, JR Central has displayed no such worries, as the firm has the highest cash flow of any railway operator in the world.