In many countries, people bring omiyage (souvenirs) to their workplace on returning from a holiday. In Japan, this custom shows an appreciation of colleagues and bosses, who have taken on extra responsibility during one’s absence, and is usually accompanied by phrases such as “apologies for any inconvenience caused as a result of my holiday”.

For many Japanese staff in this cultural setting, diverting work responsibilities to take annual leave can be stressful. Therefore, it is difficult for many to switch off from work mode and enjoy their holiday.

A Randstad survey, carried out in 34 countries, of workers aged 18 to 65 shows that, worldwide, more male workers are required to work outside their usual working hours than are female employees. Moreover, this gender gap in Japan is greater than the global average.

The survey also shows that many male staff must work and/or respond to phone calls and emails outside working hours. This trend is especially strong in Japan, where the gender gap in related questions is on average 1.5 times larger than global figures.

While about 45% of respondents in Japan reported having difficulty switching off from work, the global figure is 26%. This places Japan 33rd among the 34 countries surveyed.

In Japan, as women’s participation in society advances, support from firms—such as assistance to work while raising children or caring for elderly family members—is becoming more common.

However, Japanese firms, often referred to as “men’s societies” and generally managed top down, reflect the ongoing assumption that “men work fulltime”. For these men, it is said, it is difficult to take even one day off because of illness—let alone to work shorter hours as a result of family issues. As a matter of fact, many male employees visit counsellors because they cannot bear the stress of their work.

Organisations in which staff do not have good mental health can lapse into a vicious cycle of decreased productivity and unsuccessful results. Firms need to try to understand their employees, create a culture that encourages them to share their business and personal concerns, and seek ways to support their staff as a team. If businesses are to continue growing, despite shrinking workforce numbers, it will be necessary to have a culture that enables staff to show the best of their abilities on a sustainable basis. 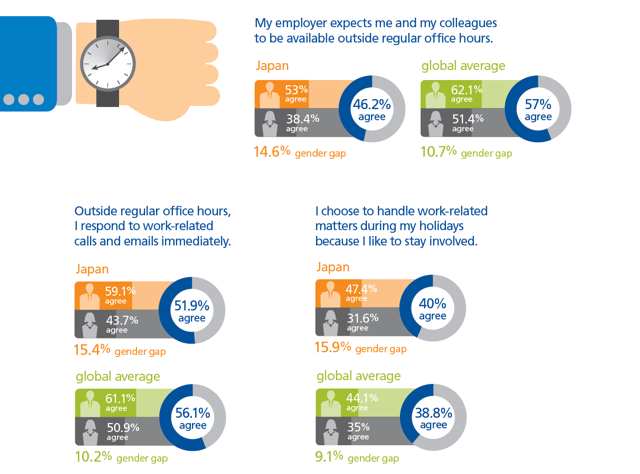