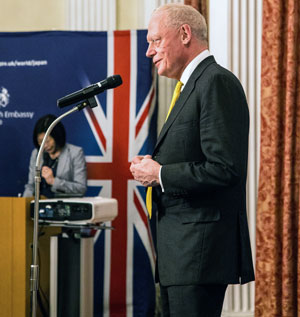 Global Investment management company Standard Life plc can trace its history in Japan back to the 19th century, when it underwrote insurance in Yokohama. But it was only in June last year that the firm moved into its new office in Otemachi, Tokyo, having secured a licence from Japan’s Financial Services Authority (FSA) two months earlier.

Heading the new operation—Standard Life Investments (Japan) Limited—is Chief Executive Officer Neil Slater. With a background in law and fund management covering a variety of asset classes, Slater has been asked to build the new entity pretty much from scratch. It is an opportunity that he has relished.

“Japan is at a really exciting crossroads right now”, he said. “It is a privileged time to be here”.

Sum of its parts
At the time Slater sat down to speak with BCCJ ACUMEN, news had recently emerged regarding the proposed merger of Standard Life and Aberdeen Asset Management PLC. Approval has since been given by shareholders and regulators, allowing the merger to go through in mid-August.

The hope is that this will extend to Japan.

“We are both relatively small businesses here. By working together as a team and leveraging those investment combinations, local expertise and our global platform, you have the potential to create something really special. I am really excited about the joint team we could have in Japan”, said Slater. “It will create more solutions and options for clients at a time when the industry is evolving in Japan. The FSA is encouraging foreign asset managers to be here and many Japanese institutions continue to diversify their asset allocation [abroad] … the proposed combined business will allow us to really work closer, I think, with those companies”.

The looming merger caps off what has been a “manic” 20 months for Slater, given his task establishing Standard Life’s presence and office in Japan. That has involved taking steps to understand the local industry and develop relationships, as well as the crafting of a five-year strategy. Slater has also overseen a rapid increase in staff.

“We’ve gone from three people to 12 in the space of 20 months. That doesn’t sound like a lot, but a fourfold increase is a heck of a lot when you’re building a team from scratch, you’re moving office, you’re getting regulatory licences, you’re dealing with the FSA and you’re trying to listen to clients—there is a lot to do there”.

Preceding the establishment of Standard Life’s Japan office was the firm’s relationship with Sumitomo Mitsui Trust Bank, Limited, which dates back to 2010. That alliance was reaffirmed in June of last year when the two firms signed a new memorandum of understanding in London; they have swapped both equities and staff as part of a secondment programme.

“I think what it has brought for both entities is an understanding of each other’s cultures”, said Slater. “[The secondees help] embed a cultural understanding and it has probably helped our organisation think longer term about Japan.

“It clearly has been helpful as part of our investment process, having an alliance with someone who has studied and managed Japanese equities for so long. I think we have also delivered a lot for them in terms of multi-asset capability”.

Political risk
Arguably adding to the workload was the UK’s Brexit vote just over a year ago, but Slater insists the impact for his firm shouldn’t be overstated.

“We are in the business of risk management, and we are in the business of investing across different assets and countries, so from an asset management perspective, it’s been less of an issue, certainly in terms of business”, he said. “We are headquartered in Edinburgh and we have a big operation in London, but we have operations in Ireland, Paris, Frankfurt, Luxembourg, Milan, etc. The biggest issue for our industry is the impact on passporting rights, and whether companies are able to service clients appropriately. Having a broad presence across Europe negates many of the passporting and servicing issues.

“From a Japan perspective, it doesn’t impact our business model in the slightest, it doesn’t impact how we service Japanese clients and we will continue to do that as normal”, he continued. “But obviously what I’ve been doing is listening to Japanese leaders—to their concerns and what they have been thinking about from an investment, political and operational risk perspective in light of the referendum”.

Nonetheless, the Brexit vote and the election of US President Donald Trump, along with jitters in the run up to recent European elections, has brought home the importance of factoring in political risk. Although asset management firms have been doing that for a number of years, for clients it has become even more important.

“If I have a large exposure, for example as an insurance company, to some of those jurisdictions, how can I think about protecting myself on the downside, both from a short-term and a long-term perspective? How do I think about asset allocation in the light of political risk and social change, in addition to economic parameters? What will be the impact of FX risk? What about the economic impact? There are many more conversations around that aspect than ever before”, said Slater. “I also think that means the industry has shifted … it’s become the norm to analyse and stress test political and social aspects as opposed to being a ‘nice to have’ ”.

Lessons to learn
Another important feature of Slater’s time in Japan has been the ongoing discussion around Japan’s corporate governance and stewardship codes. Although some are sceptical of the depth of these reforms, Slater says that Japan has made “great strides” in this area although, of course, progress remains to be made.

“These things happen as part of a journey, and what happens is you learn from these lessons—you pick yourself up and you say, ‘Ok what else can we do to make this even better?’ And from where I am sitting, we are very keen to get really involved in this to help and to make sure that Japan continues its wonderful journey”.

According to Slater, some of the main areas that need to be addressed now include continuing diversification of annual general meeting dates, transparency of voting, focus on the diversity and support for independent directors, and the opportunity for external director training. The independent audit process and how auditors are regarded and rewarded is another aspect to consider.

And the lessons the UK has learnt over the past few decades in corporate governance are now shaping Japan’s journey.

“Fundamentally, the corporate governance code and the stewardship code have many aspects from the UK’s approach”, said Slater, noting that there are, nevertheless, some nuances and differences.

Areas where Japan is learning from the UK and other jurisdictions include transparency of voting by asset owners, board committee structures, diversity and independent directors, in addition to being able to assess the success of the retail distribution review, which seeks to introduce more transparency and fairness in the investment industry. But for Slater, the lessons aren’t just one way. Indeed, Standard Life has conducted an insurance survey in Japan and the Asia–Pacific region, the results of which are about to be shared with clients globally.

“Part of the rationale for having an office here is that we can create a long-term business in Japan … but we can also learn a lot.

“Japan has just gone through 20 years of deflation. We have clients, pension fund and insurance clients who are going through a very difficult environment in terms of interest rates in Europe—they are interested in knowing how has Japan managed”.

A Day in the Life: Neil Slater

5:30–6am: Wake up, have Scottish porridge, fruit and strong coffee for breakfast
7am: Running, swimming or at the gym
8–11:30am: External meetings with Japanese financial institutions
12pm: Networking lunch with someone in the industry
1–4pm: Internal meetings
4pm: Calls with the UK
8:30pm: Try to get home for dinner
9:30pm: Management calls