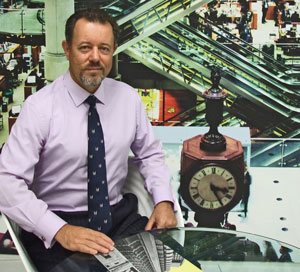 Iain Ferguson’s career in insurance has spanned Europe, the Middle East and Asia.

Although the Japan office of Lloyd’s, the world’s specialist insurance market, will be celebrating the 20th anniversary of its incorporation next year, Lloyd’s involvement in the country stretches back much further. The insurance market appointed its first agent to the country in 1868—the year of the Meiji Restoration—and since the turn of the 20th century has been providing Japanese insurers with reinsurance.

According to Iain Ferguson, president and chief operating officer of Lloyd’s Japan and member of the British Chamber of Commerce in Japan’s (BCCJ) Executive Committee (Excom), despite all the changes that have come to pass in the world and the industry since then, that history retains a lot of relevance.

“[Reinsurance is] still a very big and important part of our business today”, said Ferguson, who has 20 years of experience working in Japan. “The relationships that we have built over that time with the large Japanese insurers, and others that we protect, remain very strong and very important.

“And, indeed, in recent years we’ve seen the investment the other way, so the big Japanese insurers have actually invested in Lloyd’s and now run their own businesses in the Lloyd’s market, which makes them even more a part of the Lloyd’s family”.

But reinsurance is just one part of the story. Lloyd’s also offers firms trading in Japan coverage for a range of specialist risks, such as warranty and indemnity for mergers and acquisitions (M&A), as well as space and satellite insurance, renewable energy, political risks, trade credit and environmental liability.

“Our sweet spot and what we do in this Lloyd’s Japan office is the more specialist commercial end of the market”, explained Ferguson. “The kind of tough and advanced specialist coverage that a lot of underwriters find difficult to provide, that’s really where Lloyd’s is strong”.

But for Lloyd’s, there is still an ongoing process of education involved—many Japanese firms simply don’t realise that these more complex products are available.

“We do a lot of seminars and education in the market”, said Ferguson. “That’s one of the key activities for this office”.

Not standing still
Although Ferguson notes that the insurance industry emerged from the financial crisis relatively unscathed, change is still afoot in the industry, not least for Japanese firms.

With the three main Japanese non-life insurers—MS&AD Insurance Group, Tokio Marine and Sompo Japan Nipponkoa (SJNK)—now accounting for between 85–90% of the market, domestic insurance market consolidation has largely gone as far as it can. Now firms are having to look abroad for expansion, something that is part of a wider trend for Japanese businesses. And further evidence of this came in October with SJNK’s move to acquire US firm Endurance.

“For me the most interesting thing is that those three big groups, and Japanese corporates in general, have had a change in their mentality about business outside Japan”, said Ferguson.

“It’s no longer just [following] Japanese interests abroad—there is a proper international strategy now to be a true global business, which has been driven by the demographics in Japan. I think the penny has dropped—they understand that they can’t rely only on domestic revenue. If they do, they’re going to struggle to maintain their top line.

“I think all three leading insurance groups have made very substantial progress towards that goal”.

That said, insurers, and other firms, may still face a bumpy ride along the way.

“There’s a whole bunch of new risk management challenges that come with new territories, new workforces, new regulations in all of these host countries around the world”, said Ferguson.

Further change is fast approach-ing due to the UK’s decision to leave the EU. In particular, the loss of so-called “passporting” rights would have an impact on Lloyd’s European business, and Lloyd’s Chairman John Nelson has said that the firm may consider establishing some additional operations in Europe. But Ferguson cautions against overstating any risks.

“Lloyd’s values its historical trading rights across the EU and European Economic Area. We have decades of strong trading relationships with our European markets and we are taking the necessary steps to ensure that our European policyholders have continued access to Lloyd’s specialist insurance and reinsurance in the long term”, he said.

Other, more distant developments are also on the horizon. Climate change, self-driving cars and technological developments within the insurance industry itself are just some of the things that will have an impact, but Ferguson believes that Lloyd’s can keep pace with the changes.

“I think at the moment there is a desire to recreate that innovative and pioneering spirit among underwriters, and really challenge the thinking to come up with what are the new products that could be in play for the emerging risks of tomorrow”.

Real value
In addition to his work with Lloyd’s and the BCCJ, Ferguson also sits on the executive committee of the Foreign Non-Life Insurance Association of Japan and the board of the Japan-British Society. For the BCCJ, Ferguson leads Excom’s Membership Task Force, which focuses on how the BCCJ can provide value for different types of members and how the membership can be expanded. And for those who are part of the chamber, Ferguson is clear on the benefits.

“I do believe there’s real value for members in terms of networking and gathering market information from sources that they may not be able to access themselves”, he said. “There are already very strong links with the embassy and UK Trade & Investment, and we’re now working on making inroads into various [Japanese] government departments”.

A day in the Life: Iain Ferguson

7am: Up and running, take part in the school run
8am: In the office
Mornings: Catch up on email, distribute and delegate tasks
Noon: Business lunch, meetings, occasional visit to the gym
4pm: Second day begins, as calls and emails start to come from London
5–7pm: Video and telephone conference calls
8pm: Back at home, settle down the children, relax with a glass of wine in front of the television