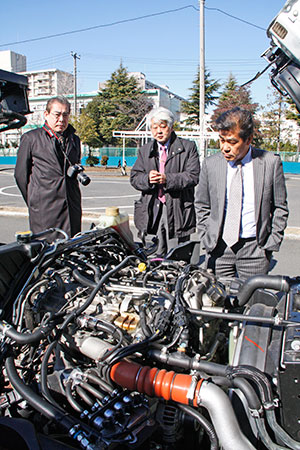 LPG and diesel are compressed in the combustion chamber to create energy.

An energy firm set up by a family with a proud tradition of looking overseas for best-practice opportunities for Japan has launched the first domestically developed light truck to be powered by a combination of liquefied petroleum gas (LPG) and diesel.

The innovative use of the two fuels together means the vehicle—the Hyper LPG Truck—is more economical and can be driven for longer distances without requiring refuelling, according to Daruma Energy Co., Ltd.

The business was set up in July 2013 by Yoji Furuta, whose wife is a direct descendant of Korekiyo Takahashi—himself something of an innovator.

Born in July 1854, Takahashi was adopted into a low-ranking samurai family but rose to serve as Japan’s 20th prime minister and was minister of finance for five terms. He also was the first agriculture minister, the first minister of commerce and industry and the seventh governor of the Bank of Japan.

Takahashi is perhaps most famous for the drastic financial policies he introduced at the height of the global Great Depression in the 1930s. Although painful, the reforms served to get Japan’s economy back on track five years ahead of the United States.

Committed throughout his life to building better ties with other countries, Takahashi studied English under Clarissa Hepburn, the wife of US medical missionary James Hepburn, whose surname was used to name one of Japan’s three main systems for transcribing Japanese, namely, the Hepburn romanisation system. He also worked at a British bank in Yokohama.

After a spell in the US, where he perfected his language skills, Takahashi set out on a career in government. He found time to teach English and translate foreign regulations that served as the basis for many of Japan’s laws.

Known affectionately as the Daruma Minister or Daruma Saisho—from where the firm takes its name—he was assassinated in 1936 at his home in Akasaka in an attempted coup d’état that has gone down in Japanese history as the 26 February Incident.

As Takahashi did, Daruma Energy wants to make a difference.

“There are roughly 60,000 logistics companies nationwide, about 90% of them small or medium-sized companies that operate less than 50 trucks”, said River Furuta, project manager for the LPG-diesel dual truck and Takahashi’s great-granddaughter.

“These companies spend between 17% and 38% of their yearly budgets on diesel fuel”, she said. “While petroleum prices are falling at the moment, they will not stay low”.

The majority of Japan’s logistics firms have been in the red for a number of years and had little hope of getting back into the black—until fuel prices fell recently. It is this sector that Daruma Energy particularly wants to assist.

LPG has developed a solid following in Japan, in part due to its low cost, its positive environmental performance, and the fact that it does not degrade over time.

An added bonus, which became apparent in the aftermath of the Great East Japan Earthquake and tsunami of March 2011, is that the strict laws on the storage of high-pressure gas at LPG filling stations meant that they withstood the destruction wrought on the Tohoku region.

Despite the clear advantages, Nissan Motor Co., Ltd. and Toyota Motor Corporation have announced plans to halt output of LPG-powered taxis within the next three years. This move will inevitably contract the autogas market.

To prevent the disappearance of LPG vehicles from Japan’s roads, the Daruma project—carried out by Daruma Energy in conjunction with Joto Garage K.K.—has received a grant from the Ministry of Economy, Trade and Industry to cover half of the ¥27.3mn cost of developing a vehicle that cuts fuel costs while offering improved performance.

Based on the Mitsubishi Fuso Canter—a line of light-duty commercial vehicles built by Mitsubishi Fuso Truck and Bus Corporation and fitted with the latest clean diesel engine—the vehicle has been adapted to incorporate an LPG tank. The two fuels are compressed in the combustion chamber to create the energy that powers the engine.

With diesel currently costing around ¥107 per litre and LPG around ¥70 per litre, replacing a portion of the diesel that the vehicle consumes with LPG cuts costs. By having two fuel tanks, the aggregate fuel load is increased and the driving range of the truck is extended.

The developers also quickly learned that mixing the fuels increased the engine torque dramatically, to a point at which the engine can be damaged, Furuta said. Engineers have therefore reduced the torque so that it matches the durability levels recommended by the manufacturer.

Yet another benefit, she pointed out, is that should the truck run out of LPG in its dual-fuel mode, the system can be manually switched back to the original diesel engine and continue to operate as a mono-fuel vehicle.

The truck meets all vehicle and emissions standards set by the Japanese government, while it is also seen as meeting the needs of firms’ business continuity plans for times of crisis. Conventional fuel was in desperately short supply in Tohoku after the March 2011 disasters, Furuta said, but LPG was still relatively easy to obtain.