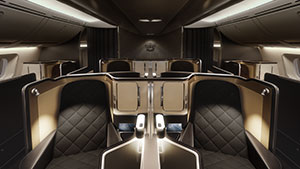 British Airways has been flying high in the Japanese market since 1948, but new partnerships, state-of-the-art aircraft, and award-winning facilities—in the air and on the ground—are taking the UK’s leading airline to new heights.

And, with increasing competition in the global industry, British Airways’ commitment to ensuring its passengers enjoy the best possible experience, from check-in to arrival, sets it apart from its rivals, according to Jonty Brunner, British Airways’ regional commercial manager for Japan and South Korea.

That promise extends across all the airline’s classes, but a long-haul journey in a British Airways first class or business class cabin is truly an occasion to savour.

“Our record of setting high standards in aviation for more than 90 years has continued with the award-winning Club World business class and the recent launch of a new first class product”, said Brunner.

“These new cabins bring together a balance of privacy, comfort, space and contemporary British design”, he added. “They draw on the airline’s heritage, focusing on quality and attention to detail, and the new first product will be available on the Tokyo Narita route from July 2016”.

Premium passengers are spoilt for choice with the selection of food and drink options on board, and in British Airways’ lounges around the world.

“We take special care and pay attention to ensure that the tastes, flavours and types of dishes work well in the air and at different times of the day or night, while we also customise our menus to suit the local tastes of our travellers”, he said.

For premium passengers departing from Heathrow Airport Terminal 5, as well as those arriving or transiting, the Elemis travel spa provides complimentary treatments. Meanwhile, for those energised by Champagne, it is served free of charge at the airline’s six lounges in the terminal, including The Concorde Room.

Priority boarding is a nice perk, while passengers travelling in Club World can enjoy a two-metre flat bed to stretch out on during the journey. Complimentary snacks are available in the Club Kitchen throughout the flight. 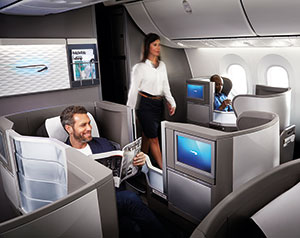 Customers will enjoy the light and airy cabins.

The very latest refinements in British Airways’ on-board product are being incorporated into the new Boeing 787-9 Dreamliner, which is to start flying between Heathrow and Narita International Airport in July. Featuring a new first class cabin—designed based on extensive feedback from frequent fliers—the new aircraft will have only eight first-class suites, compared to 14 on the majority of British Airways’ other long-haul aircraft, providing even more exclusivity and privacy.

“Our premium customers are used to the very best in life, be that at home, work or whilst on the move”, said Brunner. “They are accustomed to personalised service from our cabin crew and they maybe even expect a little British style as they travel with British Airways”.

The airline is constantly seeking ways to improve its reach, he added, pointing out that the partnership with Japan Airlines and Finnair provides customers in Japan with greater convenience and access to a wider network throughout Europe.

“We are able to offer our customers even more flexibility, enabling them to combine flights from all three oneworld carriers to create the perfect itinerary at the best price available”, said Brunner.

In 2015, oneworld was voted Best Airline Alliance by Business Traveller for the third consecutive year.

Passengers now have over 88 European destinations from which to choose, as well as 40 destinations at the Japan end of the journey.

Those numbers will receive a further boost in October 2016, when Iberia comes under the umbrella and commences direct flights between Narita and Madrid in Spain. Iberia, which will be resuming flights to Japan for the first time in 18 years, will provide the only direct links between the two cities.

From Madrid, Iberia’s network will give travellers easy access to its 29 Spanish destinations—from Barcelona to Granada—and other destinations in the rest of Europe, Africa and the Americas.

British Airways recently marked the fifth anniversary of its route linking Heathrow with Haneda airport. The airline was the first from Europe to fly to Haneda after it was opened to international operations. In April 2014, it increased the service to daily flights to meet demand. Daily flights also operate out of Narita.

Current services have come a long way from British Airways’ inaugural services to Japan. If the 11-hour flight between Tokyo and London seems a long time today—in spite of all the entertainment and dining options—spare a thought for passengers on the route when it was pioneered in 1948 by British Airways’ predecessor, British Overseas Airways Corporation.

At the time, passengers were required to travel 17,099km to Japan, via Alexandria in Egypt, Karachi in Pakistan, Bangkok in Thailand and Hong Kong. That journey took seven days.

The contrast with the new Dreamliner—the most advanced aircraft in the British Airways fleet—could not be starker.

“They are designed to boost well-being and offer the best possible customer experience for our inbound and outbound passengers alike”, said Brunner.

“Our customers will notice the benefits of the integrated LED mood lighting system; it reflects daylight and night-time brightness and helps customers adjust to different time-zones.

“Our customers will also notice that the new aircraft offers a smoother ride, with built-in sensors countering the effects of turbulence, reducing nausea for those who suffer from motion sickness”.

The innovation of lower cabin air pressure helps increase the amount of oxygen and moisture in the cabin air, reducing the effects of jet-lag and dry eyes for passengers, while fliers will also enjoy a better view from the larger windows.

“We look forward to welcoming our customers on board”, said Brunner.