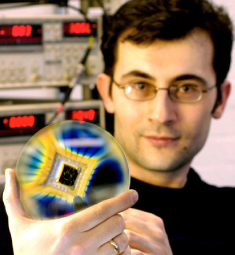 Scientists in the UK and Japan have discovered how to magnetise the wonder material graphene, opening up new opportunities for the world’s thinnest material in the area of spintronics, the London Press Service reported on 15 June.

The findings are part of a large international effort also involving research groups from the US, Russia and the Netherlands.

A team at the University of Manchester, led by Professor Andre Geim, a recipient of a 2010 Nobel Prize for his discovery of graphene, can now show that electric current—a flow of electrons—can magnetise graphene.

The results, reported in the influential Science magazine, could be a huge breakthrough in the field of spintronics—emerging technologies that exploit the intrinsic spin of the electron and its fundamental electric charge that is exploited in microelectronics.