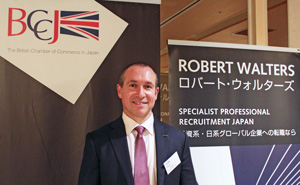 Hardly a day goes by without it being said that millennials—the cohort born between 1980 and the mid-1990s—are changing the world in some way. Variously defined as entitled, pampered, upbeat, open-minded and tech-savvy, this is the demographic every marketer wants to reach. And since millennials represent an expanding section of the workforce, they are increasingly attracting the attention of managers, too.

On 31 May at the ANA InterContinental Tokyo, David Swan, managing director at Robert Walters Japan K.K., spoke to British Chamber of Commerce in Japan members about the issues surrounding millennials. Based on Robert Walters’ research, Swan revealed some of the characteristics of these individuals and suggested approaches that firms might wish to take.

“If you are a baby boomer or generation X-er who has moved into a management role, you probably have some very strong opinions about the importance of earning your stripes through commitment and hard work, respect for authority and seniority”, he said. “If so, it is time for you to open yourself up to some new perspectives”.

In addition to setting out an eight-point plan for managing millennials (see box), Swan detailed some of the initiatives that his firm has taken. These include a global charity day, when employees can wear casual clothes and engage in fun activities to raise money for a good cause and an extra day of paid leave to volunteer.

Swan said he operates what he calls a reverse mentor group, through which he meets millennial employees and they give him feedback on the firm’s work and direction.

“I found that really helpful, because you findout what sort of conversations they’re having, and a lot of times it’s because they don’t have enough information”, he said. “If you can spend the time to explain to them why you need to do it like this and think through the process, very often you can have an impact on their views”.

Make the change
After his talk, Swan sat down with BCCJ ACUMEN to discuss further issues regarding the handling of millennials in the workplace. In particular, he addressed how much attention firms should give the issue.

“That depends on what proportion of millennials make up your workforce and whether you want to increase that proportion or not. It depends on how successfully you already are at bringing in millennials; for certain businesses it might be somewhat easier”, Swan commented, citing Facebook as an example of a firm for whom it might come more naturally.

Not all of the changes should be embraced, however. In recent years, firms have introduced everything from casual dress codes to slides—as found in playgrounds—in a bid to lure millennials, but Swan isn’t convinced all these initiatives are worthwhile.

“When you have bean bags in the office and meditation rooms and free massages and things like that, the contribution that makes to the bottom line is probably a bit tenuous”, said Swan.

For all the advice he gave to firms, what would Swan say to millennials themselves?

“Go with the idea that you’re going to invest three to four years in the job and don’t think about what you’re going to get straight away—work to learn, not to earn”, he said. “There’s going to be some boring, menial stuff that you might have to do to start with, but really that’s actually quite important and it’s worthwhile pushing through that to get to more interesting and meaningful stuff”.