A soldier’s photo album, showing in close-ups the devastating aftermath of the World War II nuclear bombing of Hiroshima, has emerged after 66 years, the Daily Mail reported on 5 January.

Sapper Ronald Taylor was posted to Japan just weeks after the country surrendered following the dropping of an A-bomb on Hiroshima then Nagasaki.

Taylor took snaps of his surroundings, but never showed the haunting album to his family when he returned home.

After his death, his grandson found the album on top of a wardrobe.

Scotch will be hit by a British Foreign & Commonwealth Office ban should Scotland break from the UK, the Daily Mail reported on 22 January.

“Affordable luxury” fashion brand Ted Baker—set to open its first Japan store in March—is banking on Asian and US expansion to compensate for what it projects to be more modest growth in the UK during 2012, the Financial Times reported on 12 January.

The retailer, famed for its flamboyantly lined suits, is also planning to open its first store in China in June, and a flagship US store in New York in the middle of the year. It said overseas sales account for about 30% of its total sales. 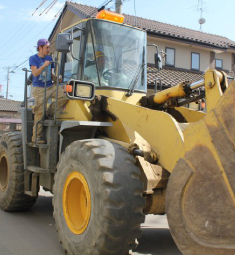 Moving sludge to the dump.

Jamie El Banna has described how he set up a relief centre following the devastating earthquake and tsunami last March, the BBC reported on 1 January. London-born Banna, 26, who moved to Japan in 2008, is founder of It’s Not Just Mud, a volunteer NPO in Tohoku.

The Royal Bank of Scotland (RBS) has agreed to sell its Dublin-based aircraft leasing division to Sumitomo Mitsui Banking Corp for ¥550bn (£4.7bn), the Nikkei reported on 17 January. Set up in 2001, RBS Aviation Capital is the fourth-largest aircraft lessor in the world, according to RBS, with a fleet of 206 jets leased to 65 airlines in 24 countries.

The Tsunami and the Cherry Blossom, directed by Lucy Walker, has been nominated along with four other films for the 84th Academy Awards’ Documentary Short Subject category, the Mainichi Shimbun reported on 25 January.

Cooperating with a non-profit organisation, the Londoner is planning showings at high schools and at the Washington, DC cherry blossom festival. The awards will be announced on 26 February.

Police conducted a dramatic dawn raid on the home of troubled 1980s pop icon Adam Ant to arrest a Japanese friend over visa offences, the Daily Mirror reported on 17 January.

The woman is suspected of having overstayed her visa and faces deportation. A neighbour commented that: “People are in and out of that house all day, every day. God knows who they all are. There’s all sorts who visit. It’s a constant stream of visitors”.

Adam Ant’s lawyer said: “This lady is one of Adam’s friends. She had attempted to lodge the correct applications to extend her visa, but the authorities had been dealing with the wrong address”.

Ryoichi Maeda will stay with Jubilo Iwata after failing to agree on terms with West Ham United, the Mainichi Shimbun reported on 16 January. Former J-League Golden Boot winner Maeda, 30, had been in London on trial with the promotion-chasing second-tier team, but the two sides have failed to reach an agreement.

Leicester City and Yuki Abe have cancelled the 30-year-old midfielder’s contract, the Mainichi Shimbun reported on 24 January. “After 17 months at King Power Stadium, Yuki has expressed a desire to return to Japan to be closer to his family”, Leicester City said. Abe is likely to return to his former J-League club, Urawa Reds, according to sources.

Striker Tadanari Lee said his move to Southampton from Sanfrecce Hiroshima was a major gamble, but he is determined to force his way into the side and help the Saints win promotion to the English Premier League, the Mainichi Shimbun reported on 17 January.

“I am putting everything I have accumulated throughout my career on the line. I want to get among the goals”, 26-year-old Lee told a news conference in Hiroshima. “The Premier League is the best league in the world. I want to get there and that’s why I joined Southampton”, he said.