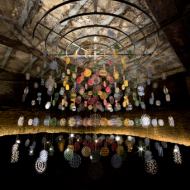 The Super-Kamiokande neutrino observatory in Gifu Prefecture has inspired an art installation on particle physics in a historic London ice well, the BBC reported on 23 August.

The Superposition exhibition is the result of a collaboration between artist Lyndall Phelps and physicist Dr Ben Still.

Phelps was fascinated by subterranean spaces such as Super-Kamiokande, which is built under Mount Kamioka.

At the observatory, light is used to detect particles. Glass domes inside are hand-blown by men living near the mountain who are not allowed to smoke or drink to ensure their breath is free of toxins.

Brick-lined ice wells were built in the 19th century below the London Canal Museum, before the invention of artificial refrigeration.