As part of our ongoing series marking the 70th anniversary of the British Chamber of Commerce in Japan (BCCJ). BCCJ ACUMEN sat down with Henderson to discuss her seven-and-a-half years in the job, her memories from leading the organisation throughout that time, and what the future holds for the BCCJ.

Shortly after starting work on 1 February, 2011, Henderson told BCCJ ACUMEN readers, “I feel privileged to be serving you, our members, and I am very much looking forward to exploring new and exciting territory with you during 2011 and beyond”.

Indeed, she has been breaking new ground for the chamber and its members ever since, while welcoming new firms to an organisation with a long history and heritage.

Henderson came from a back­ground in media and communications and online education, having been in Japan since 2003. “I was asked by the then-president Philip T Gibb OBE if I would be interested in being interviewed for the post. At that time the late Ian de Stains OBE was the executive director of the chamber. He had been in the posi­tion for about 25 years, and was having to pull back a little for health reasons”.

Concerning de Stains’ initial influence on her work she went on to say, “It was really an honour, if a little bit intimidating, to take the reigns from someone who had been in the job for so long and had developed a real footprint for the chamber and its members in the UK and Japan. Ian told me ‘you’ll find your own way’. He became, very quickly, a trusted mentor and friend”.

Changing industries and joining the chamber presented both challenges and opportunities. “The Executive Committee had given me a very clear remit, which was to rebrand, repackage and enliven the entire organisation. So I knew coming in exactly what it was I had to do. I had to disrupt! While I was inheriting a really successful and influential organisation, I was aware it was suffering from some communication challenges and wasn’t quite getting its message out in the way that it should or deserved”.

She recalled her first months in the job. “It was a steep learning curve. You can imagine—there was almost 60 years of history to get my head around and, at that time, about 180 member firms to meet and get to know”.

One of the major events that Japan and the BCCJ faced, six weeks after Henderson took up the position, was the Great East Japan Earthquake and tsunami on 11 March, 2011.

In the aftermath of the disaster, Henderson and the BCCJ Operations Manager, Sanae Samata, focused on keeping open communications with members and the wider ecosystem. “Phone lines had gone down, so social media feeds became a life-line. Luckily we had set up a Facebook page just two weeks prior to the disasters.

“So now, we were posting, among other things, information from the UK’s chief scientific advisor, Sir John Beddington, to help us make sense of the nuclear situation that was developing in Fukushima. At the same time we could engage with companies like GSK and Unilever to ship products and people—volunteers—into the affected region. Meanwhile in Tokyo, we wanted to operate on the basis of business as usual”. 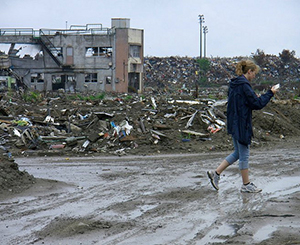 A team from the BCCJ soon travelled to stricken parts of the Tohoku region to help with relief efforts and, later, based on feedback from local commu­nities, set up the Back to Business programme to help SMEs get back up and running. It is for this work she received an MBE in 2013—which she was quick to point out was a medal for everyone who contributed to the B2B initiative.

Seven and a half years on, Henderson reports that life at the BCCJ is never dull nor quiet. “Every day is different, because what members need on any particular day is different.”

The chamber produces more than 40 business exchange and networking events and activities per year, and I ask her which of these have been the most memorable.

“Is it too early to mention David Beckham?” she jokes. “That was honestly a …  real career highlight for me, just before taking maternity leave; we had the opportunity to host one of the world’s sporting greats at a very small, closed venue in Tokyo, inviting students and parents from the British School in Tokyo, a long-standing BCCJ member organisation, to connect with a youth team from Kumamoto who’d managed to achieve great results despite the earthquake in 2016.

Away from sporting legends, it is the BCCJ’s flagship annual gala event which holds a special place for Henderson. “The British Business Awards has become a genuinely impactful showcase for UK–Japan business relations, bringing together 400 people to celebrate and connect under one roof”.

“In the 11th year of this ceremony, over 100 companies now donate their time, energy, services, goods to make the magic happen for our community. Behind the scenes, a diverse line up of judges from business, academia, media and government are judging in a fully transparent and insightful way (page 24). It’s really quite a special project — if a lot of work for our team!” she added. 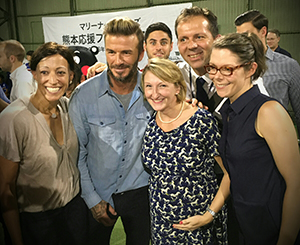 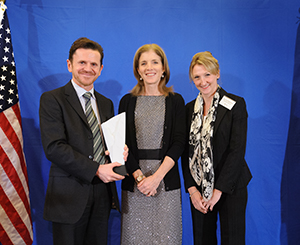 Meeting people such as former US Ambassador to Japan Caroline Kennedy is part of the job.

Aside from events, Henderson is keen to stress the BCCJ’s daily, ongoing commitment to diversity and inclusion, and the chamber’s D&I programme, launched in 2012 initially as a response to the very male-dominated business landscape in Tokyo.

“Very early on though, we realised the value of diversity as an innovation driver. Therefore we decided not to have a gender diversity focus, or establish a women’s group. For me, this has never been about ‘women in business’. Observing macro global trends, we genuinely wanted to shine a spotlight on the development of diverse groups in the workplace in Japan, the LGBT community, people with disabilities, Gen Y and, of course, women as well”.

She smiles when she recalls her initial inter­view with Excom: “I recall telling them that they were viewed as a bunch of stuffy old white men in suits. I’m sure they didn’t quite know what they were getting into!”

As for diversity and inclusion in 2018, “We want the chamber to represent—and genuinely be a diverse and vibrant base for—doing business, because I think that’s something that Japan and other countries, including the UK, are lacking”, she adds.

So what does the future hold for the BCCJ? What challenges and projects does the chamber face?

Henderson said the main challenge is operating sustainably: “Managing our ambition around macro-economic topics and the global sporting events coming to Japan in 2019 and 2020 with our limited human resources. Honestly speaking, that’s the biggest challenge we have. We want to do more and more each day to help connect members with exciting opportunities”.

Looking to the future, Henderson said the chamber’s 5.0 Project is set to make an impact. To be launched in early 2019, the project name refers to the fifth stage of human evolution, and the scheme will see the chamber embracing a world of work where humans and robotics, artificial intelligence and digitisation live in harmony.

“The three pillars of our 5.0 programme are diversity and inclusion, digitisation and socially responsible business”, Henderson explained. “Those main drivers uphold the 5.0 Project, which has a bigger mission: to connect our members and member firms to ‘a future of innovation and inclusion’.

“Once again, we’re looking to diversify what the BCCJ is and how it can partner with Japan and its businesses in order to create a more innovative environment for all.

Henderson said she had two hopes for the BCCJ. Firstly “I’d be delighted if the BCCJ could play a part in shaping Japan–UK free trade agreement negotiations and help define the narrative of what comes post-Brexit”, she said. Secondly, “I’d like to see some tangible societal change being effected by the chamber and our international chamber partners in the area of workstyle innovation, work­force reform, and wellness. Surely there is an upside to us all being happier at work?”

And given how information is nowadays so freely available and networking can be done online, I ask Henderson whether she thinks the chamber will still be relevant in the future. She’s determined. 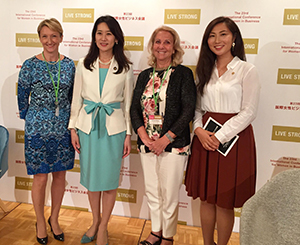 In 2018 Henderson attended the International Conference for Women in Business as a moderator.

“Absolutely. I believe that in many ways the chamber becomes even more relevant as digital technologies move apace, because member companies and the people who work there … want to feel like they’re part of something real, something bigger, and something that has a real purpose.