Dogfight over performance, participation and price 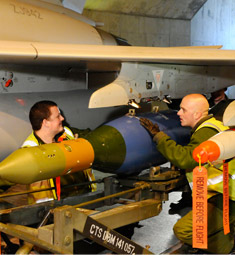 The opposition may have impressive pedigrees, but they are up against a thoroughbred in the shape of the Eurofighter Typhoon as the race to provide the Japan Air Self-Defense Force with its next-generation fighter enters the final stretch.

No fewer than seven aircraft were believed to be in the early running to provide Tokyo with a replacement for its ageing F-4 Phantoms, but the choice has been whittled down to three: the Lockheed-Martin F-35, the Boeing F/A18 Super Hornet and the Typhoon.

The Japanese government issued a Request for Proposal to the potential bidders on 13 April and the firms have until 26 September to deliver comprehensive packages on why their aircraft is most suitable for Japan’s needs. The government is scheduled to announce its final decision before the end of the year. And Eurofighter, the four-nation consortium behind the Typhoon, is confident that its product meets—and even exceeds—Tokyo’s specifications.

“We would say that the Typhoon is the most capable air-defence fighter available today in the export world”, Andy Latham, vice-president of Typhoon Exports at BAE Systems Ltd, told ACUMEN. “And the recent media coverage of its contribution to the ongoing operations in Libya has certainly raised people’s awareness of its capabilities in combat”, explained Latham, who is based at the firm’s offices in Warton, Lancashire.
The Typhoon pilots are reportedly delighted to be doing what they have been trained to do with an aircraft that is doing everything that it has been designed to do.

The genesis of the Typhoon dates back to 1971, when the Ministry of Defence (MoD) in London identified the need for a new fighter that would be capable of defending British airspace during the Cold War. West Germany had reached a similar conclusion before the end of the decade, so British Aerospace teamed up with Messerschmitt-Bölkow-Blohm (MBB) on a proposal for the European Collaborative Fighter.

In late 1979, French aircraft manufacturer Dassault joined the project, which was first tagged the Eurofighter. However, differences of opinion among the partners—primarily concerning the roles the aircraft would be required to fulfil when in service—saw each go their separate way in 1981, after which BAE and MBB teamed up with Italy’s Aeritalia on a design that incorporated many of the features of today’s Typhoon, including the delta wing and the canards alongside the cockpit.

In May 1983, BAE and the MoD signed a contract for the development of a demonstration aircraft—the Experimental Aircraft Programme—and, just over two years later, Britain, West Germany and Italy decided to go ahead with what widely had become known as the Eurofighter.

In 1985, Spain rejoined the project, while France opted to go it alone with its Dassault Rafale aircraft. 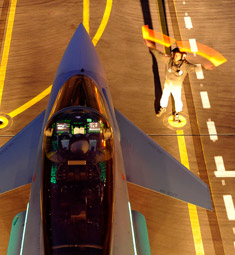 Eurofighter Jagdflugzeug GmbH was established in Munich in 1986 to manage the project, with British firms taking on 37.5% of the aircraft’s construction, Germany 30%, Italy 19.5%, and the remaining 13% coming from Spain.

BAE Systems is producing the front section of the fuselage, the canopy, dorsal spine, tail fin, inboard flaperons and the rear section of the fuselage; Rolls-Royce is the primary provider of the power-plant; and Alenia Aeronautica together with Cassidian (EADS Deutschland and EADS CASA) are managing the supply of the remaining components. Each aircraft costs an estimated $100 million.

The Eurofighter prototype took its maiden flight on 27 March 1994 over southern Germany, and in January 1998 the first production contracts were signed for 232 of the jets for the Royal Air Force, 180 for Germany, 121 for Italy and 87 for Spain. A naming ceremony for the aircraft was held at Farnborough, Hampshire in September 1998.

The Typhoon is already in service with the air forces of the four countries that collaborated on its construction, and it has been sold to Austria and Saudi Arabia. The governments of India, Greece, Qatar, Oman, South Korea, Denmark, Switzerland, Turkey, Romania, Malaysia and Bulgaria are all reportedly considering acquiring the aircraft. As is Japan.

The Eurofighter, in its infancy, was designed to operate from airfields in Britain and to protect UK airspace from incursions, then considered most likely to come from across the North Sea. The enemy at the time was far superior in terms of the number of aircraft it was able to put in the air, so the aim was to have an interceptor that was technologically superior and, therefore, able to make up that shortfall.

Thirty years later and in a different geopolitical world, Japan finds itself in a very similar position.

“Japan’s threats will now come over the water and in the form of fairly good, competent aircraft, but not technologically better”, said Chris Dickenson, first secretary with responsibility for advanced engineering, defence and security at the British Embassy Tokyo. “With the Eurofighter, Japan will be able to counter that threat”. 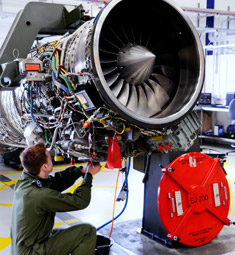 The team putting together the proposal to submit to the Japanese government has identified three main reasons that the Typhoon is superior to the aircraft being proposed by the other bidders, and identified them as the three Ps, namely, performance, participation and price.

“Japan wants an air-defence fighter and that is exactly what the Eurofighter is—a high-performance aircraft”, said Dickenson.

The competitors’ products do not fit as neatly with Japan’s needs. The F-18 is primarily designed to operate from aircraft carriers, which Japan does not have; the F-35 has impressive stealth characteristics, but has sacrificed size and payload by having all ordnance stored in the aircraft.

As a result of its design, the F-35 can only carry four missiles, while the Typhoon has 13 external points that can carry a combination of missiles, bombs, external fuel tanks to extend its range, and a laser bomb designator unit. Moreover, the US aircraft is also still in the development phase and is not scheduled to enter service for several years.

“Companies have been required to design aircraft that can do more than one job, meaning they are a compromise for all those tasks”, said Dickenson. “The F-35, for example, is not as good as it could have been on the basis that it does a lot of things instead of being a thoroughbred.
“This means that specialist aircraft may be harder to sell, but the Eurofighter is exactly what Japan is looking for”.

The product also has a track record in terms of participation, with the 72 aircraft sold to Saudi Arabia including a significant industrial dimension that looks at everything from final assembly to support through the lifetime of the aircraft.

“This builds the relationship and means the customer is more tied to the product going forward”, said Dickenson. “The US tends to hold its technology very closely, but we are much more trusting and happy to release more and share more with the Japanese.

“If this goes ahead, these aircraft can be built in Japan under commercial licensing agreements and firms here have already expressed an interest in that”.

The aircraft structure would probably be built by Mitsubishi Heavy Industries Ltd., the corporation in Japan with the most experience in constructing fast jet aircraft; the engines by IHI Corp., the specialist here in high-performance engines; and the radar and avionics probably by Mitsubishi Electric Corp. 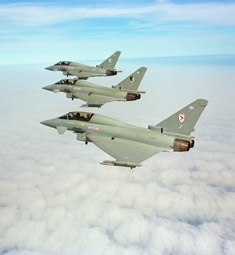 “Rolls-Royce aims to extend its 40-year relationship with IHI by licensing the Typhoon’s EJ200 engine, following the same philosophy of sharing advanced technologies, as well as encouraging industrial participation and mutual partnership, an approach that has also placed us in growing partnerships with Kawasaki Heavy Industries and Mitsubishi Heavy Industries”, said Rolls-Royce Japan President Richard Thornley, who is also a BCCJ executive committee  member.

“Rolls-Royce is proud to be the biggest supplier of gas turbines to the Japan Ministry of Defense today, many of which powered the Self-Defense Forces’ Tohoku disaster relief”.

“We are looking to build a partnership and virtually everything in the aircraft can be brought over here, which is a major selling point”, said Dickenson. “But it will also sustain jobs in the UK as there will be ongoing development work”.

Future improvements being considered include an aircraft carrier-capable version, in which the Indian armed forces are particularly interested, as well as the MBDA Meteor long range, air-to-air missile and the development of engines fitted with a thrust vectoring nozzle to increase manoeuvrability.

While the aircraft is not the cheapest available, it is the most capable in terms of return on investment, and the technology has been proven, most recently in Libya. Meanwhile, there is some uncertainty regarding when the F-35 will enter service and how much it will cost.

One area of concern is Japan’s long-standing military relationship with the US and the influence that may have on the final decision. But BAE System’s Latham says that may not be the key factor.

“The way we see it is that, while the alliance with the US is the cornerstone of Japan’s defence—and we acknowledge that—a decision to buy the Typhoon does not weaken that alliance and could, in fact, strengthen it”, he said.

“By having the best capabilities, Japan would be able to make a stronger contribution to the alliance”, he said, adding that there are also no concerns over the issue of inter-operability of equipment and systems, as British forces have operated in concert with their US counterparts on numerous occasions without a hitch.

“Previously, we have not had a candidate for Japanese defence programmes, but this time we have a very credible and very capable candidate”, Latham said.