Now in its 43rd year, the United Nations’ International Women’s Day (IWD) highlights the conversation around global gender parity, particularly the increasing pace of change in this area.

However, there is still a lot to do, both in the UK and Japan. According to the World Economic Forum’s Global Gender Gap Report 2017, of 144 countries surveyed, the UK ranks 15th—and Japan 114th.

On 8 March, in celebration of the IWD, the British Chamber of Commerce in Japan (BCCJ) and the British Embassy Tokyo hosted a panel discussion to continue the dialogue and reveal the thoughts and advice of senior executives at large multinational firms. 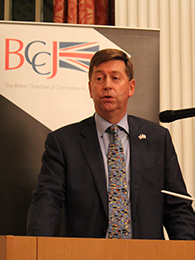 “There are many ways that we can help share our experience and contribute to Japan’s initiatives to improve gender equality”, Madden said. “British businesses in Japan are taking a leading role in promoting diversity and equality in the workplace”.

Parity
In Japan, one of the key benefits to working towards gender parity is finding solutions to its ageing and declining population. Bearing this in mind, Dearlove asked the panel what their firms are doing to support their workforce in achieving gender equality.

Hill outlined some of the efforts being made at IBM, including remote working, flexible working, maternity benefits and childcare. “Over the past six years more than 40% of our graduate intake in Japan has been female”, she said.

Business culture and structure in Japan can be barriers to achieving workplace parity. Hill revealed that since 2008 IBM Japan has reported directly to headquarters, making it easier to implement global policies. “This gives you the ability to make sure that you are looking for parity and best practices more easily”, she said.

At Barclays, Huf noted that internal mentoring, partnering with organisations and implementing policies around maternity and child adoption are ways that firms can help. As of September last year, the firm introduced non-primary caregiver leave. “Policies don’t work unless you make them work in practice and people actually adopt them”, she added. 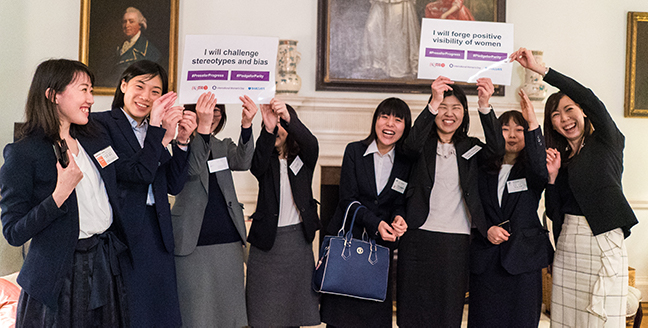 Guests made their pledges for parity.

Quotas
One topic that is under scrutiny in the diversity dialogue is the need for quotas. Dearlove asked panellists how appropriate or necessary quotas are to balance the gender gap.

“I think there can be a role for quotas in affecting rapid change and achieving the sort of critical mass that is needed to produce sustainable change”, King said. She named France, Germany and the Netherlands as countries that have adopted quotas for women on company boards with some success.

“But I think there are real drawbacks, ques­tions of tokenism, the risk that women or other minority groups … [may find] that their role is devalued through the use of a quota”, she added. On balance, she believes that targets—rather than quotas—backed up by real policy are vital.

As an example, she mentioned the UK’s recent review of the composition of FTSE100 boards and how the approach to changing the situation has involved using targets, not quotas.

“The sorts of policies that have backed that up have included the publication of the composition of boards and also an active role of pressure groups”, she said. There is now more than 25% representation of women on FTSE100 boards in the UK.

Okumura emphasised the importance of looking at data, too. “I think targets encourage people to be more aware of where we are and where we want to be”, she said. “I don’t have a strong opinion about quotas, but at least looking at the data and understanding it and setting a little target to encourage others is really effective”.

Guarneri added that more important than quotas is providing an infrastructure and ecosystem that will allow women to have equal opportunities. He mentioned a corporate kindergarten and various financial incentives.

“Quotas, I think, are just a way to prove that a system is inefficient”, he advised.

Huf, on the other hand, believes there are scenarios where quotas are the best option.

“Where I think they are necessary is where targets are not working, and I think it’s in situations where [targets are] not merit-based, or there may be unconscious biases that need to be addressed when people are actually selecting balance”, she said.

Modelling
Role models are another important factor in driving change. However, Hill emphasised that these role models must be the right ones, and they must be relatable.

King relayed her experience while working at Her Majesty’s Treasury. She recalled that the second-most senior civil servant was a woman.

“What was really important was not just the fact that she was a woman, but that she did the job differently, she was in charge of public spending and she was much more consultative than had traditionally been the case in the finance ministry”, she said.

By adopting a different attitude, King felt she set an example to male and female staff. “I really believe it has led to better policymaking and to a better environment within government”, she added.

Huf noted that having role models is particularly important for firms trying to attract potential staff. She notes that graduates are interested in seeing people who they can relate to in real positions. “It’s not the gender, it’s actually what people do, it’s their values”, she explained.

While the UK may be steps ahead of Japan in this space, King believes there is still room for the UK to learn from Japan, particularly from some local initiatives, such as Mayor of Yokohama Fumiko Hayashi’s policies to increase local childcare provision. And in Japan there is also much to learn; Okumura specifically highlighted the role of government.

“I’m impressed that the UK government is supporting parents coming back to work after a certain amount of leave”, she said. “I think right now in Japan we are depending too much on corporations and firms on that particular part—so each firm has its maternity leave system and programmes for those coming back to work, but it’s really nice that the government is supporting that in the UK”. 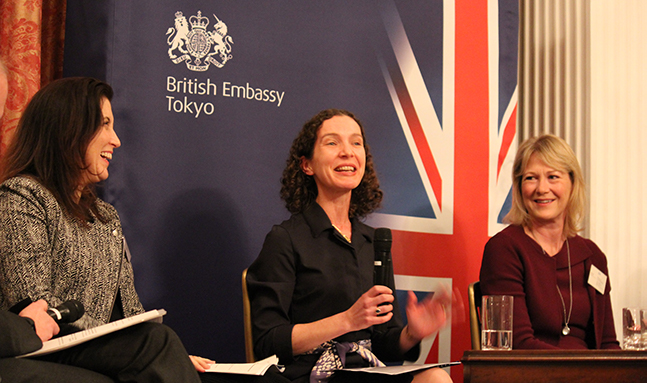