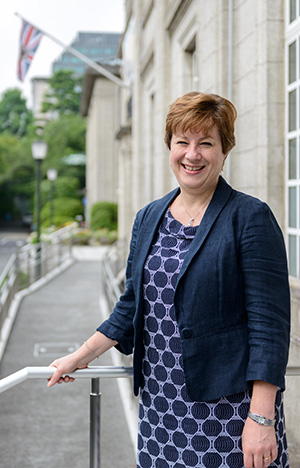 I’ll be leaving Japan in August, after five years heading up the UK Trade & Investment team (UKTI) at the British Embassy Tokyo and the British Consulate-General Osaka. As I sort through the unconscionable piles of “stuff” that seem to have accumulated, write handover notes for my successor and battle with Korean in preparation for my next job, I’m really grateful to BCCJ ACUMEN for forcing me to stop and reflect a little. What has changed in Japan over the past five years? And what has that meant for British business?

At first glance, it feels as though I’m leaving Japan much as I found it: the same frenetic yet orderly lifestyle, the same blend of early-adopter trends with anachronistic throwbacks (claims to the contrary by fax only please), and the same beautiful countryside defying efforts to concrete it over.

The same goes for my team and for the embassy. We are still at our enviable green oasis of a compound, still topping the global UKTI league tables for customer satisfaction, still bringing in Japanese investments and still trying to convince the sceptical Japanese public that British food really is delicious, and that, yes, we do manufacture things.

But digging a little deeper into my memory bank, I realise that actually quite a bit has changed.

Let’s start with the underground. Back in 2010, the minimum fare was ¥160—exactly as it had been when I was last in Tokyo 15 years ago. My travel claim forms practically auto-filled themselves. Now it’s ¥165—still amazing value, but a very visible indication, alongside the rise in the consumption tax rate, of the impact of Abenomics.

On the streets of Tokyo another change is immediately apparent: the foreign tourists thronging the once quiet backstreets of Yanaka and competing to find the item in Tokyu Hands that is most likely to convey the sheer otherness of Japan to friends back home.

Spurred on by relaxation of visa rules and the weakening of the yen, over a short space of time, Tokyo has lost some of its comfortable but slightly unnerving homogeneity and started to feel like a diverse, global city. Now we just need to fix Internet and phone access. Then the world is going to feel at home when it descends on Tokyo for the Olympic and Paralympic Games in 2020.

One of UKTI’s biggest preoccupations is ensuring that British firms secure a good slice of the business generated by those Tokyo 2020 preparations. A new section in my team, as well as a new and productive relationship with the British Chamber of Commerce in Japan—since we work together on this—are tangible evidence of another very welcome change.

Bringing many Tokyo 2020 visitors to Japan will be JAL’s new fleet of Airbus A350s, with wings built in Flintshire, Wales, and Rolls Royce engines built in Derby, England. Japan is still the only country bar Israel whose airlines are predominantly Boeing aficionados. But the decision by JAL in 2013 to buy European products is a small indication of Japanese firms’ increasing readiness to jettison long-held traditions if it makes business sense.

A similar move away from the US as default partner is apparent in the current exchanges on defence equipment collaboration. Five years ago, who would have thought that Japan would host its own defence trade show and be promoting defence exports? It may be contributing to more complex relationships with its neighbours, but greater Japanese confidence on the world stage is surely a positive thing for UK interests and the wider global community.

The most significant event of the past five years of course is the triple disaster of March 2011. That has had a profound impact on Japan, from the subtle shift in the way that the Imperial Family engages with its subjects to the dramatic turnabout in energy policy, and a consumer trend towards sustainability. It has affected the work of my UKTI team, too. There are new opportunities to support Japan as she grapples with nuclear clear-up and decommissioning, a slew of investments by UK firms in the energy sector, and a pitch to consumers that emphasises value—and values.

If there was a real silver lining in the triple disaster for the UK, though, it lies in the respect we at the embassy earned for our solidarity in staying open for business and sharing the reassurances of our scientists, cutting through some of the confusion with hard facts and open communication.

We can never take our position as Japan’s best friend in Europe for granted. But, when I see the burgeoning business relationships between our countries, the trust that companies like Hitachi, Ltd., Toshiba Corporation and Nissan Motor Company Ltd. continue to place in the UK as a business hub, and the eagerness of new British Ministers to put Japan high on their list of places to visit, it gives me confidence that our relationship is in a good place and that British firms will continue to benefit from that.

I’ll continue to watch Japan’s development from my vantage point across the Sea of Japan (or the Eastern Sea, as I must now learn to call it). If any of you want to develop your business in South Korea, do get in touch. Otherwise, thank you for all your support and friendship over the past five years, and I look forward to seeing the BCCJ go from strength to strength.