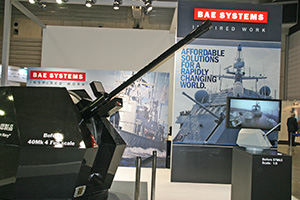 Acknowledged as some of the best in the world in the field of defence and security equipment, British firms displayed their hardware, technology and knowhow at Japan’s first conference and exhibition devoted to the defence sector.

The three-day MAST Asia 2015 event opened on 13 May at Pacifico Yokohama, just over a year after the Japanese government instructed its own defence sector that they would, in the future and subject to export licence approval, be permitted to sell their products and services overseas. Meanwhile, foreign firms would be granted greater access to Japan, including in the shape of alliances with major local manufacturers.

The dropping of objections to the long-held limitations on the defence sector is controversial at home and abroad, but reflects Tokyo’s concern about the instability that is increasingly becoming apparent in the Asia–Pacific region, as well as the industry’s potential to become a new source of international trade.

For the UK, it also means opportunities in everything from advanced communications equipment to state-of-the-art landing craft, mine and missile countermeasures, unmanned submersibles, marine engines, and aircraft and their components.

“The UK’s defence and security industry remain at the forefront of research, design, manufacture and support”, said Brigadier Richard Spencer OBE, who attended the show.

“It’s an exciting time to be involved in the defence industry relationship with Japan”, he added. “We are excited because technology is moving at a breakneck speed and is being exploited just as quickly. We must invent just to remain relevant—especially so in the maritime domain—so innovation is essential.

“And as technology evolves so must we, or we risk being rendered obsolete”, Spencer said. “We are evolving through a partnership which combines innovation from diverse industry technologies, brought together through common values for which our industry-to-industry relationship has identified over 30 projects where we could collaborate to mutually enhance our defence capabilities”.

The 20 British firms exhibiting at the event had experience of previous MAST events around the world, but were all taken aback at the high degree of interest in the equipment and technology that they were showcasing.

“It has been manically busy; so busy that I ran out of brochures before lunchtime on the second day”, said Steve Kerchey, who retired from the Royal Navy with the rank of commander and is now senior business manager for Chemring Countermeasures Ltd.

Based in Salisbury, Chemring is a world leader in the development of passive expendable decoys that are deployed to protect ships from the threats posed by anti-shipping missiles. The most advanced system in the firm’s armoury is the new 12-barrel Centurion launcher, which attracted a good deal of interest as the first trainable system on the market, Kerchey said.

“I’ve been speaking to a lot of people from the Japan Maritime Self-Defense Force (JMSDF) and they’re very keen to hear what we can do”, he told BCCJ ACUMEN. “I think that is, in part, because they have not had the opportunity to go to an event like this in the past”.

As well as conferring with JMSDF officers, Kerchey held meetings with representatives of Japanese shipbuilders interested in incorporating Chemring’s solutions in their designs, as well as with system suppliers and procurement firms.

Airborne Systems Ltd., based in Bridgend, South Wales, is similarly in the anti-missile countermeasures sector of the defence market. It signed a deal worth ¥5.14bn with the US Navy in 2013 for its ship-deployed reflective decoys. The system has also been snapped up by the Royal Navy and the Royal New Zealand Navy, according to Peter Barrett, business development manager for the firm’s Electronic Warfare Division.

“The main thing that has been of interest to the Japanese officials that I have been talking to is that the British and US navies both use this system”, Barrett said. “This means there is clearly a need for this type of capability and that has really struck a chord here”.

Since the change in attitude in Tokyo towards the defence sector and the increasing defence budget, Airborne Systems has made Japan one of its key targets.

“We have not got into pricing with any of the people that I have spoken to yet as we’re primarily here to promote the capabilities of the system, to explain how it is updated to meet the continual advances in missile systems, and to make new contacts”, Barrett said. Down the line, he added, the firm would be interested in working with an agent for the Japan market or directly supplying the JMSDF.

“Another thing in our favour, as a British company, is the enormous respect that the Japanese have for the Royal Navy”, he added. “And it looks very good on our CV for us to be supplying the British and US navies”. 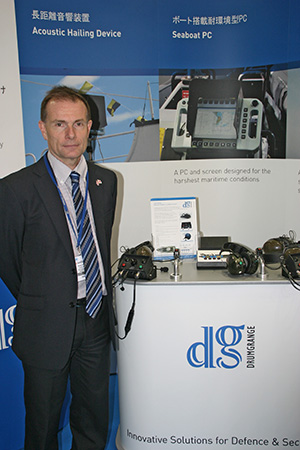 Other firms have already made a breakthrough in the Japanese market, with Drumgrange Ltd. winning a contract one year ago to provide its advanced acoustic hailing devices to the Japan Coast Guard.

With a range of 2km, the system is used to warn small craft that approach a warship. It has proved its effectiveness with navies carrying out operations against pirates off Africa’s eastern seaboard. A small, man-portable version has been deployed with British troops operating in Afghanistan, said Peter Hardman, technical manager for the Surrey-based firm.

“We started looking into export opportunities about 18 months ago, and were lucky to team up with a local partner, Marubun Corporation, which meant the entire process moved much faster than we had anticipated”, Hardman told BCCJ ACUMEN.

“The products resonated well with the Japanese company and it only took about four months from the contract being signed for the systems to be in service”, he said.

Hardman has high hopes for the Japanese market now that the firm has a foot in the door of the defence sector here.

“For the first contract, it was a case of being in the right place at the right time, because we expected it to take longer to build up contacts and a reputation”, he said. “But we found a good partner, we have our products in service here, and for future sales we can always point to that as evidence of what we can do”.

British Ambassador to Japan Tim Hitchens CMG LVO expressed his delight at the strong representation from the UK defence industry at the first MAST exhibition to be held in Japan. “Britain’s defence industry is a national success story”, he told BCCJ ACUMEN after visiting the event. “Across the UK, British engineers, scientists and apprentices, metalworkers and manufacturers, programmers and project managers, and many more besides, are working to ensure that our armed forces have the best equipment in the world.

“They are not only making an essential contribution to our national security, however, but to our economy, too”, he said. “Well over 100,000 people work in this industry, in high-value, high-tech jobs, with a turnover of more than £22bn a year.

“And given the expertise we have to offer, it is unsurprising that the UK is also the largest exporter of defence equipment and services in the world, after the United States, with over £8bn in sales last year”, he added.

“The companies here have been gearing up for this event for six months now and I think the British firms have been very pleasantly surprised at the degree of interest in what they do”, said Hardy. “Things are changing in the defence sector in Japan and they are looking for new solutions, which is what our companies can deliver.

“Change in Japanese business attitudes can often take a long time, but we are hoping to see things move a little faster in this area now”, he said. “But it is still a case of companies needing to make important contacts, build up trust, reach agreement, share data and, eventually, reach agreements and sign contracts.

“But I’m confident those sorts of deals will emerge as a result of this event”, he added.