The UK and Japan have signed an agreement to jointly develop a state-of-the-art fighter jet, utilising both nations’ advanced technologies as well as knowledge obtained by British forces in combat situations.

The agreement is the latest demonstration of the burgeoning defence and security alliance between London and Tokyo, which includes collaboration on the development of a next-generation air-to-air missile, amphibious capabilities, countermeasures against improvised explosive devices, cyber security and, potentially, the sale of helicopters and other military hardware to the Japanese armed forces.

The closer alliance dates back to 2010, when the Japanese government altered the nation’s Basic Policy on National Defense, which had been in place since 1957, but no longer reflected the challenges of the Asia–Pacific security situation. In the new environment, the concept of a Dynamic Defence Force switched the focus of defence policy to a more proactive ability to defend Japan’s territory and to contribute to international peace and stability.

That was taken a step further in 2014, when the Cabinet concluded that the constitution does grant Japan the right to exercise collective self-defence in certain circumstances that are in the interests of the nation’s security.

In the same year, the government lifted the ban that had prevented Japanese defence-related firms from exporting products that could be classified as arms. Under the new regulations, known as the Three Principles on Defense Equipment and Technology Transfer, defence-related equipment may be exported to support international peace and stability. Japan consequently has set up equipment-related cooperation agreements with the UK, the United States, France and Australia, to encourage mutual development of new, advanced systems.

Underlining the commitment to collaborate, an agreement was announced in March between the UK Ministry of Defence and Japan’s Acquisition, Technology and Logistics Agency for the joint development of a new fighter.

The two nations are collaborating on a new version of MBDA’s Meteor air-to-air missile.

Taking flight
The fighter jet project is still in its infancy and British firms in the defence sector are playing their cards very close to their chests about the opportunity. But a statement by the Japan Ministry of Defense states that the two countries will “exchange information and advanced aviation technology”, as well as conduct a joint feasibility study on the planned new fighter.


That agreement enables British firms to move on from the decision taken in December 2011 for Japan’s next-generation fighter. When the Japanese government selected the US-made F-35A Lightning II, there was understandable disappointment among the British firms that were part of the rival bid promoting the Eurofighter Typhoon. Those firms included BAE Systems Ltd. and Rolls-Royce plc, while questions were asked by some experts about the Japanese decision to yet again purchase US equipment.

Speaking to BCCJ ACUMEN shortly after the 2011 decision, Gareth Jennings, senior aviation specialist with IHS Jane’s, said, “Japan’s decision to buy the F-35 comes as something of a surprise to many analysts as of all the contenders, it seems the most unlikely fit for the country’s performance and timetable requirements”.

In particular, while the Eurofighter Typhoon was developed to be an interceptor and fighter aircraft first—arguably the primary requirement of the Japan Air Self-Defense Force (JASDF), given the rapid expansion of China’s air force and its increased belligerence in and around Japanese air space—the emphasis in the design of the F-35 is on interdiction and strike capabilities, Jennings said. And that hybrid approach impacts its capacities as a fighter.

The F-35 deal is, however, considered a short-term solution and Japan is expected to go ahead with an order for as many as 100 fifth-generation air superiority fighters by the 2030s. There is a good possibility that, instead of developing an entirely new domestically built aircraft or purchasing an existing aircraft, Japan will opt to partner with a foreign firm to develop a new platform.

The Royal Air Force (RAF) has played its part in highlighting the capabilities of existing and potential future aircraft, with four Eurofighter Typhoons landing at JASDF’s Misawa Air Base last October to take part in the first joint exercise involving foreign military forces other than those of the United States. The fighters were from No. 2 (AC) Squadron, based at RAF Lossiemouth in Moray, north-east Scotland, and were accompanied by a Voyager tanker-transport aircraft from RAF Brize Norton, Oxfordshire, all of which took part in the Guardian North 16 exercises.

Flying the flag again in late April, two Merlin helicopters from the Royal Marine Commando Helicopter Force arrived in the Kyushu port of Sasebo aboard the French Mistral-class amphibious assault ship Jeanne d’Arc, along with a 60-strong Royal Marine contingent. The aircraft—built by Westland Helicopters and Agusta of Italy and also used by Japanese forces—took part in the first ever four-nation exercise involving forces from the UK, France, the United States and Japan. The forces conducted exercises at US islands in the Pacific in early May.

Japan and the UK are also moving ahead on the development of an advanced version of the Meteor beyond-visual-range, air-to-air missile, developed by MBDA Missile Systems, a European defence consortium that is 37.5% owned by BAE Systems.

The Meteor is already in service with the air forces of the UK, France, Germany, Italy, Spain and Sweden, and is being tested by the US for its F-35 aircraft. The agreement with Japan will see advanced technologies integrated into the missile, making it more accurate.

Announcing the lucrative deal in January, UK Defence Secretary Michael Fallon said, “Japan is our closest security partner in Asia, and I want to significantly deepen defence co-operation between our two nations.

“We will do that through joint exercises, reciprocal access to our military bases, military personnel exchanges and cooperation on equipment, including a new air-to-air missile”.

Long haul
Another BAE division was last year awarded a contract to produce new Assault Amphibious Vehicles for Japan’s military, underlining the need for Japanese forces to enhance their abilities to land on an island held by enemy forces. The 30 new vehicles have improved engines and drive trains, as well as upgraded suspension, meaning they exceeded the Japanese forces’ original performance requirements. Japan will take delivery of the vehicles by year end. 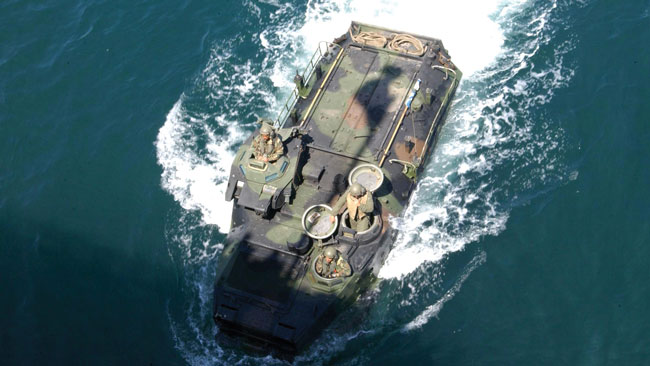 As well as BAE Systems and Rolls Royce, major multinational defence contractors, such as Thales Group, have large UK identities and a significant interest in the Japanese market.

There are also several dozen smaller, specialist firms that are investigating Japanese options. These include communications equipment and body armour—an area in which British firms are acknowledged world leaders—to systems that enable troops to detect, identify and protect themselves from, nuclear, biological or chemical contamination, such as respiratory equipment, as well as technology to detect, disable and destroy land and sea mines.

One such firm offering consultancy expertise in the security sector is Lutra Associates, based in Dorset.

Chief Executive Officer Tim Otter has 15 years of experience operating in the Japanese market and recently took part in a trade mission to Japan, during which he held talks over detection and filtration systems designed to provide protection against chemical, biological, radiological and nuclear attacks.

An Aegis-class warship, for example, needs a filtration system to protect its crew; another system stored on the ship, ready for installation when the previous filters expire after three months; a third set in the supply chain; and a final system in storage. Should such systems be required for every warship in the Japanese fleet, then it is a very large contract that needs to be filled, Otter said.

“The key to doing business in Japan is persistence and building relationships”, he said. “That is what is required to be successful there, and anyone wanting to get a foot in the market just has to do it. You have to go to Japan prepared for the long haul”.