The story of UK–Japan relations is a long one. The UK was one of the first countries—along with the Netherlands—to establish relations with Japan after it emerged from the isolation of the Edo period (1603–1867). During the Meiji Restoration that began in 1868, the UK became one of the key advisor nations to Japan, and the Anglo-Japanese Alliance (1902–1923) was modern Japan’s first pact with a great power. In 2013, celebrations marked the 400th anniversary of diplomatic links, highlighting how long we have known each other. 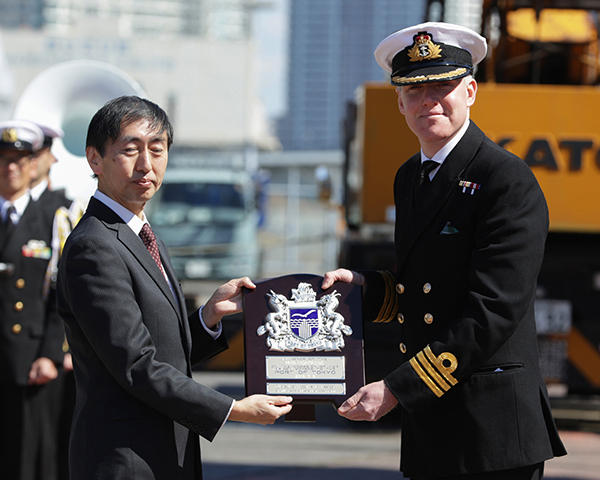 Despite being separated by great distance, we have some fundamental similarities. We are both consti­tutional monarchies, parliamentary demo­cracies and island nations on the edge of continental neighbours. We are both fervent supporters of rules and systems that promote peace, security and prosperity, and we have a common ally in the United States.

It is therefore no surprise that Japan has looked to the UK for friendship in the military domain. The Royal Navy and Imperial Japanese Navy fought alongside each other in the Mediterranean during WWI, and there are other examples of a common history—the Japanese memorial ship Mikasa in Yokosuka being built in the UK in the late 1890s, for example.

There has been a resurgence of activity between British and Japanese forces, and a closer bond has developed between our defence ministries as well. While Japan and the United States have a rock-solid security alliance formed in the 1950s, Japan appears keen to strengthen its relation­ships with other global partners such as the UK. We have found an easy-to-work-with, like-minded defence partner in each other.

Some important meetings have served to under­pin—and indeed endorse—this recent increase in activity. British Prime Minister Theresa May visited Japan in August 2017. It was a very success­ful trip, particularly for defence. The UK and Japan agreed two joint declarations, one on defence and the other on prosperity. The Japan–UK Joint Declaration on Security Cooperation includes specifics pertaining to joint military exercises and building military capacity in other nations, as well as counter­terrorism and cyber relationships. Japanese Prime Minister Shinzo Abe visited the UK on 10 January, and the defence dialogue was of signi­ficant importance to this visit, with both sides having much to discuss, including a new commit­ment to an infrastructure dialogue and many broader security issues, such as building capacity in other nations across the Indo-Pacific other than just Japan and the UK.

Supporting these prime-ministerial visits, there is also an annual meeting—called the 2+2—led by each nation’s foreign and defence ministers. The most recent 2+2 took place at the end of 2017 at the historic Old Royal Naval College in Greenwich, London. During that meeting, then-Japanese Minister of Defence Itsunori Onodera visited the new Royal Navy aircraft carrier the HMS Queen Elizabeth along­side in Portsmouth and he was the first non-UK Minister to visit the ship. It is hoped the next 2+2 will be held later this year and will be held in Japan. This is a strong priority for both administrations. 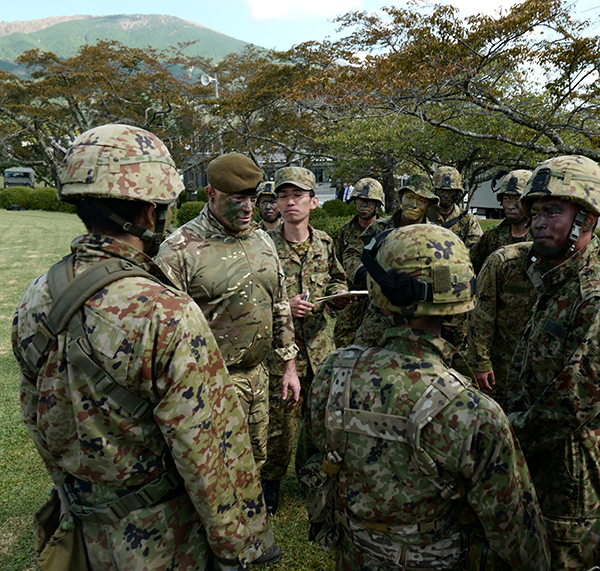 These meetings have been critical to providing the framework for a real advance in defence cooperation, and there has been some signi­ficant activity by the Royal Navy and British Army. Both have been increasingly active with their Japanese partners, strongly encouraged by the Japanese authori­ties. Per the specific initiative of then-Defence Secretary Gavin Williamson, the HMS Sutherland, a Type 23 or Duke-class anti-submarine-warfare specialist frigate, worked closely with its Japanese counterparts in Japanese waters. The Sutherland was the first Royal Navy war­ship to conduct operations in support of the United Nations Security Council Resolution (UNSCR) to enforce sanctions on North Korea.

Embargo operations in support of the UNSCR were also carried out by the Royal Navy Fleet Flagship, the HMS Albion, a major amphibious asset with a Company of Royal Marines on board. The Albion was a significant presence in Japanese waters for many months. She was also to take part in a detailed amphibious exercise on the beach at the Numazu training area in southwest Tokyo. Japanese marines from the newly formed Japanese Amphibious Rapid Deployment Brigade, together with Royal Marines, were to use the Albion’s landing craft for the exercise. Sadly, this drill had to be cancelled at the very last moment due to a typhoon.

Despite the cancellation, preparation for the exercise showed that the Japanese and British were capable of detailed joint planning processes between their maritime and land forces. It was a signi­ficant “first” for the Japanese to do this with a military other than that of the United States. 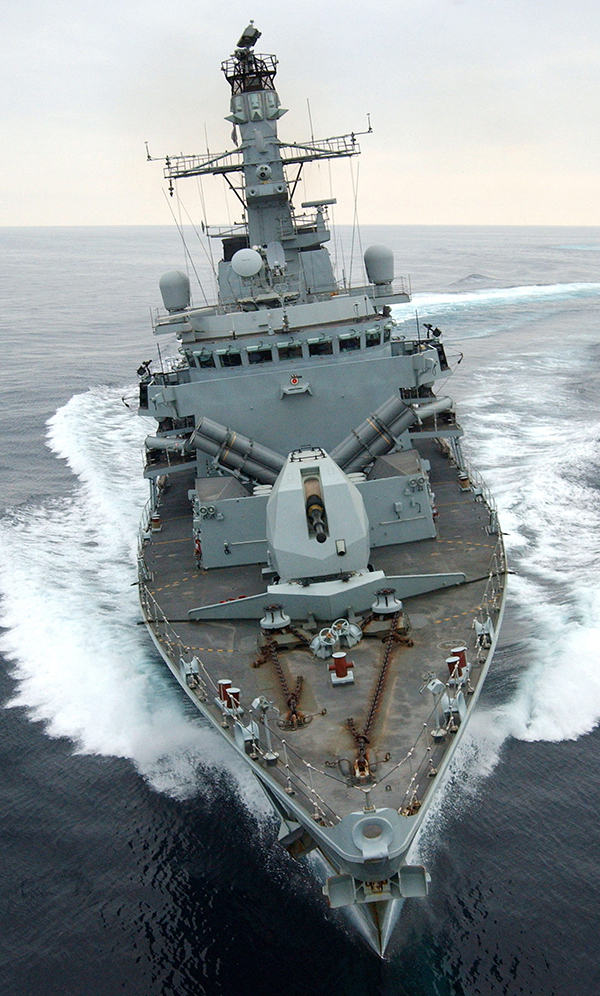 The Albion also spent time alongside Harumi Pier in Central Tokyo, where she conducted a major recep­tion and was opened to visitors. Some 6,000 Tokyoites got the opportunity to visit the ship and see her capability, as well as to talk to her sailors and marines.

Another Duke-class frigate, the HMS Argyll, followed the Albion and conducted further UNSCR enforcement patrols. A holiday break along­side in Yokosuka, home to the US Navy’s Seventh Fleet, meant that the Argyll’s crew were treated to Christmas and New Year’s Japanese style, with Kentucky Fried Chicken and sake! She then departed for home via further enforce­ment operations.

The last ship to visit was the HMS Montrose. She was undertaking a circumnavigation of the world and had arrived via a Pacific-Ocean transit that passed by the South Pacific islands. The route led back to her forward deployed base in Bahrain via Singapore and the Indian Ocean, where she also conducted operational exercises with Japanese Self-Defense Force vessels. The Montrose was along­side Harumi Pier for nearly a week in March. As the Albion did, she opened up to visitors and another 6,000 people stopped by—no mean feat for a frigate-size ship!

The British Army and Japan Ground Self-Defense Force (JGSDF) have also been hard at work. During October last year, the British Army deployed, with the strong support of the JGSDF, 63 members of the Honourable Artillery Company—the oldest formed military unit in the world—to the Sendai and Fuji exercise areas. There they conducted a detailed covert surveillance exercise with JGSDF troops. This was again a huge success, not just in the execution of the event, but also in the planning. Once again, it showed how easy it is for our forces to plan and execute joint military operations. The British Army has extended an invitation to the JGSDF to visit the UK, and there is a strong desire from both sides to make these land exercises regular events.

Military visits have been the visible and drama­tic evidence of our rapidly growing defence relation­ship, but there has also been much activity as we assist Japan with their security preparations for upcoming major events. Drawing from the UK’s experience planning and delivering the hugely success­ful London 2012 Olympic and Paralympic Games, we are helping Japan ensure success and security for the iconic Tokyo 2020 Olympic and Paralympic Games and the Rugby World Cup 2019.

Our acquisition and defence industry commu­ni­ties have capitalised on a warming of relations. We now have a strong relationship in the field of technical collaboration. We are in the early stages of what is known as the Joint New Air-to-Air Missile Programme (JNAAM), working together to assess the feasibility of a Japanese seeker on a European air-to-air missile and are comparing notes on our respective future fighter aircraft programmes. Our ability to share detail on technical and industrial collabo­ra­tion is something that will underpin, in the future, our ability to work together. Common equip­ment will lead to common operating proce­dures and, ultimately, enhance our ability to promote “interoperability,” which is a signa­ture of mature military forces that are confident in each other’s presence.

It is also interesting to note that the Japanese shipbuilder Japan Marine United Corporation (JMU), based in Yokohama, has been invited to bid on construction of two new British Future Solid Support ships to support the Royal Navy. The JMU bid will include significant levels of British input, notably the design support. 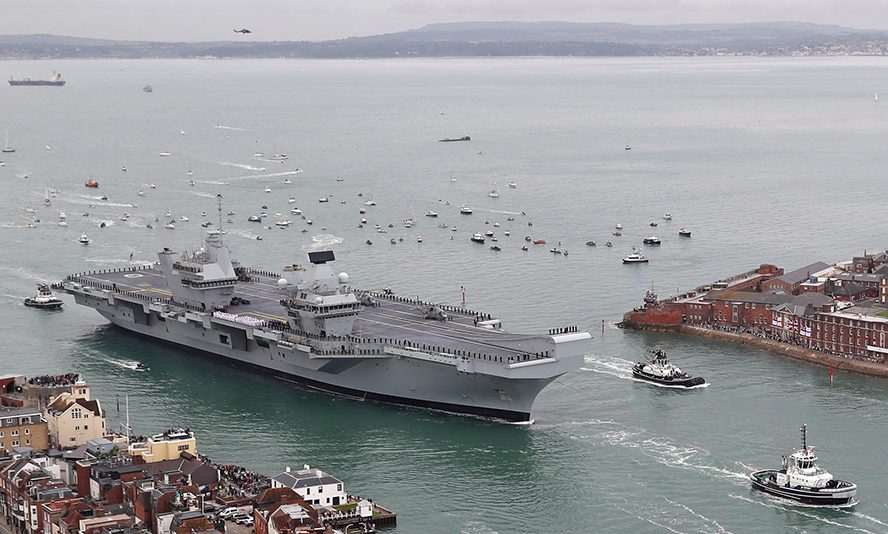 Clearly it has been a successful couple of years. So, what of the future? The UK and Japan are set to cement our defence and security relationship, and our militaries will continue exercise planning and execution. Both our Prime Ministers have agreed that there is a need for an enhanced legal frame­work to support regular ship visits and joint exercises, and the UK is talking in some detail about making our naval presence more persistent. Perhaps the best indication and descriptor of our desire came from the UK Secretary of State for Defence at the recent Shangri-La Dialogue in Singapore. She stated, “And for Global Britain, that means, first and foremost, that we need to be present. And that our presence must be persistent, not opportunistic. And that is why we have seen the Royal Navy maintain an almost unbroken presence in the region over the last 12 months. And why that will continue in the future, and will include our new flagship HMS Queen Elizabeth, in one of her first opera­tional deployments in a couple of years’ time, and we will deepen relationships, and we will forge new ones”. 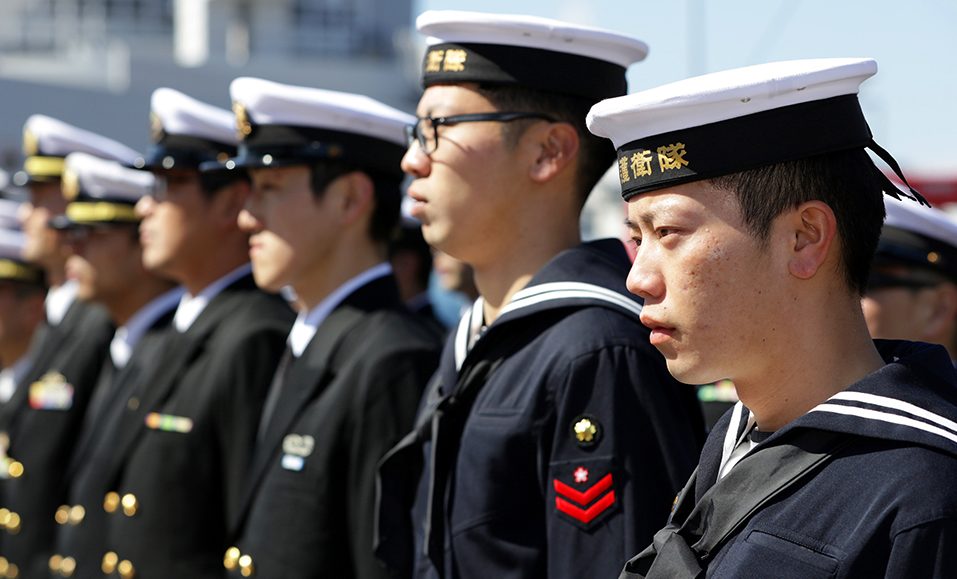 During 2018 and the start of 2019 we have seen some signi­ficant rekindling of the UK–Japan defence relation­ship. Indicators are that both sides want this to continue and improve further. In the year to come, we are likely to see more exercises and initia­tives to learn from each other as both our nations do more to promote a rules-based interna­tional system, and look to deepen the security and stability that underpins this region’s prosperity.

Of further interest is the decision by the Japanese Ministry of Defense to procure the Rolls-Royce MT30 maritime propulsion Gas Turbine for the future Japanese frigates, building on the success of the earlier Spey engine which is widely used by the JMSDF. This engine is in wide international use and particularly with the US, Republic of Korea and Italian navies as well as the Royal Navy.