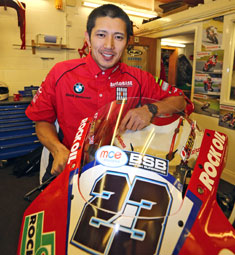 A rider from Saitama has signed with the Buildbase BMW Motorrad team for the 2014 British Superbike Championship, SBK News reported on 16 December.

To date, Ryuichi Kiyonari has had 43 wins in the competition, and is one of the most experienced racers who will participate.

He has won the championship three times—in 2006, 2007 and 2010—and built a massive British fan base.
The 2014 competition will be held from April to October over a series of 12 events, including eight UK circuits and one in Europe.

The Buildbase team is a partnership between BMW Motorrad UK and US-based Hawk Racing.