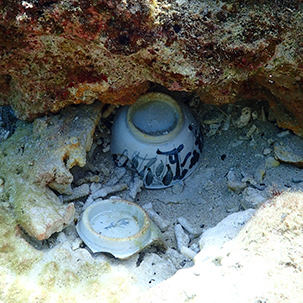 Beneath the azure waters surrounding the islands of Okinawa, archaeologists have identified nine shipwrecks. Of those nine, no fewer than four are British.

The discovery of ships such as the Benares, the Indian Oak and HMS Providence underlines the long-standing maritime traditions that bind Britain and the islands of what was then the Ryukyu Kingdom, a monarchy that spanned the archipelago between Taiwan and Kyushu from the 15th to 19th centuries. Archaeologists hope that further research will shed new light on the vessels that plied these waters in the 18th and 19th centuries, the men who crewed them and our shared ocean-faring history.

The search for historic ships off Okinawa is being led by the Nansei Islands Underwater Cultural Heritage Study Group. Key members include Chiaki Katagiri, chief curator of archaeology at the Okinawa Prefectural Museum & Art Museum, and Yumiko Nakanishi, an archaeologist with the Osaka Prefectural Board of Education who has spent more than seven years studying in Britain.

The location of the wreck that has taken up much of their research efforts over the past decade is near the village of Ginama, on the far north­-west coast of Okinawa’s main island. The scant records that were initially available indicated that it was a wooden ship loaded with peanuts, rice, tea and lumber that sank after attempting to take shelter from a typhoon in 1872.

Of the 18 crew, five survived while the bodies of four men were washed up on the shore and buried by local residents. The others, including Captain James Anderson, were never recovered.

The dead were buried in a plot which is still known as the Dutch Grave—Dutch because Japan was still largely closed to the outside world in the late 1800s and only the Dutch were permitted to trade at a limited number of ports. As a result, the Japanese assumed that all outsiders were Dutch. 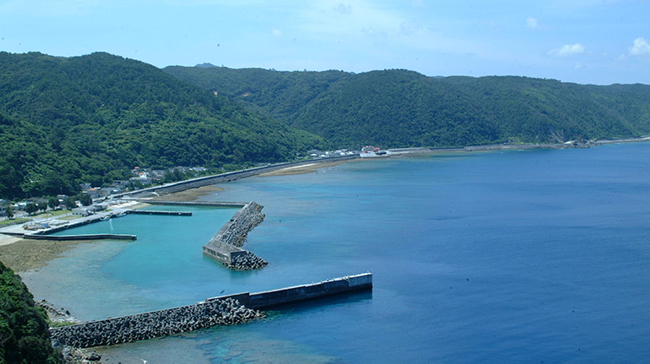 Other hints of the ship’s fate dot the area, including a large anchor that is on display at a nearby port and granite slabs that have been used in the local graveyard.

“Based on this information, we started our underwater search for the exact site of the wreck in 2003,” said Katagiri in a presentation at the Daiwa Foundation Japan House in London. The foundation has provided a grant to assist in the research and continues to extend support for the archaeologists’ work.

“And we were incredibly lucky to find the site on the very first dive,” Katagiri said. “We were able to identify on the seabed parts of a ship that is clearly Western in design”.

More than a century after the ship went down, nothing of her timbers remains, although the archaeologists have recovered a metal ventilation duct, a pulley, copper sheeting, nails, shards of European ceramics, wine bottles, a fork, a butter knife and large numbers of ceramic bowls with Chinese designs.

The artefacts were at depths of between two and eight metres, and just a few hundred metres off the village’s beach. 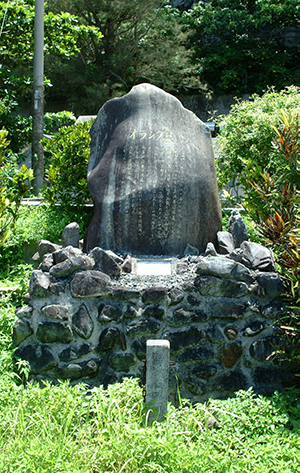 The next phase of the investigation took researchers to Tokyo and, eventually, London’s Guildhall Library. Records confirmed that the ship was the Benares, a clipper of 822 tons that was completed in 1860 in the United States. It had originally been used to transport wool from Australia to Britain.

The records also showed that the Benares departed Hong Kong bound for San Francisco on 13 September, 1872, but sought shelter from a typhoon in a bay in north-west Okinawa on 6 October. The storm was so violent, however, that it sank the ship.

Further research at the National Archives in Kew revealed the ship’s official registry and a wealth of other information, including an addition to the registry in red ink dated 1 March, 1873, stating that the ship had been lost.

Nakanishi was even able to confirm the address of the owners of the ship, although the district of London where their offices stood has since been redeveloped and the road no longer exists.

Rigged with three masts and with two decks, the Benares measured 50m from bow to stern and 4.5m at her widest point. The paper trail also revealed the names of the ship’s owners and her previous masters, as well as a rudimentary contract for the crew that laid out their meals—including bread, pork and a half-pint of rice on Sundays—but also explicitly forbade spirits on board and profane language.

Most poignantly, the documents also name the crew on the Benares’s final fateful voyage and identifies the four men who are still buried in Okinawa. They are 24-year-old Second Mate Robert Dummelow; 28-year-old cook and steward Samuel Ruffle, from Sudbury in Suffolk; Andrew Johnson, a 22-year-old able seaman from Sweden; and Frederick Brett, a 19-year-old apprentice from Southampton who was making his first voyage.

Records uncovered in Tokyo also show that, while the local people—fellow seafarers—were unable to communicate with the survivors, they fed and cared for them until they could be handed over to the local authorities. They were later returned to Hong Kong, and a wall clock was subsequently sent from the owners in London to the village as an expression of gratitude. The clock was unfortunately lost in a fire some years later.

A number of mysteries remain, however, including the Chinese-style bowls that were found but were not on the ship’s manifest. There are suggestions that they were being transported to California as they were in demand among the state’s large community of Chinese labourers.

Nakanishi, who studied at the University of London before completing a three-year Bachelor of Arts degree at Durham University and a Master of Philosophy at the University of Cambridge, where she has also been working on her PhD, said another aim is to trace the relatives of the four men buried in Okinawa.

Ideally, she said, if the descendants of the men can be traced, then she hopes they might be able to visit the grave and the site of the wreck.