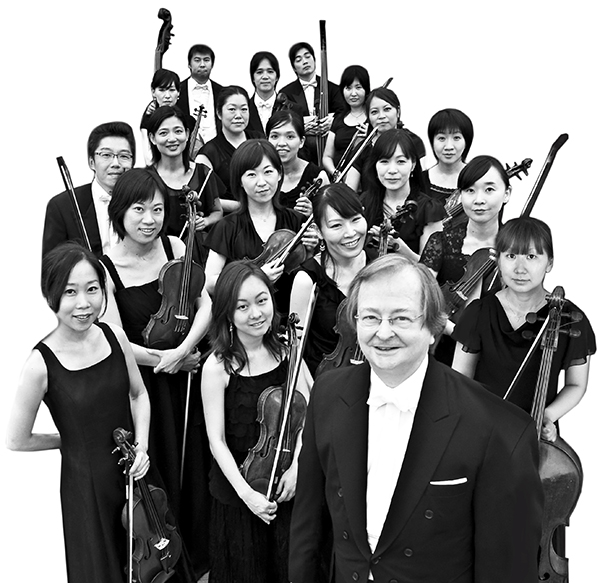 Public reaction to the coronavirus crisis is seriously eroding not only transport, manufacturing, services and education, but also entertain­ment and the arts. It is threatening the livelihood of our players and, indeed, the very survival of the Tokyo Sinfonia.

As professional musicians, we choose to face this threat by making and sharing our music—however and wherever we can—for as long as it remains possible.

I sense that the whole world is changing, and hope that, as a result, the world is not deprived of true beauty. We had a splendid response from our recent audience for all three Bizet selections: Four Bohemian Scenes, Symphony in C Major and Symphony in C Minor (Roma). We had a few additional ticket sales at the door, and wound up with a paid audience filling about a quarter of the hall.

When our special guest asked, “How many of you are classical music fans?”, only half a dozen hands went up. Attracted by the popularity of our special guest, who himself was also new to classical music, 90% of our audience indicated they were attending a classical concert for the first time. We received many completed questionnaires after the concert. Especially as such a large proportion of the responders were writing of their first experience attending a concert of classical music, the comments were not only delightful to read but also highly useful. Everybody was happy after the concert, including the orchestra players, our staff, our special guest, his management, our producer, their staff and the staff of the hall.

Our recent performance in Oji Hall was the only one presented in that wonderful venue during the entire month of March. We also may well be the only performance there in April, but—unless someone in the Tokyo Sinfonia falls ill—we’ll be there.

Several of my players have asked about our April programme, quite correctly wondering about our guest artist, an absolutely splendid German soprano recommended to me by the Berlin Philharmonic. I must speak with her soon before I make a decision on this, but obviously there may be serious issues to resolve both here and there.

My best to all ACUMEN staff and readers.

The Embassy of Mexico in Tokyo, Japan
3 July