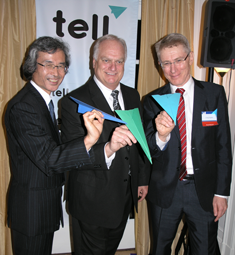 Forty years ago, a lone volunteer in a small room somewhere in Tokyo picked up a phone and said: “Tokyo English Life Line. Can I help you?”

No one knows what issue the caller in that case needed to talk about, but in the years that have followed, volunteer counsellors have dealt with everything from simple requests for information and the need to talk about marital, cultural or other difficulties, to potential suicides.

In April, Tokyo English Life Line (TELL) celebrated its 40th anniversary with a gathering hosted by Ambassador of the Kingdom of the Netherlands to Japan Radinck Jan van Vollenhoven at his Tokyo residence.

The event was an opportunity for the organisation to thank its many volunteers and sponsors—past and present—and to announce new initiatives, including a new logo (designed by McCann Health Communications). On the night, Craig Saphin was introduced as the new chair. He has taken over from Dr Tsuyoshi Akiyama who, as TELL’s chairman of the board since 1999, had served with great dedication, skill and energy, and who will continue to serve as chairman emeritus.

Over the past 40 years, the helpline has responded to over 200,000 calls and, each year, it handles around 7,000 calls for help, according to Jason Chare, TELL’s director of Life Line Services.

“The callers have genuine counselling issues: depression, anxiety and cultural adjustment, as well as certain emergency situations such as domestic violence, sexual assault and, of course, suicide”, said Chare.

“Indeed, the high suicide rate in Japan is a continuing challenge”, he added.

In addition to counselling those who are suicidal, TELL has developed a suicide prevention programme that teaches the community how to recognise the signs and take action if someone around them appears to be in trouble.

Callers to the lifeline comprise all ages and nationalities but, according to Chare, the majority are Japanese. There is a pressing need for more volunteers.

Currently, there is no English language telephone support in Japan outside the core time (9am–11pm). Plans are in place to train volunteers in the Kansai region, thus support and donations from the local community are urgently needed.

TELL has continued to evolve over the years and, in 1991, reached a very important milestone with the establishment of TELL Counseling. In addition to conducting specialised testing programmes, the face-to-face service has so far provided professional care to more than 6,500 people and currently admits over 300 new cases each year.

“Over the past 40 years, we have blazed a trail for mental health awareness in Japan. We have supported Japan’s international community through professional counselling, child protection outreach, exceptional parenting workshops, suicide prevention, and disaster response”, said Linda Semlitz, clinical director of TELL Counseling.

“But we must look to the future and the work that remains to be done”, she added.

The 40th anniversary event presented an opportunity for TELL to not only launch its new brand, but also to announce its “Forty for the Future” campaign. The drive aims to raise ¥40mn before March 2014, to ensure that the organisation can continue to provide world-class, effective support and counselling services.

Corporate and individual pledges are, of course, welcome at any time. However, one innovative way of supporting TELL’s ongoing work is to choose a day to save a life.

In this initiative, donors can sponsor one shift, or even a whole day (four shifts). The sponsorship can then be dedicated to any special occasion—a birthday or anniversary, say. Moreover, the donor will know that, through their funding, they are truly making a difference in someone else’s life. Indeed, they may even be helping to save that life.