Worst is over but massive clean up ahead

Sir John Beddington refuses to make a drama out of a crisis.

The chief scientific advisor to the British government and head of the Government Office for Science was in Japan in late May for discussions with his Japanese counterparts about the ongoing situation at the Fukushima Daiichi Nuclear Power Plant. He also gave a full and frank briefing on the status of the facility at a BCCJ luncheon attended by more than 110 members and guests.

Immediately after the 11 March Great East Japan Earthquake struck, triggering the colossal tsunami that crippled the reactors at the Fukushima plant, the British government set up its Cobra Committee and asked Sir John to pull together the appropriate scientists to form the Science Advisory Group in Emergencies. 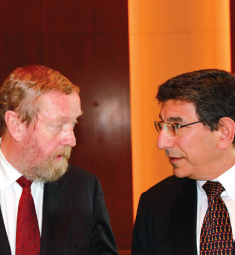 “The challenge that I was posed by the prime minister was what we should do and what advice we should give to British nationals in Japan and the staff of the embassy here”, he said. “That was a fairly straightforward question, but we had almost no information at that time. In that chaotic period after the earthquake and the tsunami, the information that was available was very sparse”.

“We knew, through the Tepco website and from international sources roughly how much radioactive material was stored at Fukushima”, said Sir John. “So in our reasonable worst-case scenario we envisaged a single reactor going up, a meltdown of the fuel rods, a reaction with the concrete floor of the chamber that causes a hydrogen explosion.

“In the worst case, we expected radioactive material ascending to 500m into the air for about one hour”.

Combined with an assessment of the weather conditions, using modelling tools provided by the Meteorological Office in London, Sir John’s team was able to determine how far and in which directions any release of radioactivity would travel.

“The assessment was that there was absolutely no possibility of radioactivity on the streets of Tokyo and that there was nothing to worry about”, he said.

Not entirely satisfied with that answer, the Cabinet Office requested a more dramatic estimation of what might happen at the plant, termed an enhanced worst-case scenario.

Even with this set of predictions—assuming the burning of nuclear fuel rods, radioactivity at levels around the site so high that it would be impossible to bring the reactors under control, a “cascade” of events that led to three reactors exploding and the fuel rod ponds catching fire—Sir John said there was little to worry about in Tokyo.

“We decided that it would put radioactive material in Tokyo, but in such small quantities that if you took simple precautions, like staying inside, you would be perfectly safe”, he said.

Armed with that information, Cobra took the decision that it was not necessary for British nationals or the embassy to evacuate Tokyo, despite what other national governments were ordering their citizens to do.

But other nations’ advice, coupled with reports in the British press that ranged from the worrying to near hysterical, caused a degree of confusion among the British community here.

“I and two colleagues had a series of telephone conversations with people from the British community in Tokyo”, said Sir John. “This gave the lay public and people who had been confused by the media messages—and the messages in the early days were very confused because the media was trying to sell newspapers—the opportunity to ask questions. 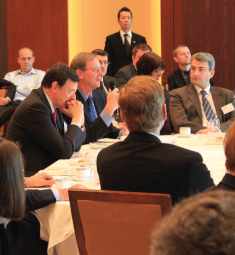 “I was very happy to take questions from people who were quite properly worried about the things they were reading in the newspapers and I hope that we provided some sort of reassurance to people”.

Clearly, however, the problems at the Fukushima plant have not all been solved.

“As more information has come out, people are beginning to understand how the situation went wrong in Fukushima Daiichi”, he said. “It was a significant tsunami but not a hugely significant nuclear release. But there will be formidable clean-up problems, a mass of radioactive brine around the plant, releases into the ocean, and in animal and plant life around the facility.

“The clean-up operation will be enormous, on the land and in the ocean, they will have to handle radioactive fuel and material. It’s not going to be easy”.

Yet despite all the worries over the plant, Sir John emphasised that the entire situation needs to be put into context.