I&S BBDO conducted its 12th National Consumer Value Research (CoVaR®) survey in May 2012. The survey targeted 2,500 men and women nationwide aged between 18 and 69. The points below, taken from the section “Opinions and Behaviour about Internet Information Sharing and Distribution Services”, represent a digest of the survey results.
The questionnaire reveals a significant year-on-year decrease in the ratio of respondents agreeing with the following statements:

The previous survey was conducted immediately after the massive earthquake that struck Japan in March last year. It is, thus, assumed that the Japanese then recognised the need to watch out for false rumours and to share accurate disaster-related information. This year’s results may reflect a rebound from the caution.

Meanwhile, respondents who agreed with the statement, “I can often trust comments on internet sites more than those in the mass media” increased from last year’s 45% to 48%. It appears that there is still distrust concerning news originating with the mass media.

Further, although there is still a low level of agreement with the statement, “I often upload videos to video-sharing sites”, positive replies rose to 8% from last year’s 6%. This indicates the steady mainstream penetration of video-sharing sites such as YouTube. 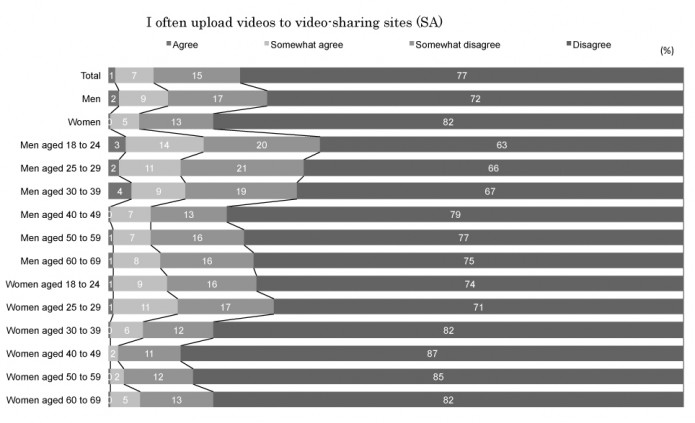 Thus, it is expected that not only young internet users, but also those in their sixties, will increasingly contribute to SNSs. This is especially true for baby boomers, whose desire for new experiences is expected to continue expanding.

Take a Break in Tokyo

The British School in Tokyo