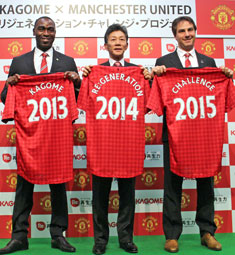 A football behemoth for the best part of the past 20 years—although fans of rival teams are revelling in its present mediocrity—Manchester United (Man Utd) is just as much a colossus of the global business world.

As well as success on the pitch, getting the club’s message out is becoming increasingly critical to winning the support of the estimated 1.7bn followers of the game worldwide. That certainly applies to fans in Asia, believes Jamie Reigle, managing director of Manchester United Ltd. for the Asia-Pacific region.

“We are the number-one club in the world, and I don’t mean that in an arrogant way, but in terms of our overall activity, both on and off the pitch”, Reigle said at the British Chamber of Commerce in Japan event at the Shangri-La Hotel, Tokyo, in mid-January.

“We are in the entertainment business, and a big part of what we do is constantly asking ourselves what would someone like Disney do with Manchester United.

“We have to constantly raise our game and we benchmark ourselves against the best and biggest businesses in the world”, he said.

The Red Devil’s wide-reaching promotional campaigns are clearly having an impact; Man Utd is now ranked the most popular team in the world, with around 659mn followers—98% of whom are outside the UK.

While it has 3mn fans in Britain, the team has 8mn devotees in Japan. The club’s Facebook page is available in 20 languages and has an impressive 37mn followers.

“We have a long history of being in Japan and that has been enhanced with the signing of [midfielder] Shinji Kagawa”, Reigle said. “We first played a game here in 1989 and have been back seven times since, on summer tours and to play in the Club World Championship in Yokohama”.

In its corporate form, Man Utd “tries to behave like a local business” and prefers to forge partnerships with specific types of firms.

“In Japan, one of the partnerships of which we are most proud is with Kagome”, he said. “They were one of our first regional partners and they came to us with a very clear idea of what they wanted to get out of the relationship”.

Kagome Co., Ltd., famous for its vegetable drinks, first linked up with the team in October 2012. The firm insisted from the outset that it wanted to tell the story of the regeneration of areas of north-eastern Japan that had been affected by the March 2011 earthquake and tsunami.

Former players from the club, including striker Andrew Cole, have visited Tohoku and led soccer schools for local children. Other similar projects are planned.

Reigle says Man Utd has transcended merely sport and evolved into a brand that encompasses entertainment, making it very interesting for advertisers and retailers. It has achieved this in large part by melding tradition with innovation.

The team’s home stadium has been on the same site in Manchester since 1910, and some £10mn is spent every year on upgrading the facilities.

Beginning in the 1950s with the Busby Babes—the group of home-grown players who formed the first team under Matt Busby—through to the nurturing of young talent at the club’s academy today, Man Utd’s strategy has enabled it to turn out such names as David Beckham and Ryan Giggs.

“We try to develop stars, tending not to buy star players at their peak”, Reigle said. “We consider that to be our investment in research and development.

“And players like Beckham and Ronaldo are famous for being very good at what they do, but they transcend sport to contribute to the brand”. The development of the Man Utd name appeals to advertisers.

Phil Clement, chief marketing officer of Aon Corp., stated in a Financial Times interview in May 2013 that the club’s global reach made it a sound investment.

“Compare it to running an advertising campaign in 120 countries”, Clement said. “Advertising is difficult. To have one programme that works globally, externally and internally—that’s a nice value proposition”.

Aon signed an eight-year partnership deal with Man Utd worth an estimated $240mn, with the insurance broker’s name now prominent on the team’s shirts. This reaches an estimated global television audience of 49mn people every time the team plays a match.

As Reigle said, “There are very few properties that have that kind of reach and response”.

The club is not content to rest on its laurels, however, and despite having its merchandise distributed in more than 10,000 retail outlets worldwide and selling a staggering 2mn replica shirts each year, new initiatives are still in the pipeline.

“The special thing about football is the shared experience, and we want to try to recreate that”, Reigle said “We have carried out three tests on United viewing parties, in New York, Jakarta and New Delhi, as a brand-building activity, and the response has been excellent”.

More than 21,000 people applied for the 7,500 seats that were up for grabs at the Jakarta event. Many fans got to meet former players, who made presentations before kick-off and provided commentary throughout the match to create a heightened user experience.

The project is scheduled to be rolled out in Tokyo in the coming months, which will add a new dimension to following Man Utd in one of its heartlands.