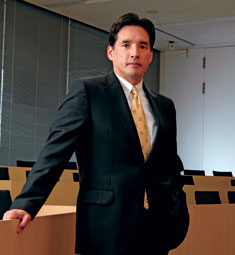 Yoshito Hori makes no apologies for being a glass-half-full person.

Whether it be the economy, the ageing population or any other of a myriad problems that face Japan, the president of Globis University is convinced that these are opportunities of which businesses, society and the government can take advantage.

“I have been investing as a venture capitalist for 17 years, and the quality of the CEOs in Japan and the return on funds that we are seeing now are quite phenomenal”, Hori told BCCJ ACUMEN.

“The heads of six [initial public offerings] last year quit their previous jobs to take a huge risk, but were able to launch public companies.

“These [people] are the best and brightest in Japanese business and there are many more out there”, he explained. “We are now reaching a critical mass of entrepreneurs, investors, incubators, technology and growth of the entrepreneur culture”.

This development is going to turn Tokyo into the next Silicon Valley, Hori believes.

“It’s no longer just potential; it’s already here”, he emphasised, pointing to the success of Yoshikazu Tanaka, the 36-year-old founder of Tokyo-based social gaming firm Gree, Inc. and the second-youngest self-made billionaire in the world.

Hori also singled out Tomoko Namba, who founded web services firm DeNA Co., Ltd. in 1999, while in her late thirties, and now presides over a 10-country, $3.5bn behemoth.

“Not many people think of Japan as a nation of entrepreneurial opportunities, because of the economic problems of the last 20 years, but that’s completely wrong”, Hori said.

The second reason for his upbeat outlook is Abenomics.

“I am very optimistic because Prime Minister [Shinzo] Abe and his cabinet are committed to deregulation and free trade and [I believe] this will cause growth in the economy”, he said. “I would say that what the prime minister is doing is quite extraordinary [for Japan]”.

There are serious risks in easing monetary policy and increasing expenditures when the nation is saddled with a huge budget deficit, he agreed. But the way in which Abenomics has been embraced and is forging ahead causes Hori to believe that it will work over the longer term.

Although outdated regulations in the areas of agriculture, the medical sector, immigration and labour laws are obstacles, they can be overcome with reforms. But Hori identifies energy as the biggest issue that needs to be tackled.

“It is very important that the nuclear power plants be restarted”, he said. “The government needs to decrease electricity costs and show the business community that it can provide a stable power supply”.

Abenomics is already helping to make Japan a better place. He pointed out that it is attracting more foreign investment, enabling more Japanese firms to invest in Japan and, thereby, employ more people. This leads to increased incomes and social stability.

“If you look back over the past six months, since he was elected, Mr Abe has done a lot”, he said. “One thing that surprised people was his declaration that Japan would be joining the discussions on the Trans-Pacific Partnership.

“Previously, the government said it wanted to take part but that it would be ‘difficult’; now the decision has been made”, he added. “[Abe] is clearly committed”.

Set up in 1992 as Globis Corporation, the business school has grown to encompass five domestic campuses in Tokyo, Osaka, Nagoya, Sendai and Fukuoka, as well as branches in Shanghai, Hong Kong and Singapore.

The school’s philosophy remains rooted in the three basic concepts of the Globis Vision: people, referring to developing future business leaders; capital, representing the provision of venture funding with hands-on support; and knowledge, meaning the dissemination of management expertise.

Over 1,000 graduates have built successful careers after attending Globis University, and Hori believes he is in a position to bring together more of the most important thinkers and actors to benefit Japan, Asia and the rest of the world.

One way of achieving this is through the G1 Global Conference. The third session is to be hosted at the university’s Tokyo Campus on 16 September.

“I started the G1 summit as a multi-stakeholder gathering of leaders of Japan”, he said. “Mr Abe attended the first summit with two ministers, the governors of six prefectures, the mayors of seven major cities, a Nobel laureate, CEOs, artists, musicians, and sportsmen and women.

“The theme of this event is how to build a stronger Japan and the positive impact this will have in Asia and the rest of the world”, he said. “We will have 50 panellists and around 200 attendees with the entire event held in English.

“We wanted to do it in English so the global audience will be able to understand and, at the same time, it is important for Japanese participants and viewers to be able to be more globalised in their mindsets and thinking.

“This is a good opportunity to discuss issues that we face in Japan, but also in Asia and around the world.

“The more we understand the issues, the more we can discuss and share solutions”, he added. “And if these conclusions are heard by leaders, they can then work on tackling these problems”.