Taking over as president of Olympus Corporation on 1 April, Michael Woodford MBE joined the small but growing group of foreign bosses at Japanese firms. Based in Tokyo and known as the man who turned around Olympus’ European operations, the 51-year-old Liverpudlian talks about being an insider, an outsider and making changes.

I find that not just from working in Japan; it was the same when I ran firms in the US and Europe. Company cultures are stronger in a business context than are national cultures. In your personal life, and on the basis of value judgments and personal criteria, there are cultural differences; and language accounts for a big part of the differences. But in relation to a functioning enterprise, cultural differences are used as an excuse; to wit, we can’t do this because of cultural differences.

Do you still feel the same way having been here a few months?

The politeness and getting below the superficiality of human relationships is a factor, but you become acclimatised to that. Once you’re discussing specifics—should we make that, should we invest in that, should we set up a subsidiary—the discussions are pretty similar wherever you are. I understand why Japan gets tagged with the “unique” label; it’s one of the most impenetrable cultures for outsiders. 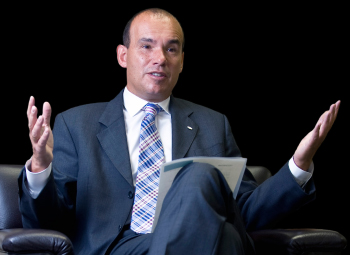 In Japan, there is still a tendency for everything to be pre-decided before a meeting. I’m briefed on an issue; my views are sought. My irritation sometimes is because I have to hear them again at a second meeting and, if the president is seen to endorse something, it makes it even harder for people to have a free and open debate. You don’t want meetings to be ceremonial. I’m one person: there are things I know, there’s a lot I don’t know. You want to have the right people in the forums who are not deferential to the senior people, and will say exactly what they think. That way you get a better questioning, scrutiny and challenging of decisions. Traditionally in Japan “the nail that sticks out gets knocked down” but, once people understand we’re playing by new rules, I don’t find that cultural differences dilute that.

Quite a few of the other foreign CEOs are British. Do you think that’s just a coincidence, or are their cultural reasons?

It’s an interesting question. I’d like to say there were some cultural reasons for the number of Brits but, objectively, I don’t think so.

What are some of the biggest challenges you’ll face as CEO?

Status quo is still very powerful in Japan. We have a whole eclectic group of businesses. When you change something, you close something or withdraw from something, you will get resistance based on my predecessor’s decisions, especially when something is seen as sacrosanct or a holy cow. My starting point is a business-like discussion: where is this business going, can the capital be better deployed elsewhere, is it a distraction?

You said 80% of Olympus’ sales are overseas; what percentage is exported from Japan?

In value terms, about 50% of manufacturing is in Japan. Almost all of our cameras are manufactured overseas, though a lot of the R&D is done in Japan. We have factories in Mexico, Germany, the UK and the US, but the medical endoscope, which is a golden goose for Olympus, is principally manufactured in the village of Aizu [Fukushima Prefecture]. It is a very high-value product and the labour portion of the manufacturing cost is fairly low. But you can’t replicate Aizu; just as Swiss clock makers, it goes back generations and you can’t take that offshore.

You returned to Japan soon after the March disasters. How important was that for you as a new, particularly foreign, CEO?

I left three days before the disasters, having spent a lot of time here since January preparing for the change of presidency, and I came back 10 days after. At the time, the British Embassy [Tokyo] was saying essential travel only. There was a lot of uncertainty and fear; my family was a little reluctant and the scenes in the media were so distressing for me.

I came over on an ANA flight and I was the only Westerner on the plane. Before we landed, the air hostess got me eight bottles of water, and I was thinking—what have I got myself into?

I obtained a dosimeter and, ironically, the radiation levels in Tokyo were lower than they were in Southend-on-Sea.

I think you either have to resign or do the job. Unless there was really strong evidence that Tokyo was dangerous, I had to be here. I found it the most bonding time for me in Japan because there was such a bonding spirit here, which continues to some extent.

We held the new graduates’ entrance ceremony on 1 April, so what sort of message would it have sent if the new president wasn’t here because he thought it was too dangerous? For me, it was unthinkable.

You’ve been with Olympus in one way or another for three decades.

Yes, it makes me sound institutionalised doesn’t it? I joined Olympus in 1980 as a salesman in a British subsidiary; before that I was working for Schweppes. It can be both an advantage and a disadvantage. If I’m compromised because of my loyalties and relationships, then that’s a negative. If you’re running a company I think you do need to try to take the big picture. I know most of the personnel in the company—the good, the bad and the ugly in my own organisation, and the products and the customers. Still, I don’t think it’s a prerequisite; common sense is the most important commodity in business, and the determination to implement what you think should be done.

Mid-career hires at Olympus are still unusual in Japan and, when they do take place, there’s always the question of whether they are really Olympus people. I’d like to encourage that mixing of blood because, like any species, if it gets too inbred and incestuous, it’s not healthy. In Europe I hired a number of people deliberately from outside, specifically because they were stronger at what they were doing than we were.

Particularly in the medical business, if you grew up where you have 70% market share—not because of your firm’s brilliance, but because of 40 years of engineering history and good luck—ironically, that can breed weakness. Some of our business areas are viciously competitive, and people who have grown up in that environment often have a better commercial feel.

Does having been with Olympus all that time help being accepted as the new, foreign CEO?

Over the short term, it has some advantages. But if I don’t change the company and deliver results, all that will be forgotten. Equally, had I come completely from outside, there may have been some hostility, but not if that person went on and made the right decisions and delivered good results. People want to be behind winners.

You said previously that, had you been Japanese, you wouldn’t have been CEO; that seems to contradict what you said about being the outsider.

Being the outsider does not mean being outside Olympus but, in my case, being a Westerner. So my different behaviour is tolerated. I can be very opinionated, loud-mouthed, strong-headed and direct. These attributes perhaps are excused, because “that’s what gaijin are like”. But in Japan, you don’t behave like that while you’re rising in an organisation; you show deference and humility. I was running a sales division a year after I joined it; running a British subsidiary before I was 30. All of these things would not have been acceptable in Japan because it wouldn’t have been my time in the very rigid age hierarchy that still predominates, and a lot of that value system is still strong in this company.

In Japan, I would have upset too many people and have been put in a chair by the window. Japan needs to get to the point quickly where it can release the talent of younger people.

I don’t have a romantic idea about gaijin bosses. If it was the other way around, I would be the one at the coffee machine saying, “Look at the Japanese individual running this prestigious British company. He doesn’t even speak English, so what can he teach us?”