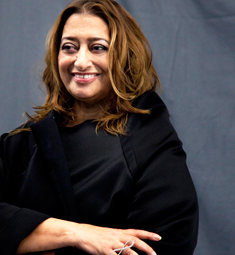 London-based Zaha Hadid Architects fought off competition from 45 other firms for the stadium, which will have a retractable roof, seating for 80,000 people and cost some £130bn.

But it is the sleek, elongated shape of the structure, with flowing lines covered by translucent membranes that will truly make the stadium an iconic addition to Tokyo’s skyline.

“It is an honour for us to be selected to build the new National Stadium of Japan”, said Hadid, who won a Praemium Imperiale in 2009, a global arts prize awarded annually by the Japan Art Association, for her contributions to architecture.

“Our three decades of research into Japanese architecture and urbanism is evident in our winning design and we greatly look forward to building the New National Stadium”, she said.

“The stadium will become an integral part of Tokyo’s urban fabric, directly engaging with the surrounding cityscape to connect and carve the elegant forms of the design”, she said.

“The structure is both light and cohesive, defining a silhouette that integrates with the city”, she added. “The perimeter of the stadium will be an inhabited bridge and a continuous exhibition space that creates an exciting new journey for visitors”.

Announcing their decision in November, Ando said: “The entry’s dynamic and futuristic design embodies the messages Japan would like to convey to the rest of the world.

“I believe this stadium will become a shrine for world sport for the next 100 years”, he added.

The new stadium will replace the present National Stadium, an ageing venue that was built in 1958 to serve as the primary venue for the 1964 Summer Olympic Games, but is now clearly showing its age.

Hadid’s new venue is scheduled to be completed in 2018 and must be ready to host the Rugby World Cup 2019. Tokyo’s commitment to the stadium is also supported by the committee behind the city’s bid to stage the 2020 Summer Olympics.

Tokyo made an unsuccessful bid to host the 2016 Summer Olympics, which will be held in Rio de Janeiro, but has high hopes that it will be selected for the 2020 event when the announcement is made on 7 September, 2013.

Its remaining rivals for the honour are Istanbul and Madrid, while Tokyo is considered the front-runner.

Sir Craig Reedie, the British head of the International Olympic Committee Evaluation Commission, arrived in Tokyo in early March to carry out his four-day assessment of the city’s bid to host the event, with the new stadium likely to be a key consideration.

Hadid, who won plaudits for designing the Olympic Park Aquatics Centre for the London 2012 Olympic and Paralympic Games, needed to meet a range of exacting criteria for the stadium design, notably the use of adjustable seating, a retractable roof, as well as being environmentally efficient and “establishing a dialogue” with its physical surroundings, in particular the nearby Meiji Shrine.

Born in Baghdad, Iraq, Hadid chose a career as an architect and, after studying in Beirut and London, opened her own practice at the age of 30—rapidly earning a reputation for her original and idiosyncratic vision of how buildings should look.

Her works have been characterised by fluid, dynamic exteriors, interweaving geometric curves, straight lines and sharp angles. She has also managed to find time to design furniture and interiors, including the inside of a restaurant in Sapporo and a boutique in Tokyo.

Winner of numerous international competitions for her creations, she was also the visual force behind the artificial landscape formation of the One North Masterplan project in Singapore and, in 2005, won the competition to build the Neus Stadt Casino in Basel, Switzerland.

In 2004, she became the first woman to receive the Pritzker Architecture Prize, the architectural world’s equivalent of recognition by the Nobel committee.

She has also been appointed a Commander of the Most Excellent Order of the British Empire (CBE) and her work was displayed at a retrospective in the Guggenheim Museum in New York in 2006.

Hadid has been deeply influenced by Japanese style and design, and told BCCJ ACUMEN that she dresses almost exclusively in clothing by Japanese designers.