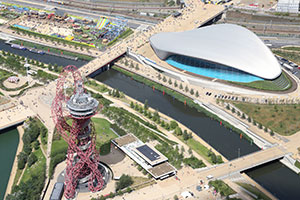 For several reasons, the London 2012 Olympic and Paralympic Games has gone down as one of the most successful in the history of the event. Organisation of the sporting events was widely praised, athletes from the host nation performed well, the public were engaged and excited, and the sun shone—mostly.

Then, after the athletes, spectators and media had gone home, work began on the second transformation of east London. It is this work, protecting the long-term legacy of the Games, that has won just as much applause.

With less than five years until the opening ceremony for Tokyo 2020, the three members of the panel examining legacy creation and planning strategies in Olympic cities have agreed that it is critical for steps to be put into motion very soon for the legacy of the 2020 Games to be ensured a similar success.

“If the sporting events take centre stage, then the city is the theatre backdrop for where everything takes place”, said Andrew Altman, co-founder of Fivesquares Development, a real estate development and consulting firm, and former chief executive of the London Legacy Development Corporation for the 2012 Games. “This is an unrivalled opportunity”.

Addressing the Urban Land Institute Asia Pacific Summit in Tokyo in June 2015, Altman explained that, “the legacy of the Games in London was fundamental to the very DNA of how everything was organised in London. We had to have integration of the policy framework, the financial framework and the institutional framework, all set up in the correct way to ensure the legacy would be a success.”

In truth, the redevelopment of east London was the culmination of a 40-year project that was designed to improve public facilities and housing, at the same time as enhancing the city’s global competitiveness.

Since the fixed date for the opening of the Games served as the deadline for the completion of all the work, hurdles previously in the way of the region’s redevelopment needed to be overcome swiftly. And, indeed, a way around each one of the roadblocks was found.

The transformation of 243 hectares of largely brownfield industrial sites into the stunning Olympic Park in the space of seven years is nothing short of “remarkable”, Altman agreed.

The location of the basketball stadium, for example, has been repurposed for 1,000 units of affordable housing, while the vast global media centre has been turned into a base for research and technology start-ups.

Meanwhile, the spectacular main stadium, used for the opening and closing ceremonies, has been tweaked, and is to become the new home of West Ham United Football Club.

“We had a very clear schedule, but we had to include the bottom line of legacy planning from the very start”, Altman said. “It could not be an afterthought; it had to be considered from the very beginning”.

As a consequence, 75 pence in every £1 spent on the entire project went to long-term projects. But the financial returns are not immediate, Altman pointed out.

“We had a lot of discussions with the British government and we explained that there would not be any immediate returns on the public money that was being spent for the Olympics”, he said. “The returns would be 20 or 30 years in the future, with an increase in residents to a part of the city that is now more attractive—and more tax revenue. Those things are only felt over time”.

And so it has proved. Property prices in the district immediately around the Olympic Park have soared 60% since 2005.

With not a great deal of time left until Tokyo 2020, and given the scale of the task at hand, Altman said organisers need to be devising specific plans for the footprint that will remain after the final curtain comes down.

Games may help develop Tokyo waterfront
The transport infrastructure required for the Tokyo 2020 Olympic and Paralympic Games is already largely in place—a legacy of the city having hosted the 1964 Games—so the impact of the event will be slightly different to that of London. That is according to Hiroo Ichikawa, professor of urban policy and planning at Meiji University and executive director of The Mori Memorial Foundation.

Yet four years before the eyes of the world are focused on Tokyo for the largest sporting event Japan is to host to date, little debate has taken place over what the legacy of the Games will be, he added.

“The legacy remains a very popular idea, but not many people have given a great deal of thought to what it should be yet”, Ichikawa told BCCJ ACUMEN. He is a member of the Tokyo Metropolitan Government’s Council for International Promotion, advising on the future shape of the city.

“In London, there was a dramatic change in the urban space and landscape of east London, with many improvements in the industry of the city and its facilities”, he added.

“But Japan is not yet at the point where we have started that discussion”, he said. “I hope those discussions will be held after the Rio de Janeiro Games later this year”.

Nevertheless, Ichikawa said the Games coming to town are an “excellent opportunity” to redevelop the Harumi waterfront district of the city. Largely derelict today, the artificial island east of Ginza will be the location of the athletes’ village, and subsequently be turned into private apartments.

Equally, he hopes the Games will have an impact on the green space in the city.

A gauge of just how far Tokyo has come as an international city will be the results of future rankings in the Global Power City Index, Ichikawa said.

“The index ranks a city according to Economy; Research and Development; Cultural Interaction; Liveability; Environment; and Accessibility”, he explained. “London overtook New York after the changes introduced for the 2012 Games, and has held on to that position ever since. Tokyo is currently officially in fourth place, but I believe it is already ahead of Paris in third place”, he added.

“I think that with improvements in accessibility and cultural interaction, Tokyo can climb to second place around the time of the Games, and that will be a strong legacy of the city’s urban policies”.

The silver medal, behind London’s gold, would still be an achievement of which to be proud, Ichikawa believes.

Mortgage considerations for non-Japanese in Japan

Tokyo in new bid to be Asia business capital

Residents and businesspeople of Nihombashi want to put their district back in the spotlight.