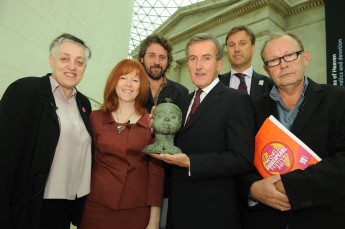 WSF organisers and sponsors at the British Museum in London.

The Ninagawa Company will join artists from more than 50 arts organisations around the world and take part in the UK’s World Shakespeare Festival (WSF), according to a 1 October press release.

According to the WSF, the event will be part of the London 2012 Festival, the culmination of the Cultural Olympiad, and run from April to November. Members of the Tokyo-based Ninagawa Company will be among thousands of artists in almost 70 productions, supporting events and exhibitions across the UK, at sites in London, Stratford-upon-Avon, Newcastle, Birmingham, Wales, Scotland—and even in some online sites.

The festival starts on Shakespeare’s birthday and is being supported by BP p.l.c. and the National Lottery. The event, which is part of the London 2012 Festival, will put “culture back up there with sport during next year’s Olympic Games in London”.