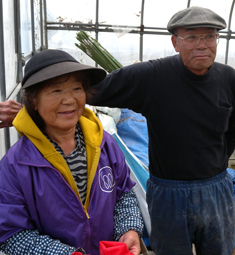 Members of the Green Farmers’ Association in Minamisanriku are working to revitalise the community’s agricultural sector.

How one NGO is revitalising quake-hit communities


Two years on from the Great East Japan Earthquake, the towns and villages laid waste by the triple disaster have been helped to their knees; now it is time for a final push that will get them back on their feet.

Jane Best, president and chief executive officer of Refugees International Japan (RIJ), believes the best way to do this is to provide people with the tools, skills and assistance to instil new life in communities that are still dominated by temporary housing units, desolate stretches of cleared land and limited employment opportunities.

It is a strategy that has proved to be effective in other communities around the world that have been affected by disasters, Best said.

“We support country projects that help people to get over their displacement and build sustainable communities once again”, Best told BCCJ ACUMEN. “We want to do the same in Tohoku, making the most of the very good experience that we have built from projects overseas.

“We want ownership of these projects to be in the hands of local people”, she added.

Two of RIJ’s projects in the region are showing particular promise, said Best, and are benefitting from some ¥12mn raised largely through the Kawachiya Kizuna Charity Project, in which online Scotch distributor Whisk-e Limited worked with six of its partner distillers in Scotland in 2011 to produce a special blended whisky.

The most successful scheme to date has been the creation of a website to promote the Chime of Hope Shopping Centre in Onagawa, Miyagi Prefecture.

The town, which before the disaster was home to more than 12,000 people, was one of the worst hit of all the communities in the north-east by the tsunami, with 85% of the population impacted.

A temporary shopping centre has been constructed in the grounds of the town’s high school and is named after one of the four bells that used to hang in the railway station. The station was completely destroyed in the disaster and only one of the bells has been recovered. It is now a symbol of the town’s determination to rebuild.

The Chime of Hope Shopping Centre—with 50 shops, three banks, a post office and a police box—has become a central part of the community and a way to boost the local economy and support the residents.

The RIJ-funded website has further helped to publicise the centre, which is expected to attract tourists and further investment in the district.

“This project has done better than we expected”, Best said. “By spreading out into the community, it has achieved what we had hoped.

When I last visited in November, I learnt that all the businesses in Onagawa were taking part, bringing the whole city together—and that is better than it was even before the earthquake.

“The shop owners in the centre are all very proud of the fact that they are now on blogs and Facebook”, she said. “They are much more confident and proud of what they have achieved, and that is having a very positive knock-on effect throughout the community”.

A second project that is taking route is the Green Farmers’ Association (GFA) in Minamisanriku, Miyagi Prefecture. The devastation wrought by the tsunami decimated the town’s fishing industry and sent the unemployment rate as high as 90%.

RIJ is working with the locally formed group O.G.A. for Aid to bring in volunteers and develop opportunities in the agricultural sector on plots of land that have not been used for many years.

The first year of the project posed many challenges, as the land needed to be cleared and the soil turned over to prepare for planting. However, the team overcame the challenges and was able to get a limited crop to market.

In 2012, the GFA became one of the largest local producers in the neighbourhood and employs six regular staff and a number of volunteers. The organisation has built links with the all-powerful Japan Agricultural Cooperatives Group, but is considering setting up their own cooperative in the long run.

Further assistance in the months and years ahead will enable the GFA to purchase a new tractor, a pest-repellent sprayer, and crates for storing and transporting produce. A logo for the organisation will also be designed, along with a website and blog to raise the GFA’s profile and promote its products.

“Now, we want to help them follow through and see them succeed. I really believe they will be self-sustaining within five years”, Best said.