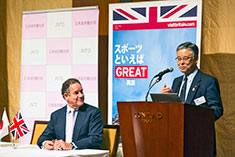 With an increase of 6% in visits and 13% in visitor spend, the last financial year was “quite simply the best year in the history of British tourism”, according to Christopher Rodrigues CBE.


But, the chairman of VisitBritain admits this outcome was only to be expected. The country had “the dream ticket”: improvement to the UK product; the ability to sell the UK brand through the GREAT Britain campaign; a succession of royal events; and, most important, the leverage of the 2012 London Olympic and Paralympic Games.

“For a nation that spent £9bn on the Games, it is encouraging that the promise of tourism has turned into the results of tourism”, Rodrigues said at a British Chamber of Commerce in Japan event on 26 September.

“Our [annual] visitor numbers are up 5mn from before the Games, and we estimate that there is at least an additional £1bn a year coming in from the direct impact of the Games”.

After such success, and with work well underway for Tokyo 2020, it is not surprising that Japan is looking in London’s direction. Now, following the signing of a Memorandum of Understanding (MoU) between VisitBritain and the Japan National Tourism Organization (JNTO), the UK is set to impart that experience and knowledge.

Speaking at the signing ceremony, Ryoichi Matsuyama, president of JNTO expressed his delight at what cooperation could bring, saying Tokyo 2020 is “an opportunity to transform Japan into a more tourism-orientated country”.

The MoU builds on increasing ties between the British and Japanese governments. In October 2013, the British Council and the Ministry of Education, Culture, Sports, Science and Technology signed an MoU on education, and in May, the governments signed a joint statement on Olympic and Paralympic cooperation.

Rodrigues said any British expertise would be passed on “willingly, warmly and with humility”, but was keen to quash the idea that Japan needs help with the mega tournaments.

“We’re not outsourcing Britain, we’re supporting Japan”, he told BCCJ ACUMEN. “Japanese people have very high standards. “This country knows how to do things exceptionally well. It is in the heart of the people”.

As 2014 marks 50 years since the last Olympic and Paralympic Games were held in Tokyo, Japan is looking back on lessons learned, as well as to the Games ahead. Rodrigues congratulated Tokyo on a successful 1964 Games, but said the country needs to “beat its personal best” to harness the digital age.

With the explosion of social media sites and rapid development of software over the past few years, it is clear that Tokyo 2020 will take place under very different conditions than those of London 2012, which some say were the first digital Games.

Rodrigues believes that Japan is ready for the challenge; indeed, its technological abilities may help the country to address any English language communication issues, for example through the use of translation software on smartphones.

He urged Japan to make the opening ceremony its own by celebrating the “wonderful things in Japan”, and said the UK might be of help in bringing its highly regarded creativity to the table.

The UK’s knowledge in building stadia and support infrastructure, as well as in providing specialist services, will also be of use, but most important will be its direct experience of delivering London 2012.

According to Rodrigues, Japan needs to consider the voice of the customer by understanding the gap between the reality of Japan and people’s perceptions of it—and how to narrow that gap.

“We don’t just want to make a positive contribution; we want to take a leadership role here in bringing the various parties together and ensuring people make an excellent contribution”, he said.

Despite VisitBritain’s success, Rodrigues warned the Games are not smooth sailing for tourism. They are a marathon that requires planning and preparation, as well as a national effort to showcase the country and engage the entire population, he explained.

The host nation also has to transmit a clear message regarding what the Games mean. For the UK, London 2012 was a way to address social issues, such as diversity and inclusion.

Rodrigues said the partners of JNTO need to work together to avoid a decline in visitors before the Games—London experienced a dip in business trade worth 40% of its tourism income—and urged the industry not to hike their prices during the Games lest they be criticised by the world’s press.

After the Games, tourism organisations will be in the enviable position of inviting an audience of 4–5bn worldwide to come and see first-hand what the broadcasters had shown them.

As tourism is the fifth-largest industry in the UK, accounting for 9% of total GDP, the UK government is all too aware of its importance.

Rodrigues hopes that the MoU will be just the start of a long and productive collaboration that will enable both countries to enjoy an increased flow of tourists, which currently stands at an annual figure of about 230,000.