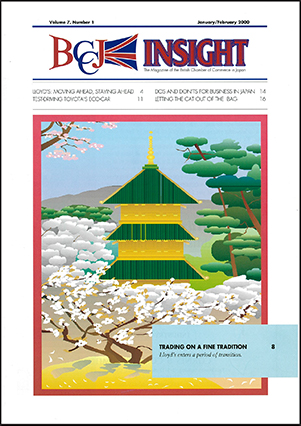 In BCCJ ACUMEN’s ongoing series of history articles marking the 70th anniversary of the British Chamber of Commerce in Japan (BCCJ), a key issue has been securing sources of information, as unfortunately much of the chamber’s archive has been lost over the years. But thankfully, Robin Maynard MBE, a BCCJ honorary individual member and formerly the Lloyd’s general representative in Japan and of Sedgwick Far East Ltd., kindly sent in two copies of the chamber’s magazine pre-BCCJ ACUMEN.

Dated November–December 1986 and January–February 2000, respectively, the issues offer a glimpse of changing bilateral ties and the wider business world.

A different world
One of the most notable shifts is the tone of the discussion around UK–Japan business and trade. Whereas today the focus is on partnership and mutually beneficial investment, much of the 1986 issue is concerned with barriers to doing business in Japan, although there are indications of the fruitful economic relationship that was to come.

For example, it includes an address by the late Paul Channon, then-secretary of state for trade and industry, to the chamber. In this he gave updates on the launch of the Uruguay Round, which would eventually lead to the establishment of the World Trade Organization, discussed UK–Japan trade imbalances and also found time to lament protectionist tendencies in the United States (sound familiar?).

“What is essential is the need to show real and substantial progress in opening and liberalising the market”, he said of the issues he would raise with the Japanese government.

Elsewhere, then-ambassador Sir Sydney Giffard KCMG set out in a speech to the Keidanren the basis of British foreign policy, before finishing with an extended appeal to the assembled business people to open Japan’s markets and consider buying British products.

“At first, you may also think that such matters are far removed from the grand considerations of foreign policy about which you kindly invited me to speak. But on reflection we see that they are not”, he said, noting these matters will shape the voting preferences of the worker in the UK. “What kind of world will he vote for? A small, protected world, or a large, open one?”

Paying respects
By contrast, the magazine issue from 2000—by this time titled Insight—focuses heavily on the work of Lloyd’s, featuring a speech from then-chairman Max Taylor to the BCCJ and an article looking at the insurer’s history in Japan, as well as the backgrounds of the outgoing general representative in Japan, Masahiro Yagiu OBE, and his replacement, Robin Maynard. Insofar as these articles address UK–Japan economic relations, it is in cautiously optimistic terms.

“Despite the scope for greater competition, the market penetration for foreign insurers remains very low, though this seems likely to change as competition increases”, the latter article states.

In addition to member news and a review of the new Toyota Prius (“hybrid cars like the Toyota Prius are likely to be the wave of the future”), the magazine offers 12 dos and don’ts for doing business in Japan. Among these are “personal posture is important”, “do not be afraid of silences” and “do pay self-evident respect to Japan’s extensive history, unique culture and enormous economic achievements”.

Sign of the times
Giving a sense of the changing times are the publications’ adverts. A publicity piece titled “PC Productivity” in Insight, for example, promises to “help readers become effective in their use of Personal Computers by focusing on time-saving tips and tricks”, in this case by explaining how to use the Categories feature in Outlook. And the late Ian de Stains OBE opens his editor’s letter in the same issue by saying, “Perhaps now we can finally forget about Y2K!”

Some things, however, haven’t changed. In a speech published in the 1986 magazine, Gregory Clark, then a professor at Sophia University, is quoted as saying, “The foreigner is well placed to make use of that vast, untapped Japanese resource—the intelligent and underemployed Japanese female”. Although unlikely to be framed in such terms today, the underlying issue continues to be relevant. 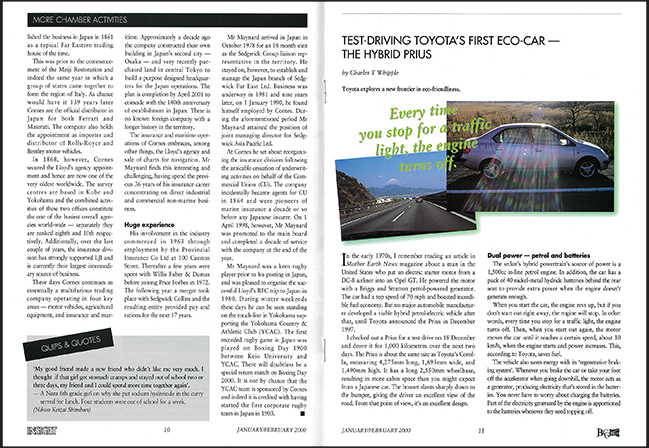