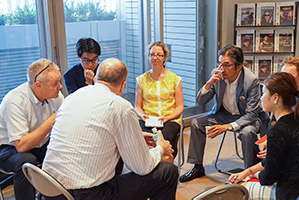 Discussion at the event centred on Japanese perceptions of the UK pre- and post-referendum.

It dominated the news and divided the nation. The referendum on the UK’s membership of the European Union, held on 23 June 2016, sealed the country’s fate as the Leave camp narrowly pulled in a higher percentage of the vote than the Remain voters.

At a recent event at the offices of the British Chamber of Commerce in Japan, Matt Burney, the director of the British Council in Japan, gave a talk in which he spoke about the results of two surveys carried out by the council across G20 countries. The poll looked at perceptions of the UK pre- and post-referendum, with a focus on Japan.

Explaining the motivation for the survey first, Burney said that “It is important for us to understand how the UK is perceived around the world. Particularly against the backdrop of shifting geo-political trends”.

“We thought it would be a good idea to carry out some perception studies, pre-referendum and post-referendum, to see how the UK’s image has changed since the referendum”, he said.

The study targeted 18- to 34-year-olds, with at least a secondary-school education, in all of the G20 nations. The reason for focusing on this demographic, Burney said, was that it represents “the future business leaders, they will be the future decision-makers, so it is very important that we understand what they think about the UK and other countries”.

The first survey was carried out in May and June of 2016, while the second took place in September and October 2016, with 1,000 people having been surveyed each time in Japan. 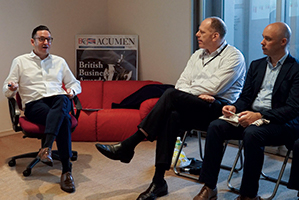 Matt Burney (left) said the intense media coverage around the referendum may have been a good thing.

Attractive countries
The first part of the survey Burney detailed was the general attractiveness of countries. Participants were asked to indicate how attractive they thought each G20 country to be. The poll respondents’ replies show that young Japanese people’s opinion of the UK was not quite as good following the referendum as it had been before.

While 54% of the respondents pre-referendum had found the UK to be attractive, the figure was 49% post-referendum.

An area where the referendum appears to have had little impact is studying abroad. The UK ranked as the third-most attractive study destination for Japanese respondents. The second poll showed a slight increase in the number of Japanese people wishing to study in the UK compared with the earlier one.

“Maybe this has got something to do with the sterling effect, because, of course, spending power was increased when sterling lost its value immediately after the referendum”, Burney said. “It allowed the Japanese to enjoy more spending power”.

Some areas saw an increase in views of the UK from Japanese respondents. When asked, “which three of the following countries do you find most attractive as a source of arts and culture?”, the UK ranked third after France and Italy. In the first survey, 32% of Japanese young people had opted for the UK, while in the second, the figure stood at 38%.

“I think the fact that there was so much coverage of the UK around the world during the referendum period [is good], and there were related images—many ironically had a positive effect. It impinged on people’s consciousness”, he added.

Engagement post-referendum
Delving further into the results of the second survey, a series of questions on engagement with the UK post-referendum saw the vast majority of respondents indicate it made no difference, or that they had no opinion. However, a small number did suggest they would be less likely to engage.

“The messages that we get from the business community in Japan is ‘this is going to be very difficult’”, Burney said.

Meanwhile, 60% of respondents said interact­ing with UK arts and culture and making personal contacts and friendships with British people would not be affected.

The survey looks at tourism, a sector which saw the UK come fifth in terms of desirable destinations for young Japanese people, after Italy, France, the United States and Australia. The results show a slight increase in the number of people choosing the UK compared with the pre-referendum survey.

Finally, poll participants from all countries were asked a series of questions regarding what they thought were the most important issues facing the world.

Both the Japanese and British respondents indicated that extremism, terrorism, armed conflict, poverty, migration, climate change and the environment were their top concerns, albeit not in the same order.

But the main takeaway from the surveys is that the Brexit referendum has not significantly harmed relations between Japan and the UK. While some areas have seen a loss of interest or loss of trust, others have seen an increase.

When asked specifically whether the referendum had had an impact on their perceptions of the UK, one third of the Japanese respondents replied in the negative.

So, the UK appears to come out the other side of the referendum relatively unscathed. As Burney said when summing up, “the positives and negatives balance each other out”.

However, with the UK scheduled to depart from the EU on 29 March, 2019, perhaps another survey after then might yield an interesting set of results. 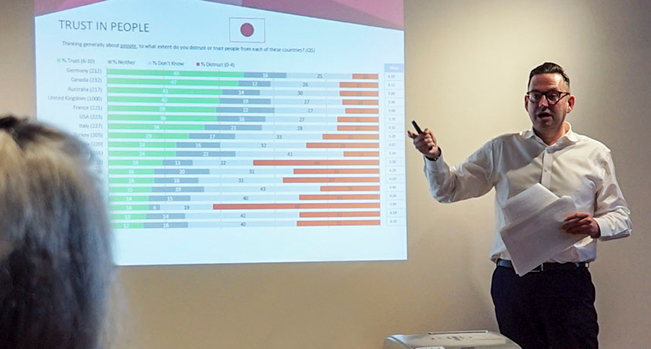 The survey showed only 33% of Japanese respondents said they trusted British people post-referendum.