It’s a pleasure to be back in Japan after an absence of seven years. Some things have changed: there are more joggers and signs in Chinese and Korean; and you now have to buy your salad dressing separately at Family Mart (yes, I’m writing this just after lunch). Some things haven’t changed, though: the cost of the basic fare on the Tokyo subway, for example, is a very visible manifestation of deflation. 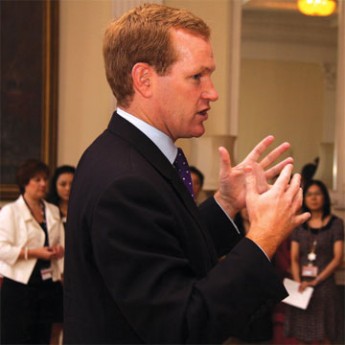 Jeremy Browne met staff at the British Embassy Tokyo in September and later paid special tribute to the BCCJ.

But either way, it’s an absolute privilege to be here in my present capacity and to have the opportunity to work with the British Chamber of Commerce in Japan.

So far I’ve attended three meetings of the BCCJ Executive Committee (Excom) and have been bowled over by the sheer amount of time, energy and thought Excom members invest in the Chamber and its activities. Sometimes I wonder how they manage to fit in their day jobs. They all do the members proud.

When Jeremy Browne, the Minister of State at the British Foreign & Commonwealth Office (FCO), visited Japan in September, he paid special tribute to the Chamber for the very thoughtful and balanced briefing he received from a selection of the members, so your reputation is well established in London, too.

It is not often that you get a sense of being in the right place at the right time, but that’s exactly how I feel about this job. A couple of weeks before I arrived, Foreign Secretary William Hague gave a speech in Tokyo setting out his vision of an enhanced relationship with Japan, and of a foreign policy that puts promotion of British economic interests at its heart. I couldn’t have asked for a stronger endorsement of the UK Trade & Investment (UKTI) team’s important role in Tokyo and Osaka.

At the same time, there are clearly limits to the commercial benefits government can deliver by itself. It can create the right environment for business: the new coalition government’s spending round decisions signal its recognition of this role by honouring planned reductions in corporation tax and protecting spending on areas important to growth — science and research, education and infrastructure.

We are keen to pool views, ideas and insights and find ways in which we can work together for the benefit of the UK and UK-Japan relations.

Likewise, we at UKTI can signpost the opportunities in Japan for British firms and help them identify partners and customers, or define their business strategy — last year we helped 1,300 firms in this way.

But ultimately, whether or not businesses succeed depends on their own product or service, as well as their own hard work and investment. You are the ones at the sharp end in deciding how to respond when exchange rates move or technology advances. The work of the Embassy and Consulate-General is only meaningful if it supports you and firms coming fresh to the market in managing those challenges.

So, for example, the British government’s approach to the proposed Economic Integration Agreement between the EU and Japan needs to focus on the areas that matter most to you.

The Embassy’s thinking on political and economic priorities and our advice to government departments in London need to take account of the implications for British business in Japan. Moreover, our work with the Japanese media needs to provide a positive backdrop for your own marketing initiatives.

Someone once said the scariest words in English are: “I’m from the British government; how can I help you?” At the risk of provoking that reaction, I’d like to say that I’m looking forward to thickening up relations between the Chamber and the Embassy and to finding out what we can do to back up your efforts. It could be almost anything, including taking up your market access and regulatory headaches with Japanese ministries, identifying some useful contacts for you at firms here, or offering the use of our facilities at the Embassy for you to host a product launch or a reception. If there’s ever anything with which you think we could help, do get in touch, either with me or with one of the UKTI team.

In his recent speech at the Lord Mayor’s Banquet, Prime Minister David Cameron talked about the “buccaneering spirit of our expatriate community”. I don’t think he meant that we were all pirates terrorising the high seas (although if there are any Johnny Depp look-alikes out there, could you please make yourself known?). I believe he meant that expatriates are bold, enterprising people, who make a crucial contribution to UK interests in a networked world. As he said, the “instinct to be self-confident and active well beyond our shores is in our DNA”.

I’m sure there is scope for us to harness that confidence and activism more proactively in pursuing wider British interests in Japan. As a small step in that direction, UKTI is working with the Chamber to set up a regular series of discussion sessions on the whole range of issues we’re working on here at the Embassy, from Japanese politics and foreign policy to energy and environmental policy, as well as Japan’s science and research base.

We are keen to pool views, ideas and insights and find ways in which we can work together for the benefit of the UK and UK-Japan relations.

To quote Mr Cameron once more: “When it is harder than ever for this country to earn a living, we need to mobilise all the resources we can” — and goodness knows, we’ve plenty of them to draw on here. I look forward to working with you all.