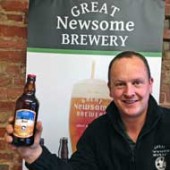 Matthew Hodgson is the director of the family-run brewery.

Great Newsome Brewery’s Frothingham Best took the top spot in the under 5% category at the World Beer Awards, beating out rival brews from Japan and other nations, The Daily Mail reported on 9 October.

Six hundred beers from 30 countries were entered in the competition, but the bitter dark amber Frothingham Best won over the judges.