The election for the governor of Tokyo, with the sheer size of its population and economy, is never a small matter. But, when the capital went to the polls last year, the stakes were higher than ever. Not only would the person being elected be in charge of preparing for the Tokyo 2020 Olympic and Paralympic Games—an event already beset by budgetary and other issues—but on the ballot was Yuriko Koike, a former defence and environment minister who would be the city’s first-ever female governor if elected. 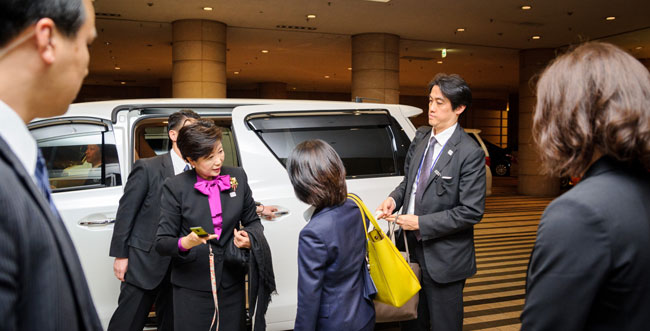 That Koike succeeded with a crushing 44.49% of the vote is significant in itself, but even more so given she ran as an independent against her party’s approval, and faced a debate around the election that was at times sexist. And decisions she has made since taking up her post, such as delaying the move of the famous Tsukiji fish market, have further burnished her status as someone who is shaking up Japan’s political scene.


She has also been vocal about the need to empower women, and has spoken at events such as the Global Summit of Women, which was held in Tokyo on 11–13 May.

It was with much anticipation then that Koike, who was named in April on Time magazine’s “The 100 Most Influential People” list along with UK Prime Minister Theresa May, was invited to speak with British Chamber of Commerce in Japan (BCCJ) Interim Executive Director Emma Hickinbotham, as part of an interview at the Grand Hyatt Tokyo on 6 April.

Koike spoke briefly with Emma Hickinbotham and David Bickle before her appearance at the event.

Key issues
Topics that have already become defining issues of Koike’s governorship were discussed. With the Tokyo Games only just over three years away, the conversation began there, with Hickinbotham asking what the legacy of the Games would be.

Koike started by noting that, even today, the legacy of the 1964 Olympic and Paralympic Games remains, and includes such infrastructure as the shinkansen high-speed bullet trains and part of Tokyo’s Shuto motorway network. But while 1964 heralded a new vision of modernisation for the nation, the legacy this time around will be quite different.

“In 2025, the population will peak in Tokyo, and the second holding of the Games here is going to serve as a model for how ageing societies can deal with ageing as advanced economies, so that’s one opportunity that we see in 2020”, she said.

Since achieving a work–life balance is one of Koike’s flagship policies, Hickinbotham asked what might be done to ensure that it is a priority for businesses.

“Because the way we work and the places we work are very important factors in our lifestyles, we hear a lot of talk about government measures [to address this issue]. But budgets are often very low for this type of policy”, Koike said. “There has been very little actual implementation of that work and life balance”.

But in the case of the Tokyo Metropolitan Government (TMG), lights are now switched off at 8pm to encourage workers to leave. In addition, opportunities for remote working are being explored.

“We want to be able to show what kind of activities a firm or an employer can conduct”, Koike said.

But to achieve a work–life balance—or life–work balance as Koike prefers to call it—and ensure people aren’t overworking, change needs to come from the top.

“In life–work balance, the particular managers—the general managers, the executives—need to go home first, and that’s something we’re trying to encourage”, said Koike.

“People stay even if they have nothing to do, that’s the problem. They just think that longer is better, and that’s more work done. It’s like thinking you’re a good salesman if you are wearing a tie. It’s the same fallacy”.

With such a monumental task on her hands, Koike was asked what her motivation was to run for governor.

“We have to get Japan from a situation of consensus to a more decision-making mode; that’s important for Japan”, she said. “If it takes 30 years to make a decision, the whole world has left us behind by the time we finally make the decision.

“As Tokyo governor I think I have opportunities to promote the items [on our agenda]. That is the reason I wanted to become governor.

“I feel like we’ve had a lot of frustration as citizens of Tokyo—I want to represent Tokyo citizens by helping respond better to what they want”, she explained. She added that, since coming to power, she has tried to create greater efficiency by switching to paperless meetings, and is attempting to tackle the issue of Olympic venues becoming white elephants.

Hickinbotham concluded by asking Koike what she would like her legacy to be.

“First off, that the 2020 Olympics and Paralympics were successful”, she said. “Next, that due to the Koike administration, things got better in Tokyo—there was more transparency, things were done in a way that people can accept as Tokyo citizens”. 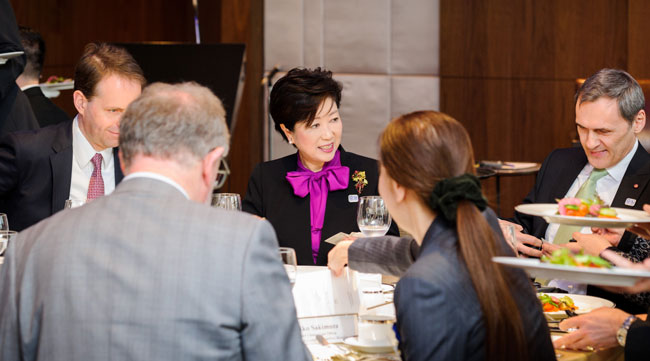 Female empowerment
Following the conversation with Hickinbotham, questions were turned over to the floor.

In light of Japan’s declining workforce, it was pointed out by a questioner that this presents women with opportunities, but that a lack of childcare facilities is a barrier preventing them from taking advantage of the chances open to them. What would Koike do to enhance the number of these facilities?

“I want to help reduce at least some of that pressure, and by 2020 we want to make it so that we can host 70,000 children in our daycare facilities”, Koike said. “We have to find locations for these daycare facilities. One of the things that we’ve done is make it possible for Tokyo-administered parks to be used, for some of the structures in a particular park to be used as a daycare facility, to avoid the problem of obtaining land.

“In addition, we want to encourage the use of Hello Work employment services, as well as maternity leave and paternity leave, making sure that those systems are used. We want men to help raise children as well”.

Koike began by noting that, despite various government campaigns, Japan has fallen in gender equality rankings (the country was 111th out of 144 countries in the World Economic Forum’s The Global Gender Gap Index 2016, down from 101 in 2015).

“It’s not that Japan has become worse”, Koike explained, “as much as that other countries have become better at utilising great female human resources. They realise that it’s better for them.

“In Tokyo, we want to make it so that women can work as executives; so that women are able to realise the great potential that they may have been saving up”.

How will you make sure that the Paralympics is a catalyst for change?
Without a successful Paralympics, we cannot have a successful Olympics in 2020. We have a message that we want to communicate to the world, namely, that we have a city where everybody can participate in sports and enjoy sports, and where the environment is safe for people to do so.

As the most aged of economies, we will have the chance to show how we can accommodate and help [people with disabilities] to participate in society.

Specifically, we especially want to eliminate steps and differences in height that create barriers for wheelchairs. I aim to make the Tokyo Metro barrier free, and buses are being converted to provide step-free access.

What can be done about increasing the female participation rate in the workforce?
The Tokyo Metropolitan Government (TMG) has 170,000 employees … The proportion of female employees is at 40% or higher now, and so that’s a good mark at this point. Those who are section chiefs are at 30% and those who are in upper management is up to 20%.

So, with other organisations, corporations, if you look at the scales of [female participation at] each of those, I think that TMG has a lot of potential with those proportions of females in those positions.

Regardless of gender, if someone is capable they have the chance to fulfil important roles; and in the future we will have a higher rate of women participating in upper management at TMG.

You have been called Japan’s “Iron Lady” and I’ve heard about your reported admiration for former UK Prime Minister Margaret Thatcher. Can you tell us more about that and other people that have influenced your career?
I don’t consider myself an iron lady—I am a silk lady perhaps instead. Right now you have Prime Minister May who is fulfilling a great role in her government. There are also other great female leaders throughout the world and there are a great many things to learn from each of them.

I think more than a person’s gender, what they do and what they are about is important.