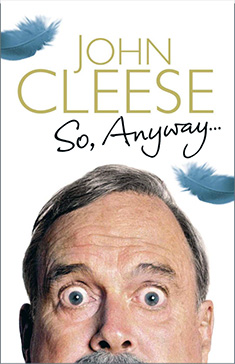 Exploring the work of a talented comedian

John Cleese, having secured by the skin of his teeth a degree from the University of Cambridge, was set for a career as a solicitor.

A secure offer of a job (at £12 a week) with a well-known law firm in London was firmly gazumped at the last minute by an offer from BBC Light Entertainment to become a writer at the princely sum of £30 a week. As Cleese himself says, the decision was “a no-brainer”.

This less-than-orthodox start to his career appears to have set the pattern that was to follow Cleese. He found a certain success in the Smokers—informal productions of the university’s Footlights Dramatic Club—and their London West End and Broadway spin-offs.

Capitalising on that success, Cleese appeared successfully off Broadway and then, famously, on television.

This was largely at the initiation, and with the support, of the late Sir David Frost OBE. Frost’s comedy programme That Was the Week That Was revolutionised late-night television in the UK and triggered a new age of satire.

While Cleese doesn’t quite say as much, it is fairly clear that, had the show not existed, his comedy group Monty Python could not have been conceived or would, at best, have been stillborn.

Cleese tells his story effortlessly and pays generous attention to the friends and colleagues who along the way influenced, encouraged and taught him. Refreshingly free of the artificially sensitive “luvvie” approach of many showbiz autobiographies, this volume is also short on malice.

The reader is left with an impression of the well-brought up young man who adhered to his father’s definition of gentlemanly behaviour.

There is little doubt, too, of Cleese’s awareness of how class differences played into his early life. It is indeed hard not to feel that he has never quite escaped the sharp edges of that influence. His unresolved relationship with his mother is also something he explores.

When Cleese is not trying to be funny—which he very often is—he offers some truly deep insights into a range of human behaviours, no doubt in part a consequence of the many periods of therapy he has undergone (and about which he is refreshingly frank).

His utter outrage at the gross injustice of being caned in school for getting an answer wrong is expressed with such clarity that it provoked in me chilling memories of the long-forgotten indignity I had felt at the hands of my primary school head teacher who, like Cleese’s teacher, also taught mathematics.

An odious and odiferous toad who chain-smoked—his study was a constant blue fug—he delighted in mocking my “foreign” name and having me stand before the class while assailing me with problems of mental arithmetic that he knew full well I was not up to answering.

In so doing, he delighted my classmates whom he encouraged to enjoy my squirming (and, incidentally, ensured that the subject would be forever a no-man’s land to me).

Although there is not a hint of the broken-hearted clown cliché in Cleese’s memoire, the reader is nevertheless left with the impression that there is a dark—even disturbing—side to this immensely talented writer and comedian.

When all is done it is difficult for the reader to judge whether or not he has reached his three-score and 15 years a happy man.

Nevertheless, to play amateur analyst (as he himself sometimes does) it is tempting to suggest that a lack of that same darkness would have rendered impossible Basil Fawlty, his lead character from British sitcom Fawlty Towers.

What ultimately makes Basil funny is the suppressed anger that is forever threatening to explode; if he ever truly gave into a tantrum the humour would be lost. It is the repression, and Basil’s efforts at it, that make us laugh.

It may be a leap too far to suggest that Cleese is an angry man. But given his uncertainties and self-doubts, as well as his occasional questioning of his self-esteem, the hope must be that he realises how much pleasure he has given to so many who enjoy his talent. This book is a suitable record.