The Chinese came over the hillsides “like ants”, said Ben Whitchurch, who also recalled wishing, as a private in the spring of 1951, that he had been armed with something that had a faster rate of fire than an Enfield rifle. 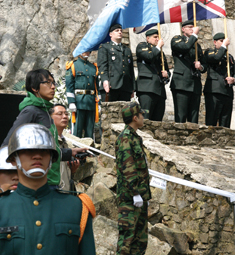 But the Gloucestershire Regiment had been ordered to stand its ground, and the three-day delaying action on the Imjin River blunted the largest assault of the entire Korean War.

Although talks dragged on until the armistice was signed in July 1953, the war was over for Whitchurch and several hundred troops of the 29th Infantry Brigade. The unit lost 1,091 men killed, missing or captured—nearly one-quarter of its entire strength—and Whitchurch plus 521 colleagues were marched into captivity.

Standing close to the foxhole from where he had watched the Chinese advance six decades ago, 79-year-old Whitchurch and 80 British veterans paid their respects on 23 March to the men of the regiment—since known as “The Glorious Glosters”—and all the soldiers who died in the battle.

“We had seen some skirmishes earlier in the day, but then suddenly they were coming over the hills like ants”, Whitchurch told ACUMEN at the commemoration service. “At the start of the battle, I had two bandoliers around me with about 100 rounds, but they only lasted the first day”. 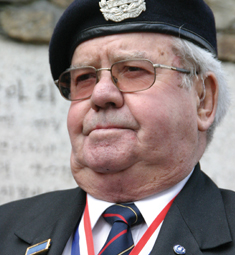 The Chinese had forded the river both to the east and west of Hill 235—now known as Gloster Hill—and engaged The Royal Northumberland Fusiliers and The Royal Ulster Rifles. Further support came from the Royal Artillery and Centurion tanks of the 8th Hussars, but the 8,000 men who were part of the United Nations force defending South Korea were outnumbered four-to-one by the Chinese and the hill was quickly surrounded.

There were no rations or water and limited medical supplies, so when a US attempt to take the position failed, the survivors realised the end was inevitable.

Ordered to break out and return to allied lines, Whitchurch was in a group that was ambushed. But even worse was to come.

“They herded us down to a road and made us kneel down with our hands behind out heads, execution-style, and I thought we were going to die”, he said. “We had seen Chinese dead in piles, 10ft [3m] high, alongside the road and I thought they were sure to kill us”, said Whitchurch, from Bristol.

Instead, they were relieved of their personal possessions and began a six-week forced march, burying those who died of their wounds alongside the road that ended in a prison camp north of Pyongyang.

Whitchurch endured attempts to brainwash him, temperatures of minus 40 degrees in the winter, strafing by US Air Force fighters and a diet of “rice, rice and more rice”, he said. But the worst thing was not knowing how the war was going and not being able to contact his family.

Standing in the shadow of the hill today, however, Whitchurch said he would do it again.

“There was a sense of excitement and it was just an adventure, especially at the beginning, but we’d all go through it again”. 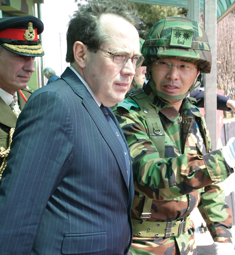 Two officers of the regiment received the Victoria Cross for valour and military historians believe that, had the position not been held, the Chinese would have recaptured Seoul and turned the war decisively in their favour.

The commemoration service opened with the veterans marching over Gloster Bridge. A colour party marched in the flags of the UN, South Korea and the UK before a message from South Korean President Lee Myung-Bak was read out.

“The sacrifices of the heroes and other veterans have enabled the Republic of Korea to build a country full of freedom and prosperity in just two generations”, Lee said. “Their death was truly an honourable and noble death”.

Peter Luff, UK minister for defence equipment, support and technology, then gave a speech in which he praised the men “who had served with distinction in Korea”.

“What took place here is the signature event of the Korean War and the achievements of the Gloucestershire Regiment and all the others who fought on the Imjin River almost defies belief”, he said.