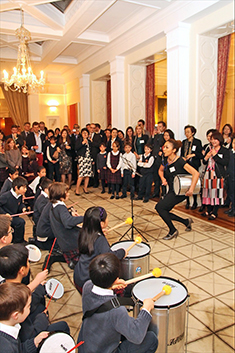 The celebrations to mark the 25th anniversary of the opening of the British School in Tokyo (BST) went with a bang—quite literally—at the British Embassy Tokyo on 19 March, with students showing off their prowess in the sciences, debating, technology, music and singing.

And while the occasion was primarily to congratulate the school for providing a British education to thousands of pupils over a quarter of a century, it also served as an opportunity to recognise the work of British firms across Japan and the commitment they and their staff have made to this country.

“Three years since the terrible triple disaster of 11 March 2011, it is a good moment to reflect on what the word ‘community’ means”, British Ambassador Tim Hitchens said in his welcoming address, after guests had arrived to a spirited version of The Beatles’ “All you need is love” from the school choir.

“In the immediate aftermath of the March 11 disaster, members of the British community, like so many others, came together to support each other and to support their Japanese and other friends.

“Those were difficult times, but the British community turned out to be pretty resilient. Far less British residents left Tokyo than most other foreign communities. Perhaps it was down to Sir John Beddington’s science-based advice, or the famous British ‘stiff upper lip’, or simply the commitment of the British to Japan.

“Whatever it was, many Japanese people and organisations have thanked us for it”, Hitchens said. “It has left a lasting impression”.

The ambassador then paid tribute to the 450 British firms with a presence in Japan.

He also singled out the British Chamber of Commerce in Japan for “providing a dynamic network which supports the British community and multiplies our joint impact in Japan”, as well as all the charity work and volunteering that goes on among our numbers.

“We helped and supported each other and I think that’s a unique feature of our community here”, Stewart said. “We couldn’t just get up and leave; that’s not in the British psyche”.

BST plays a hugely important role in the community here and, as education is a key concern for parents considering a posting to Tokyo, remains one of the reasons for the strong British business presence in the city.

Principal Brian Christian said, “It would be very difficult for British firms to send their best people overseas if they did not feel there was a good school for their children to attend”.

Set up in December 1988 as a charitable trust, BST was officially opened by the then prime minister, Lady Margaret Thatcher, the following year, and still occupies the same site in Shibuya. It has since added a second campus.

The school’s 800 students are drawn from 58 nationalities. Many of these young people were keen to demonstrate what they have been learning.

One group of pupils demonstrated the capabilities of the Raspberry Pi low-powered computer, which runs a free, open-source operating system and is designed to provide low-cost computing applications.

Students have been using the system to carry out their own programming projects, such as making a film using time-lapse photographs of the school’s most recent ski trip.

“We are aiming to promote the study of computer science and related topics, and really to put the fun back into computing”, said science technician Ryan van Loh.

The pupils of the school’s Programming Club are equally enthusiastic about their project, creating their own version of the Visit UK website using eye-catching images and messages.

“Usually the children are more interested in playing games on their computers, but we have been able to show them how those games are actually made and how much effort goes into them, and that has really made them more interested in learning the skills required to do their own programming”, said Nino Popa, the school’s data manager and web master. 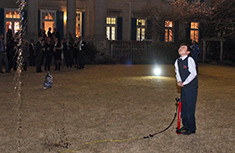 The Rocket Club is one of the school’s most popular activities.

The students’ showpiece demonstration took place on the ambassador’s lawn. It required the embassy to warn the neighbouring fire station and local police that sparks were going to fly.

The Rocket Club is one of the school’s most popular, with science teacher Tom Harris using homemade, air-powered water rockets to teach the fundamentals of physics.

“They work on the same principle as the Space Shuttle and apply Newton’s principles. We’re trying to use the club to create a different way of learning because space is such a major industry in the UK”, Harris said. “It’s great to be able to use this to inspire young people about their futures, as well as having a lot of fun in the process”.

A dozen or more of the club members’ rockets were launched into the night sky, some with lights attached to them so their trajectories could be followed.

“This is the first night launch we have tried and I’m excited about that”, said 11-year-old Charlie Wiggins. “We can’t fire them as high as we know they can go here, but if we used full power we could get them up to about five stories high”.

Wiggins, who said he wants to be a scientist or “pyrotechnics expert” in the future, confirmed that the rocketeers were being careful to avoid going through the ambassador’s bedroom window with one of their projectiles.

Fellow rocket fan Ian Wang said, “The best bit is when we do succeed in launching them and they fly in the direction we want them to go”.