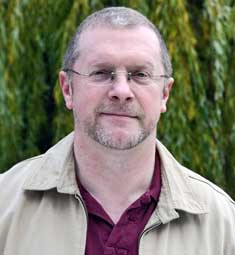 A British humanitarian aid professional has completed a 126km stretch of the Nakasendo Way, linking Kyoto and Tokyo, to raise funds for RedR UK, a charity that provides training and support around the world for aid workers and organisations involved in disaster relief.

The hike was part of the official Japan400 celebrations, but was also one of 56-year-old Skingle’s long-standing ambitions.

“In the mid- to late-1970s, I became involved in judo while serving in the army, eventually going on to set up a club for, and coaching, the kids on the base and becoming a judo official”, Skingle told BCCJ ACUMEN.

Skingle, who did a stint as a child soprano at the Royal Opera House in London, paid his first visit to Japan in 1987. He attended a kabuki performance and was immediately hooked, he said.

He fitted his hobby of researching and collecting historical kabuki memorabilia around his work with RedR UK, and was on duty shortly after the March 2011 earthquake and tsunami struck the Tohoku region.

As a trained humanitarian disaster relief logistician and an experienced IT professional, Skingle found a portal run by the online disaster relief community and was able to help by translating SMS texts sent by Japanese who had been stranded by the disaster.

Skingle had initially planned to undertake a section of the 533km Nakasendo walk in 2007, but the plan had to be put on the backburner. His desire to complete the trek remained, however, and the Japan400 celebrations presented an ideal opportunity to resurrect the project.

“I was interested in the Bakumatsu period, leading up to the Meiji Restoration (1868), and found and read Shimazaki Toson’s historical novel, Before the Dawn. It covers activity along the Kiso section of the Nakasendo during that period”, he said.

The Nakasendo existed in the seventh century, but only became one of the official travel routes shortly after Tokugawa Ieyasu’s victory at the Battle of Sekigahara in October 1600.

The path was considered safer than the Tokaido road, which was often affected by river flooding. It was also considered important in controlling the supply of wood from Kiso Valley.

Hiking with tour operator Walk Japan (see page 35), Skingle said the experience was “a real pleasure” once the weather turned more autumnal, although the hike did present some interesting challenges.

“There were some passes that were very hard work, one 2.5km ascent and a couple of 1.5km ascents”, he said. “The most memorable section was the one between Ena and Shinchaya, mainly because I recalled the route to the Shinchaya section from Toson’s book and was excited about walking through such an important part of Japanese history. I wasn’t disappointed”.

“At the top of the old section was a memorial stone on which was inscribed ‘From here the Kiso road lies entirely in the mountains’, a quote from Toson’s book”, he said.

Skingle has raised money to support the activities of RedR UK through a fundraising page set up with Virgin Money Giving, the charitable arm of Virgin Group Ltd.

With the Nakasendo walk completed, Skingle is looking forward to his next visit to Japan in December.

He has rented a small house near Kyoto’s Gion district for three weeks, and plans to continue exploring Kyoto and its surroundings, along with improving his Japanese conversation skills and seeing some renowned kabuki performances at the Minami-za theatre.