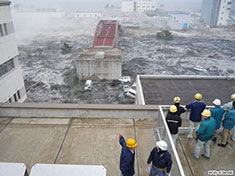 Residents watch the effect of the tsunami on 11 March, 2011.

When Doug Hurcombe and Geoff Trodd set out to make a documentary about the aftermath of the Great East Japan Earthquake and tsunami through the prism of professional football club Vegalta Sendai, they anticipated a fairytale story of a small town team overcoming great adversity to succeed. They got a great deal more.

One of the co-directors of GPO Films, Hurcombe told BCCJ ACUMEN that he was in Britain when the disaster occurred, and “watched in stunned silence as the pictures unfolded on the news”.

His wife Kaoru phoned loved ones in Japan to confirm they were safe, but could not contact friends in Sendai City, Miyagi Prefecture, as communication links had been destroyed.

It took more than one week to contact their friends there, and Hurcombe admits that, at one point, they had feared the worst. However, not only were the friends alive, but they insisted on going ahead with plans they had made to take a holiday in Britain.

As big fans of Vegalta Sendai, they wanted to watch a football match in the UK during their stay. Hurcombe got them tickets to a game between Ipswich Town and Middlesbrough.

Unbeknownst to Hurcombe and his Japanese friends, an Ipswich supporter had contacted the club and informed officials that survivors of the 2011 disaster would be in the crowd that evening.

“This effectively left our friends as surprise ‘guests of honour’ that night: something that absolutely knocked them out”, Hurcombe said. “There wasn’t a dry eye in the house as the full effect of the last couple of weeks really sunk in with them, and they felt this wave of support from football fans half-way across the globe.

“It made me think about the global brotherhood of football fans and wonder how the message of Vegalta had made its way across the world so quickly”. 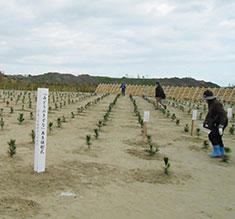 Hurcombe began to follow the Japanese team’s progress up the J-League. Their success included an impressive debut season that saw them qualify for the AFC Champions League and cement their reputation as one of the top teams in the country. What is more, he found the support of their fans was nothing short of remarkable.

“As we’ve got more involved in the story however, we’ve realised how much deeper it goes: how much the hope the club has offered has meant to the people there, and how hard the fans have worked to help their community”, he said.

“This is so much more than a film about football now; it’s a film about determined, brave people and the battle they have faced to rebuild their lives”.

After raising funds to create the film, titled “Football, Take Me Home”, Hurcombe and the camera team arrived in Sendai in the summer of 2012 to start filming. Even 18 months after the tragedy, he said that seeing the disaster zone for the first time left an “indelible impression”.

“The sheer scale was absolutely horrific and something you could never adequately visualise or explain to people”, he said.

With the help of local volunteers and the blessing of the football club, Hurcombe set about making the movie.

“The fans, though, were the real revelation”, he said. “They were wary of the media as they had received some bad press in the past and hadn’t allowed any filming from within their ranks”.

However, after a couple of trips, the film-makers were invited to a get-together, and informed, after great discussion, that the fans had decided to allow them access and would support them in anything they wanted to do.

“The actuality was they went way beyond anything we could have hoped for and were pivotal in the making of the film”, Hurcombe said.

“Their level of support for the community and understanding of the nature of the struggles of the region transcended just about anything I have ever seen—certainly in terms of sport.

“And it was incredible to watch them in action: raising money, supporting football in the community and helping with youth projects”, he added. “That was aside from watching them in the stadium, which was an experience—as a football fan—I’ll never forget”.

While admitting that “film-types can be notoriously self-centred and live in an indulged bubble”, Hurcombe is sure that the project changed everyone who was involved.

“Living with the people of the region and being treated with such generosity by people who have lost so much has been both humbling and heartbreaking”, he said. “The crew have worked tirelessly, pushing on and on beyond normal accepted endurance, as they believe in the story we are telling.

“We have all regarded it as a privilege to have seen what we have seen and to share the tears and happiness of a great people”, he added. “We only hope now to do it all justice on screen”.

The aim is to have the 90-minute film—not by coincidence running the same length as a football match—completed in the next few months, which will be followed by a series of screenings. It will then be entered in film festivals, such as the Toronto, Berlin, Sundance and Tokyo festivals, before going out on limited release and, eventually, onto television.

Asked the best part of the entire process, Hurcombe does not hesitate: “Seeing just how high the high points are for people that have suffered so much.

“They celebrate even the smallest victory with a joy and vivacity we’ve lost in our jaded consumer world”, he said. “From a victory in a football match to a woman in temporary housing finding long-lost wedding photographs that have been recovered from the ruins and cleaned by volunteers, the joy was the same: tinged with slight sadness, but full of optimism.

“These really are among some of the most beautiful people on earth”.