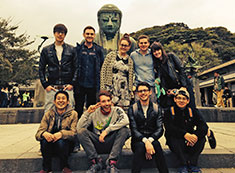 Screaming Maldini at Kamakura in June.

Sheffield pop ensemble Screaming Maldini are making waves in the Japanese music scene, The Star reported on 29 May.

The quirky group, which features a range of instruments and a six-part harmony, has just returned to the UK from a successful tour of Japan.

Frontman Nick Cox said he believed their success is thanks to Japanese fans’s appreciation of the crazy aspect of their music. Recent singles, “The Awakening” and “The Extraordinary” have appeared in Tokio Hot 100, the official music chart programme of J-Wave radio station. The latest release is accompanied by a video of the band’s Japanese adventures.