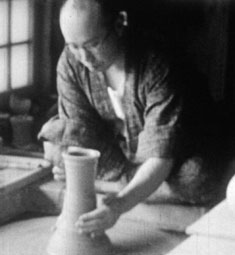 More than 100 years ago, an Englishman travelled to Japan intending to teach Western printmaking techniques. A wanderer in many ways, Bernard Leach (1887–1979) was constantly searching for new truths in cultures apart from his own.

In 1911, his life took a dramatic turn, when he was invited to his first “raku party”. These gatherings focused on the creation of raku, a form of Japanese pottery fired using low temperatures.

“By this to me a miracle, I was carried away to a new world. Enthralled, I was on the spot seized with the desire to take up the craft”, Leach wrote.

Fifteen years later, Leach, along with artist-craftsman Shoji Hamada and philosopher Soetsu Yanagi, founded the Mingei Movement. The influence of this approach to craftsmanship would forever change the world of ceramics.

BCCJ ACUMEN caught up with Marty Gross, a Canadian filmmaker who has collected footage documenting Leach’s life and work, and his path to becoming a forefather of what is now described as the Studio Pottery Movement.

Over the course of his career, Gross was fortunate to meet and interview Leach, along with others who were instrumental in the evolution of ceramic artistry.

He is now compiling a DVD box set with five hours of films, essays on the footage and transcripts of new and archival interviews concerning Leach and the profound impact of the Mingei Movement.

The Mingei philosophy evolved against the background of industrialisation. Before factories began churning out everyday objects, potters were creating bowls, vases and other goods to satisfy the needs of their communities.

Finding beauty in everyday objects is at the core of the movement.

Roughly translated as “art of the people”, the term mingei is used to describe folk art made by anonymous craftspersons who produce what can be perceived as extraordinary works. In contrast to much of modern pottery, form emerged from function, and prices as well as superfluous elements were minimal.

Mingei is considered a true East-meets-West movement, as the aesthetic values inherent in the Japanese style merged with modern techniques honed in Western nations.

When Leach stumbled on Japanese pottery, he was fortunate to gain the confidence of several people who contributed to the cultivation of the Mingei philosophy.

The Shirakaba Group included intellects and artisans in Japan who were actively introducing contemporary European artistic trends to the nation. Leach was welcomed into the fold as the first foreign artist.

“The Shirakaba Group members met as students of Tokyo’s prestigious Gakushuin, or Peers School, where DT Suzuki was an English teacher for several years. Suzuki was the world’s most important exponent of Japanese Buddhist thinking. His influence on Soetsu Yanagi provided a vital thread in the evolution of the Mingei ideas. Leach was the key foreign inheritor and exponent of this thinking”, Gross said.

Yanagi is often credited as the central thinker of the Mingei Movement, and was a prolific author. His essays on Buddhist concepts of beauty eloquently describe the ideas behind the movement. A lifelong friend of Leach, Yanagi introduced the potter to Buddhist aesthetics.

The objects he admired in pottery villages were created using only materials available from local sources. Every area had its particular natural resources, each of these possessing special qualities and limitations.

Mashiko, in Tochigi Prefecture, is an area made famous for its pottery in large part due to the exceptional quality of its clay. The town was also chosen in 1930 as the site of Shoji Hamada’s workshop.

Hamada, who during his life was designated a Living National Treasure, became an enduring comrade and colleague of Leach’s after their first meeting.

He returned with his friend to England in 1920, and together they set up a pottery in St Ives, Cornwall. Today, the Leach Pottery still stands on the original site, and contains both exhibition and working spaces for visitors and artists.

Although Hamada has been described as Leach’s soulmate, they were men of different temperaments.

While Leach “was a great talker, writer and teacher in addition to being an important craftsman and artist”, Gross said, “Hamada was a man of few words”. Despite being well travelled, the Japan-born potter preferred working to speaking or writing.

Leach and Hamada’s relationship serves as a microcosm of how the Mingei Movement united East and West.

Leach introduced to Japan traditional English slipware techniques and the addition of handles—on cups and other vessels—which were completely foreign in rural communities. He also taught potters the European method of salt glazing, which Hamada “used to great effect”, according to Gross.

Heavily influenced by both Japanese and Korean rural pottery, Hamada possessed a strong scientific grasp of his materials and processes. Leach was inspired by the simple, natural beauty of Hamada’s work and excited by the craftsman’s brilliant use of traditional forms and techniques.

“Perhaps the strongest and most long-lasting of Leach’s contributions is the enduring impact of his introduction of Japanese aesthetic culture in crafts to the world”, Gross said.

The ideas behind the Mingei Movement belonged to a wider intellectual exchange occurring in the early 20th century.

Just as the West was being exposed to Eastern philosophy and concepts of beauty, European notions of the arts and design were infiltrating Japan. The latter were incorporated in the Arts and Crafts Movement, led by renowned UK artists John Ruskin, William Morris and Eric Gill, among others.

The raku parties that first captivated the artist in 1911 can also be traced back to the tea ceremony, which places a high value on serving utensils.

Gross explained, “The sensibility of beauty in tea bowls, so clearly described in the writings of the great tea masters, including ideas such as wabi and sabi, were entirely new and very enchanting to Leach…These clearly articulated standards of beauty revolutionised his thinking and gave him a new vocabulary for talking about pots.

“For Leach, Japan was always the paradigm, but he was very mindful of British traditions as well.

“The mingei idea still has an important place in the Studio Pottery Movement and in the ongoing discussion about meaning and purpose in crafts. Even in this eclectic age, in which materials and influences are global, the mingei concept of beauty in objects of daily use is an important part of the discussion.

“In fact we now see industrial designers everywhere working to incorporate the sense of the touch of the human hand in objects made by machines”, Gross said.

Marty Gross will be visiting Tokyo on 10 March to speak about his project.
www.britishcouncil.jp/en
www.martygrossfilms.com