Two of Japan’s most feted garden designers brought home awards from last year’s Chelsea Flower Show, with the judges and critics praising their clever use of plants, space and traditional Japanese elements in their designs. The acclaim was often fulsome, with Robin Lane Fox, the gardens critic for the Financial Times, describing Kazuyuki Ishihara’s Gosho No Niwa garden as the best in the entire show.

Ishihara—who is no stranger to gold medals handed out by the Royal Horticultural Society—used an existing beech tree as a backdrop to his design, creating a Japanese-style garden in which water cascades on one side, surrounded by six varieties of yellow- and purple-leaved acers.

“The moss, rocks and even the glass-fronted garden building work together without gimmicks”, wrote Fox. “On the garden’s reverse side, the back of the high wall is irrigated and planted with mosses, white Solomon’s seal, white Spiraea, variegated Cornus and much else. This spongy natural wall is the best backing in the show.

“Ishihara will design private or corporate gardens and if I wanted a tour de force in a shaded bit of London, I would give him free range”, was his conclusion.

Heart and mind
Speaking to BCCJ ACUMEN, Ishihara said he had taken the official imperial residence in Kyoto as his inspiration, pointing out that neither that palace nor his garden is surrounded by a high wall. It was believed, by those who formerly resided in the palace that, since its garden would not be attacked, walls were not required for protection. It is from this belief that Ishihara derived the English name for his garden: No wall, no war.

“I wanted to get across the idea that the residence was never targeted, but was a symbol of peaceful existence [when Kyoto was Japan’s capital]”, he said.

The biggest challenge last year was incor­porating the moving water into the overall design, said Ishihara, who has competed at Chelsea 12 times since 2004 and won no fewer than nine awards. Other key features that caught the judges’ attention included plant-encrusted rockwork, moss that represented the passage of time and cleverly sited bonsai. The garden-going public also flocked to Ishihara’s design, with many discovering that a small patch of grass behind the garden provided the perfect spot for a picnic under London’s plane trees and overlooking a little corner of Japan in the UK. 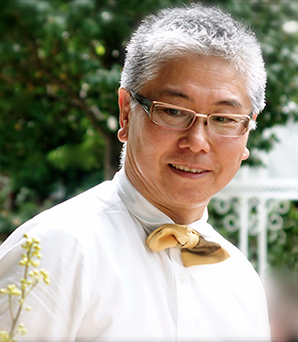 And, aware that he will once again have a reputation to live up to at the world’s most famous garden show this year, Ishihara—described by the Gardenista web site as “the dapper genius of small spaces”—confirmed that he was already considering designs for the event not long after the 2017 show. Preparatory work is already well under way on this year’s entry, called “Omotenashi no Niwa”, which has a better ring to it than the translation: “Hospitality Garden”. The design will incorporate acer trees, moss iris and pine trees as its main components.

“Every year, taking part at Chelsea gives me great pleasure, and this year—because I believe Japan is a country where people think with both their minds and their hearts—I plan to incorporate both heart and mind into my garden”.

Spirit of Zen
Shuko Noda was also competing in the artisan category and his design was rewarded with a Silver Gilt prize, his second in two entries at Chelsea.

“Hagakure”, meaning hidden leaves, was inspired by the 300-year-old samurai text book of the same name (The Book of the Samurai in English) from Noda’s home prefecture of Saga. The volume teaches society’s values and a positive way of life. Noda himself studied the book as a boy.

“Hagakure is a spiritual code that describes how life and death exist side-by-side, and how none of us can predict when we will have a new encounter or have to say farewell to life”, Noda told BCCJ ACUMEN.

“This garden provides something for each of life’s five senses and is a place where each one of us can be thankful for the opportunities that life provides”, he added.

“I wanted British people to observe a garden that feels quiet and rich in the spirit of Zen”, he said. “The visitors are imagined to be a busy, stressed-out, urban-dwelling family, and this garden will provide a restful break, healing and tranquillity from that daily life and give them new energy for tomorrow”.

Green-fingered Noda had intended to take his team from Saga to London to create the garden, but budgetary restraints meant that he worked with a British crew, although he had nothing but praise for the “good chemistry” that developed during the build. The secret, he confided, was to communicate, remain positive and “make an effort to keep smiling”. Plants incorporated into the design included white-flowered Cornus kousa, intended to remind visitors of the white of a monk’s clothing, accentuated by Iris japonica and hydrangeas. The garden also featured a tatami mat bench in the shade of a tree, providing an oasis of serenity away from the hustle and bustle of everyday life.

Noda said he was “very happy” after learning of his award, and immediately informed family and friends in Japan by phone. 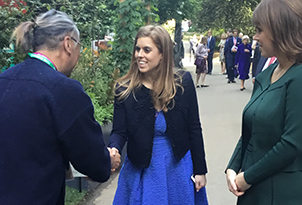 “The Chelsea Flower Show is the most famous and authoritative show in the world; the examination standard is high but fair”, he said. “In addition, the event brings together the very best designers and their staff, so we are mutually inspired by each others’ work, attention to detail and techniques”.

And, like Ishihara, Noda is also making plans to return to west London. “We will not compete this year, but I do plan to go back again, maybe in 2019 or 2020”, he said. “And next time, I aim to bring together a ‘Team Japan’ instead of just a ‘Team Saga’.

“We want to be more ambitious by forming a team of talented gardeners from all across Japan”, he added. “The size of our dreams can only grow from now on, so be ready for something truly special next time”.