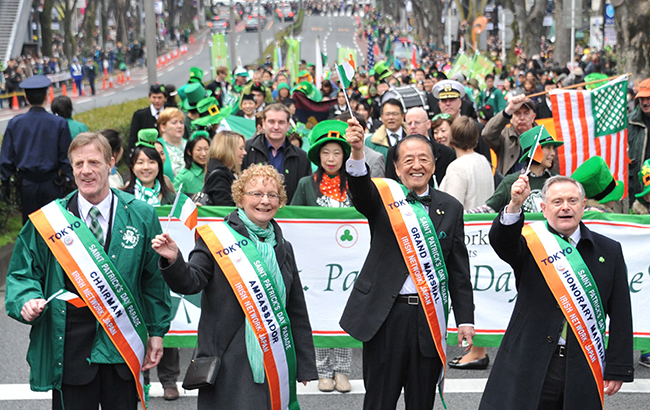 St. Patrick’s Day, Ireland’s national day celebrated on 17 March, is becoming better known in Japan, especially in Tokyo. It is wonderful to see this festival being more widely recognised, as it is a great opportunity to introduce Ireland’s culture.

The first parade in Japan that celebrated St. Patrick’s Day took place in 1992, in the Roppongi district. Some 12 parades are now held each year throughout the country, from Chiba to Okinawa Prefectures. Many shops stock related goods and green items around this time. 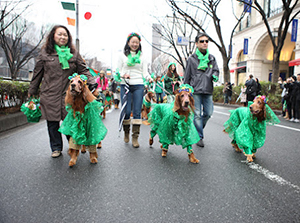 This year, events will again take place nationwide. In Tokyo, on 20 March, there will be a parade in Omotesando, featuring marching bands, dancers and Irish dog breeders who will bring their wonderful red setters and Irish wolfhounds. Nearby, in Yoyogi Park, guests can experience a day out for the whole family, with Irish music, sports, food and much more at the I Love Ireland Festival.

Thanks to the involvement of local people, there are many local variations on the traditional St. Patrick’s Day celebrations. In Shimane Prefecture, for example, there is a procession of boats around the moat of Matsue Castle. Matsue City has a strong link with Ireland through Lafcadio Hearn, an Irish writer—also known as Koizumi Yakumo—who spent much of his later life in Japan.

Like Matsue, most of the host cities throughout Japan hold the celebrations due to their Irish connections, whether they are personal or business-related. In addition, there are many friends of Ireland in Japan who are dedicated to putting on great community-based activities. The popularity and excellence of the events can be largely attributed to their support, as well as to the existence of a great number of people who love going to festivals. 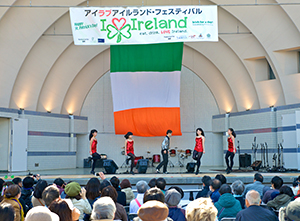 Dancing is performed at the I Love Ireland Festival in Yoyogi Park.

St. Patrick’s Day events in Japan have an extremely positive impact on Ireland­–­Japan relations. We are especially looking forward to next year when Ireland will celebrate 60 years of fruitful diplomatic ties with Japan.

Wherever you are, why not join the fun? Wearing something green on the day is recommended, but not compulsory. I hope more and more friends of Ireland in Japan will embrace this great opportunity for friendship and cultural exchange.