The brightest and the best from the UK business community were once again recognised at the annual British Business Awards (BBA), held on 11 November at the Hilton Hotel in Tokyo—and with 277 guests, the event was the second biggest the British Chamber of Commerce in Japan (BCCJ) has hosted in its 68-year history.

The ninth awards ceremony took DRIVE as its over-arching theme and recognised innovation, entrepreneurship, commitment to community, contributions to the UK–Japan partnership, business success and individuals’ achievements, with 28 nominations across six award categories. 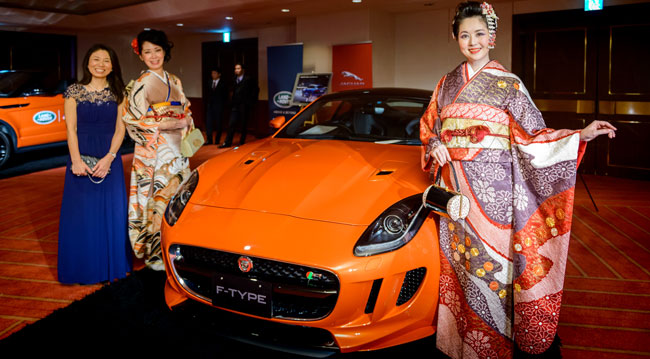 Guests posed next to a Jaguar F-Type.

The glittering evening commenced with a Champagne reception, the delicious United Kingdom Cuvee Grand Cru Brut provided by Berry Bros. & Rudd, and accompanied by a selection of British music classics, from Roxy Music through Elton John, the Rolling Stones and The Beatles.

The ballroom doors opened to the soft tones of saxophone soloist Marcus Pittman on the stage as guests and nominees—nervous or nonchalant—found their way to their tables.

Other guests admired some of the other 100-plus prizes provided by generous sponsor firms and organisations, including luxury stays at the ANA InterContinental Tokyo, the Peninsula Tokyo and the Grand Hyatt Tokyo, a city tour with Walk Japan, a Brompton bicycle and bottles of Johnny Walker Blue Label whisky.

Later in the evening, a guest won a pair of return tickets to London courtesy of British Airways after taking part in the BBA’s traditional game of heads or tails. 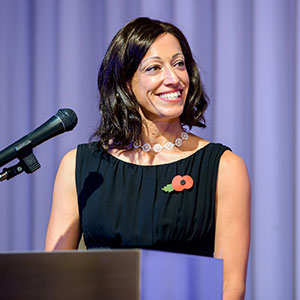 Essence of drive
Revellers were summoned to their seats by Guy Perryman and Madoka Kato, the voices of London Hit Radio on InterFM and joint masters of ceremonies, who got the evening under way by introducing Emma Hickinbotham, BCCJ interim executive director. She used the occasion to congratulate Executive Director Lori Henderson on the birth of her bouncing baby girl, named Hope, just a few days earlier.


The microphone was then passed to David Bickle, president of the BCCJ, who thanked Ambassador Tim Hitchens CMG LVO for presenting the awards for a fourth consecutive year, although he expressed regret that it would also be the final time, as the envoy’s tenure ends in December. 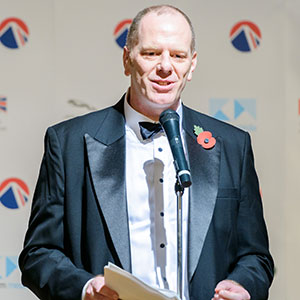 Expounding on the theme of the evening, Bickle said the “essence of drive is about never ceasing to try to exercise ourselves to the maximum of our abilities, because we are capable of amazing things.

“I think that all our nominees tonight have this fighting spirit, and the desire to challenge themselves to break through limitations”, he said. “They embody the qualities of drive and determination and I sincerely hope that some of these qualities will rub off on the rest of us tonight”. 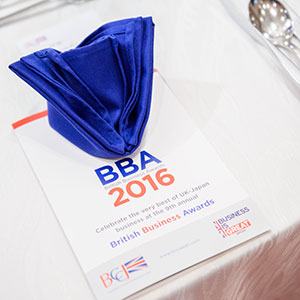 Black Angus Beef Wellington was on the menu.

The grapefruit Champagne sorbet with raspberries paved the way for the main course of Black Angus Beef Wellington, which was accompanied by mint hollandaise, gratin potato and string beans. The dinner was then rounded off by a dessert of pumpkin chocolate syrup sponge and cream cheese ice cream.

Throughout the meal, waiters delivered a selection of Berry Bros. & Rudd fine wines, including a white Burgundy, a Sauternes and St. James’s Finest Reserve Port. Each table also enjoyed a bottle of Isle of Arran 18-year-old single malt whisky or a Kilchoman Machir Bay single malt whisky, courtesy of Whisk-e.

With the conclusion of the meal, the evening took a decidedly Liverpudlian turn as The Mayflowers took to the stage to perform a number of songs, including spirited renditions of Twist And Shout and Eight Days A Week, as well as This Boy. 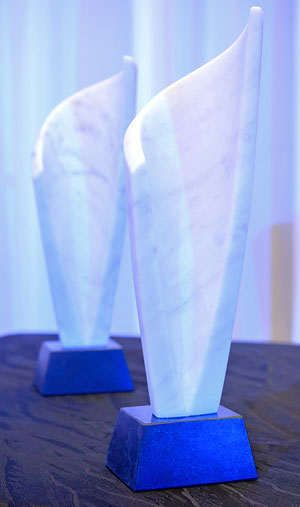 The trophies were again sculpted by Kate Thomson.

Shining lights
Attention then turned back to the main stage, where the BBA statues, created once again by Kate Thomson of the Ukishima Sculpture Studio in Iwate Prefecture, awaited the winners.

“The challenge of making the trophies is to resolve complexity into simplicity”, Thomson told BCCJ ACUMEN at the event. “I designed this year’s awards to suggest a sail catching the wind to drive itself, and whatever it is steering, forward.

“The Carrara marble is carved into an elegant curve carrying the momentum of the movement upwards, symbolising the pace, determination and progress demonstrated by all the innovative firms and individuals nominated for the awards”, she added.

The awards
The first award of the evening was in the Entrepreneur of the Year category, which went to Tamao Sako of The British Pudding for her achievements as a Japanese expert on British baking and cuisine, as well as for her success in this year’s Gourmand World Cookbook Grand Prix prize for Igirisu no Katei Ryori (British Home Cooking).

The next presentation, for Community Contribution, went to Klein Dytham architecture for generating positive change in communities through its construction of temporary housing units in the Tohoku region and Kumamoto Prefecture after recent disasters in both places. The firm was also recognised for its revitalisation of the T-Site complex in Daikanyama, and for building communities in more than 900 cities worldwide with the creative PechaKucha Night presentation format.

The award for UK–Japan Partnership went to the Japan Association of Overseas Studies and the British Council for launching a summer study in the UK programme for senior high school students from Japan.

The fourth trophy was in the Person of the Year category—the only one of the awards in which members of the chamber were each given a vote. Jacky Scanlan-Dyas of Hogan Lovells went away with the award for her efforts to preserve the strength of the UK–Japan commercial relationship by helping Japanese firms determine the impact of Brexit on their operations, as well as for leading pro-bono and gender equality projects.

The penultimate award, recognising Innovation, went to AstraZeneca K.K. for its commitment to Japan, exemplified by the successful launch of its innovative anti-cancer drug Tagrisso, as well as initiatives to expand and expedite access to treatments for Japanese lung cancer patients.

As is tradition, the final award of the evening was for Company of the Year, with five well-known firms battling it out for the trophy.

GlaxoSmithKline K.K. (GSK) emerged victorious, with the firm rewarded for its efforts to help people to do more, feel better and live longer, for widening access to its products and for its commitment to assisting Japanese society.

Philippe Fauchet OBE, president of GSK Japan, said he was delighted to accept the award on behalf of all his staff, adding that “the UK is very strong in the pharmaceuticals field and it has been a pleasure to compete in this category”.

The final act of the evening fell to Bickle, who invited Ambassador Hitchens and his wife, Sara, on to the stage to thank them both for their efforts to enhance ties over the previous four years. 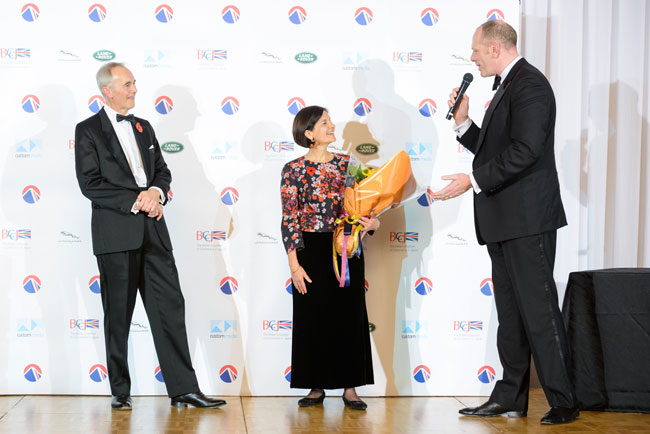 “You have been a fantastic ambassador for the UK–Japan business relationship, and we all wish you both well in the future”, he said. 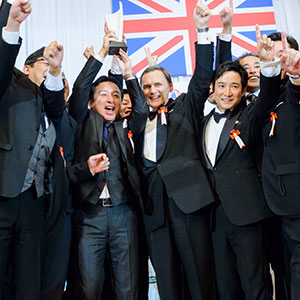 Company of the Year
GLAXOSMITHKLINE K.K.

Reforming their business model to ensure that patients remain the top priority, GlaxoSmithKline K.K. have made significant changes that have furthered their contribution to the health sector in Japan. They have shown commitment to their patients through increased accessibility to products, contributions to medical sciences and promotion of better CSR activities under their Orange Banner. 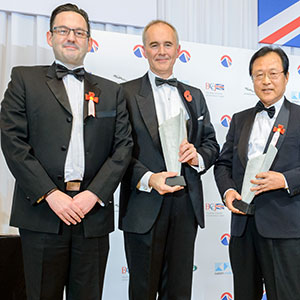 The Japan Association of Overseas Studies & British Council have created new ties between Japanese agents and UK English language schools through their Summer Study in the UK Programme for Japanese Senior High School Students. This has established educational opportunities for young people in both countries, which has aided further cultural understanding and, in addition, helped to advance UK–Japan relations in trade, politics and commerce. 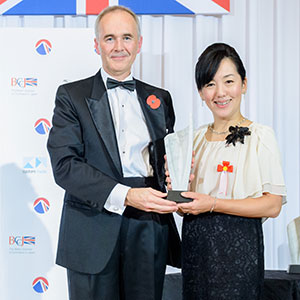 Entrepreneur of the Year
TAMAO SAKO (The British Pudding)

Tamao Sako’s interest in British baking and cuisine was the spark that turned her passion into a business. Now recognised as the Japanese expert on British cuisine, her success has garnered her a reputation that has seen her appear on NHK television and receive this year’s Gourmand World Cookbook Grand Prix prize for her British Home Cooking cook book. 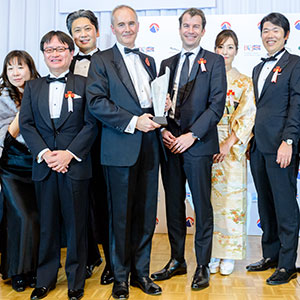 With the launch of its innovative anti-cancer drug Tagrisso and initiatives to expand and advance access to treatments for Japanese lung cancer patients, AstraZeneca K.K. (AZKK) has shown a strong commitment to Japan’s health industry. AZKK are also making strides in developing their oncology portfolio to address quality of life and therapy for Japanese patients. 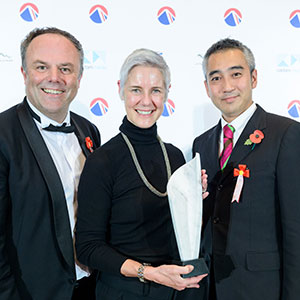 Through the provision of temporary housing areas in the Tohoku region and Kumamoto Prefecture, Klein Dytham architecture has generated positive change in Japanese society. Other projects also include the revitalization of the T-SITE complex in Daikanyama, the creation of new spaces in Ginza and the generation of communities in over 900 cities worldwide through the creative platform PechaKucha Night. 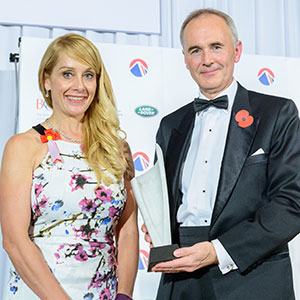 Person of the Year
JACKY SCANLAN-DYAS

With a background spanning four continents, Jacky Scanlan-Dyas, corporate partner at Hogan Lovell’s Tokyo Office, also acts as the company’s Brexit spokesperson. Scanlan-Dyas has helped to preserve the UK–Japan commercial relationship, aiding Japanese businesses with their analysis of Brexit’s impact. She also sits as the chair of the Hogan Lovell’s Citizenship and Diversity Committee and is on the committees of Women in Law and Breaking Barriers.