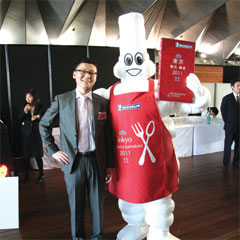 The latest guide—available in English and Japanese versions — includes the ANA InterContinental Tokyo, which celebrates three Michelin stars: two for its elegant Pierre Gagnaire restaurant, featuring the French chef’s innovative interpretation of classic French cuisine; and one for its Karin Chinese Restaurant.

“We are especially delighted that Pierre Gagnaire has been recognised by Michelin in the restaurant’s first year of operation at the hotel”, Fergus Stewart, ANA InterContinental regional general manager, told BCCJ Acumen.

The Conrad Tokyo celebrates the awarding of a coveted Michelin star, for the fourth year, to China Blue, renowned for chef Albert Tse’s avant-garde Chinese cuisine; and another star, for the third consecutive year, to the hotel’s Gordon Ramsay at Conrad Tokyo restaurant. “Cooking is a passion and to receive recognition by Michelin for this is the ultimate accolade”, said multi-Michelin star chef Gordon Ramsay. 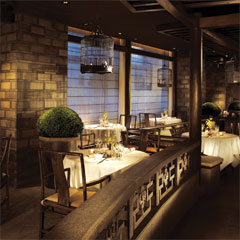 “It is a great honour”, added chef de cuisine Shinya Maeda, who was handpicked by Ramsay as the first Asian chef to take the helm at his only restaurant in Japan. “The Michelin star is an inspiration for all chefs to achieve our very best”.

Jean-Luc Naret, director of the guide, said the award of one star is for the quality of cuisine. “They, and other one-star restaurants, are not only among the best restau-rants in Tokyo, Yokohama and Kamakura, but also in Japan, as well as among the best 1,952 restaurants in the whole world”.

Chinese culinary traditions were again recognised with the awarding of one star for the third consecutive year to The Peninsula Tokyo’s Hei Fung Terrace, a firm Tokyo favourite for its refined Cantonese cuisine served in an authentic Suzhou garden setting. “This is a great honor and recognition of chef Frankie Tang and his talented team, who serve some of Tokyo’s finest Chinese cuisine”, said Malcolm Thompson, Peninsula general manager.

French food reigned supreme at Hilton Tokyo’s Le Pergolèse, which received one star for the second year running. The sister of its one-star Parisian restaurant owned by chef Stéphane Gaborieau has chef Hervé Garnier from Paris firmly at the helm to deliver Gaborieau’s recipes and creative philosophy. 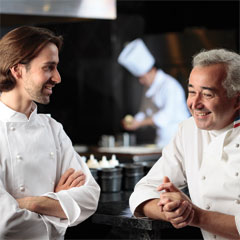 The guide also classifies hotels according to order of comfort. It has placed The Peninsula, Shangri-la, Conrad Tokyo and Grand Hyatt in the highest “luxury” category, and the ANA InterContinental and the Hilton Tokyo in the “top class comfort” category.

One of the oldest European hotel and restaurant reviews, the famous red-cover guide was introduced in 1908 to make travelling easier by providing simple recommendations of food and accommodation throughout France. In 1926, a star was introduced to denote good cooking. Two and three stars were added in the early 1930s.

Every year, Michelin updates its rigorous guides based on anonymous evaluations.

Michelin stars have the same value all over the world, and apply only to “what is on the plate”. The criteria for awarding stars are: