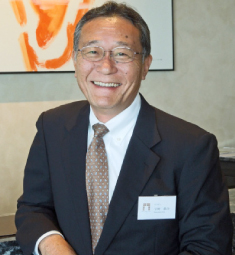 Designed to be infused with feelings of intimacy and avoiding what some consider sticking points of high-end hotels, it provides guests with a relaxed and intimate experience, and staff with flexible roles. Yet, it embraces the traditions of the surrounding downtown Asakusa area.

Indeed, when the Gate announced its opening, it was saying as much about its management ethics as its business status.

“Usually, in a hotel, facilities are vertically organised, so there is no continuation between the restaurant, the rooms, the banquet hall and so on”, said Keisuke Uno, general manager. “Here we are focused on a more lateral approach. So, at the bar you will be greeted by name, not with a perfunctory ‘irasshaimase’, (welcome)”.

The hotel décor does much to convey intimacy. The 137 guest rooms—of different sizes but spacious by Japan standards—are tastefully decorated with muted dark wood fittings and soft green and brown carpets that greet you with a hug rather than a handshake. The restaurant is designed more as a bistro than a run-of-the-mill hotel dining hall. 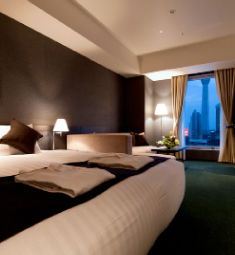 High-quality Slumberland beds for peace of mind and comfort.

“We wanted to create a feeling of closeness, where guests can retreat and relax”, explained Uno. “We certainly do not want guests to feel closed in, and wish to meet all their needs”.

Inward looking the hotel is not, neither literally nor metaphorically. Perhaps its most prominent feature is the view. From the restaurant terrace and the 14th floor outdoor terrace, the vista features such well-known landmarks as the Senso-ji temple and Tokyo Skytree, symbols of old and new for which this part of Tokyo is acclaimed.

The Gate has been created to become an integral part of the local eclectic mix, welcoming tourists off the street and local residents to the hotel bar and restaurant, while encouraging guests to explore the area’s restaurants and bars, according to Uno.

Indeed, hotel staff are compiling an in-house guide to restaurants, bars, businesses and other places of interest in the area. The guide will be available in English, Chinese and Korean. 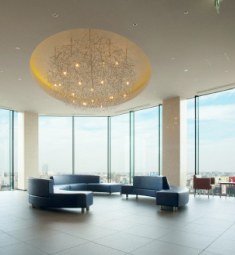 Spectacular views of Tokyo Skytree from the 13th floor lobby.

“Asakusa has long been known as both a hub for entertainment, including jazz and opera, and a place that has frequently reinvented itself and adapted to change”, he said. “The area has a rich history, and its immensely proud people have great vitality. We want to be known as a place about which people say, ‘If you want to know about Asakusa, go to the Gate’”.

The hotel’s customer profile is aged 35 to 60, those who will appreciate the intimate atmosphere of the hotel and its surroundings, Uno said. “Hotels really struggled following the 3/11 disasters in Tohoku last year, and many hotels, especially business hotels, reduced their rates to try and attract guests”, he explained. “But we have no intention of doing so, confident our continuous service will be a magnet for a discerning clientele”, he added.

The type of customer targeted is reflected best in the choice of beds and trimmings at the hotel, he said. While the Heavenly Bed by Simmons is all the rage at other Japanese hotels, staff at the Gate decided that it does not fit their concept. Instead, they chose the classic comfort of the maker’s Slumberland.

“We did not wish to jump on the bandwagon when it came to the most important item in a hotel that promotes intimacy and relaxation”, said Uno. “We wanted something that is high quality, and assures peace of mind and comfort. Slumberland ticked all those boxes”.

Meanwhile, the hotel’s showpiece room, called simply “The Gate,”—a 58m2 suite—brings together old and new, with classic William Morris wallpaper and modern furniture, to create what Uno has termed “traditional, with modern trimmings”.

“Originally, the room was nothing to write home about, so we went back to the drawing board and rethought the design. If it was just a room with William Morris wallpaper we would have something very nice and traditional, but not in the innovative style that exemplifies our originality. By bringing in modern elements, the designer was presented with a challenge, while we were provided with a truly different, and special, room”.

While the combination of two British firms was ultimately a coincidence, utilising the UK brand during the year of the 2012 London Olympics and Paralympics certainly was not.

“As a marketing strategy, we thought the British angle would go down well during Olympic year,” said hotel marketing manager Mitsuko Ikeda. “What’s more, our concept of ‘intimate’ is close to that of Slumberland’s, so it was a perfect match. The focus on developing technology for relaxation in a very traditional firm such as Slumberland also mirrors the overriding ethos of the Asakusa area”, she added.

Meanwhile, a standout item at the restaurant, which is broadly termed “casual French” but also incorporates a number of other European cuisines, is roast beef, Uno added.

Uno is also confident that the hotel’s outdoor bar will ultimately mould the type of clientele that will stay at the hotel. Prospective clients are some 75% Japanese, with the rest being foreign residents and visitors from abroad.

“But, depending on how we decide to manage such spaces as the outside bar, that may well change”, he said, with reference to many Western people’s love of eating and drinking outdoors. “I believe the percentage balance could change, which would be great. One good thing is that this Gate is open to everyone”.